IDF Analysis and it’s a ‘Told You So’ posting.

IDF recommends only two aircraft carriers and postponing order for third and cheaper development of Andaman and Nicobar islands as fixed carrier landing grounds for operations with refueling up to 2000 miles radius in support of ships, drones and submarines. India has to worry what China does so Dhoklam situation is laced in to this posting to show what can happen. Andamans need development and can be India’s employment and economic asset to wean away the wealth of the East. Today it is closed for Indians or FDI investment few undertstand so like in Himachal and Kashmir lots is BENAMI that PM Modi is after. 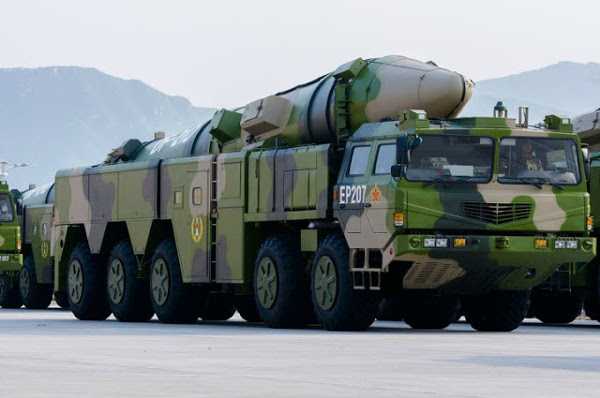 The A & N can become a threat in being with Indian Naval Air Power with few of the 12 P8i and a Embraer AEW and SU-30 MKIs out of the 272 of the IAF based there , in a Land Air Sea Battle strategy with the new ‘Gung Ho Army’ better armed under BJP PM Modi’s muscular government which will not tolerate pandering. Indian Navy is waiting for the 4 LPD order as Larsen & Toubro Ltd which makes nuclear submarines and OPVs etc and a new kid on the block Reliance Defence of GUJRAT with they say L1 insides. Both bite nails for the order with DCNS and NAVATIA. IDF has predictions from Paris Air Show. Then India will have Amphibious Expeditionary Forces too.

Big ‘flat-top’ aircraft carriers will be vulnerable to the new generation of anti-ship missiles, which the Chinese and Russians are manufacturing in quantity, and which even such nations as Iran and Pakistan are trying to acquire, and to launch from submarines and Pakistan did one test.

It needs noting a carrier will need screening and be vulnerable if it heads out of Malacca Straits even if it operates with a US Task Force in action. US Navy wants Indian Navy to join South China Seas patrols. Indian Navy does well by 17 SIMBEXes with Singapore Navy and operates in the South China and has been given freedom of Navigation for White (Merchant) Shipping. No objection has been raised for Indian warships on Innocent Passage as per UNCLOS 1982 to Ex Malabar in Japan Seas or RIMPAC passing through South China Sea. Its USN that China tests.
It also needs noting the Prime Minister of Singapore India’s closest Strategic Defence Partner was not invited to the Border and Road Initiative (BRI) Conference to Beijing and India abstained with objections to CPEC as joining India feels would have lost sovereignty it claims. 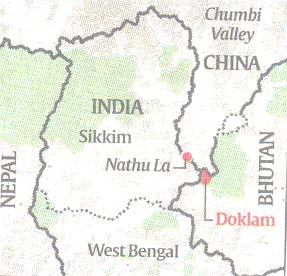 China raised the bar and objections and some analysts say the Dhoklam (Chinese Dhok La) plateau stand off is a result of the snub and Dalia Lama’s visit to Tawang where Indian Army is strong. If the Dhok LA map is to be analysed and U tube watched and if its true, tough Indian soldiers have grabbed and gripped smaller Chinese soldiers, asking them to go back. The geography allows a trap in to the V shaped area with Bhutan co-operating. All books say Chumbi Valley Tri-junction will be a challenge to settle for a correct and fair border. The end will show who’s will is stronger as its far from Beijing.

So india must look to other services too and when India’s economy is on the upswing the third carrier can be ordered. IDF does not rule out that. But IDF does not want a multi-billion-pound hole in india’s defence budget and just cannot understand why 12 Multi Role Helicopters RFP of $ 700 mill was canceled for the new P 17/15 AB ships as reports came in at Paris Air Show and some media said the aging Sea Kings and KA-28s will be upgraded and PM Modi is going to Israel and defence deals are on the cards media reports.

As Chinese say may you live in interesting times. 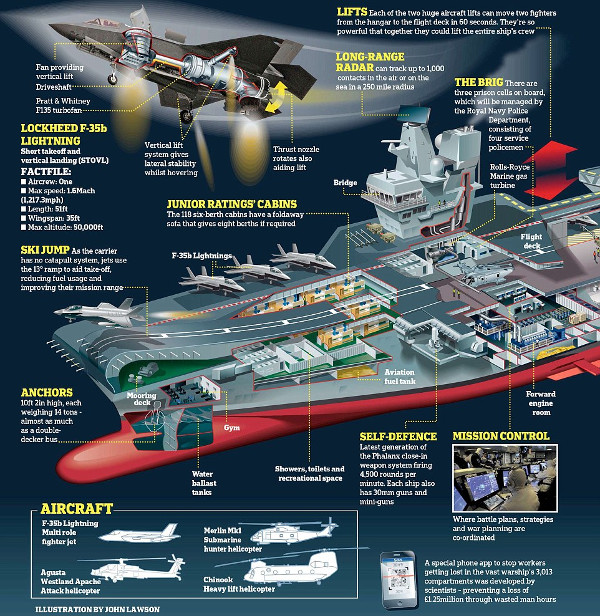 In 2002 First Sea Lord, now Admiral Lord West of Spithead, who went on to become a Labour Minister, urged that, if Britain was to be a modern sea power, ‘a worthy ally of the U.S’, Royal Navy needed giant platforms to carry the American F-35 fighter then under development.

As explained in Part 1 many in the Royal Navy and in UK are regretting the decision as there are less ship and submarine commands and platforms for deployment and more Admirals. The cost has crippled the Defence Budget as inflation is a fact of life and Brexit has come as a surprise. At the outset the new carriers reflected delusions of grandeur, and the F-35s looked like becoming much too pricey for Britain’s status as a medium-sized nation and now it’s been called an embarrassment as only 12 F-35s have been ordered at a huge cost. 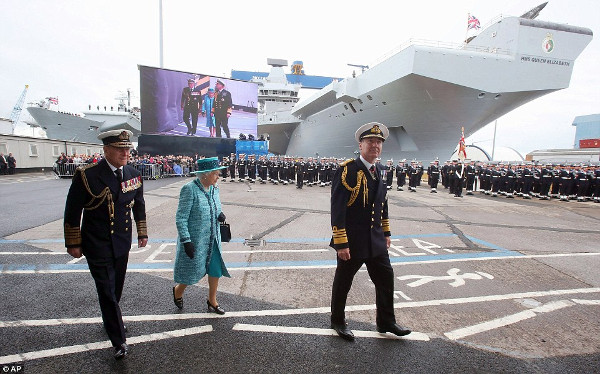 F-35 is the follower replacement of F-16s so President has offered one full assembly line to India which looks a like Rs 1 offer but make the planes for India like Russia gave India Gorshkov free if we bought two nuclear submarines and Maritime TU-95’s which was Brijesh Misra’s plan as a nuclear bomber. IAF shot down the TU-95 as they had seen in Iraq and Navy could take only one Nerpa (Chakra). These are lessons on aid and defence planning with Strategy.

PART THREE WILL DISCUSS USS GERALD FORD VIKRANT AND CHINA’S SHANDONG CARRIER AND FUTURE PLANS SO LESSONS CAN BE LEARNT.