After reverses in tank warfare and the fight put up by a small nation to fight it out in cities another severe blow was dealt to the Russian Navy in the second bloody month of the Russo-Ukrainian war. President Volodymyr Zelenskyy broke the news that the flagship of Russia’s Black Sea Fleet, the powerful 11,000 ton Slava class cruiser the Moskva had been hit by one or two Neptune ‘fire and forget’ Soviet era upgraded missiles, fired from a shore battery on 13th April, 2022. Moskva was built in 1976 at a Nikolayev shipyard, and commissioned in 1983 in the Soviet era during the Cold War and Ukraine housed many USSR Military Industrial Complexes listed later, and, incidentally INS Vikramaditya India’s aircraft carrier was built at Nikolayev’s Chernomorskiy yard as also PLA(N)’s carrier Liaoning near Mariopol, which is under siege. On 21st April Russia officially admitted the ship had sunk and one sailor has died and 36 are missing, and 396 have been rescued to Sevastopol its home port in Crimea, which must have been a Herculean task in choppy seas with high waves as the ship was reported off Odessa on patrol. 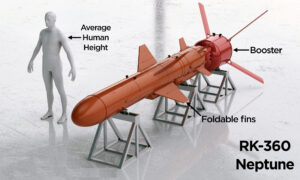 Moskva was apparently within the range of the low flying Neptune missiles and Ukraine must have been fed 24×7 with the Maritime Domain Awareness(MDA) from plots from NATO’s operation rooms to target her, as Internet has not been disrupted during the war. NATO’s Maritime Recce(MR) planes and satellites must have also provided intelligence. Turkey next door is a member of NATO. This sinking brings out the importance of MDA in any maritime scenario, and the Indian Navy lays great emphasis on MDA and employs its 12 Boeing P8i-737 planes for longer range surveillance besides other inputs and feeds them into the Indian Navy’s Information Management and Analysis Centre’s (IMAC) Fusion Centre at Gurgaon. The IMAC has reps of friendly navies and member nations have access to the IOR plot, while a classified plot is also maintained as Standard Operating Procedure(SOP) as all Navies do, and software allows for it. Indian Navy learnt a lot from useage of the CENTRIX Internet system provided by US Navy with Sea Riders for Exercise Malabars and from the Maritime Fusion Centre in Singapore.

The R-360 Neptune missile with increased range is a potent anti- ship cruise missile with a homing radar and ‘one shot kill’ homing ability based on the Soviet Zvezda Kh-35 Uran with 140 km range with improved electronics, that Ukraine Navy refitted on ships and ashore on mobile vehicles in 2020. Incidentally Uran is supposed to be a copy of the US Harpoon. The Indian Navy is familiar with this missile and has operated KH-35 Missiles on the Kora and Delhi Class ships, and Kh-35 is operational on the Mig-29Ks. Indonesian Navy inducted R-360s/Yakont type in the 1980s on their second hand Dutch Leanders and R-360 is the precursor of the BrahMos NPO Mach missile now fitted in all large Indian Navy combatants, with increased range to around 499 km after India got cleared from the Missile Technology Control Regime(MTCR) in 2016. The MTCR had placed restrictions on import and export of rockets and unmanned aerial vehicles(UAVs) of delivering a payload of above 500 kg (1,100 lb) and to a range of only 300 km (190 miles) and on equipment, software, and technology for such systems. India formally applied for membership to the group in June 2015, with active support from Russia, France and the United States, and officially became a member on 27 June 2016 with the consensus of the 34 member nations. China is not a MTCR member but has agreed to abide by the rules.

This sinking is a defining loss for Russia as Moskva was operational and had taken part in the attack to take Snake Island and its Osa AA system with 64 missiles and fast firing AK-630 guns that India also produces in India for its ships, and radars provided air cover to the Black Sea Fleet. Russia claimed there was a fire on board but did not state the cause or details of the fire. The last Russian flagship ever sunk in Russian history was by the Japanese Imperial Navy in the Battle of Tsushima 1905 off Port Arthur in Siberia, now named Dalian, which is a large PLA(N) submarine building base today. In analysis, Moskva was forty years old but she was upgraded in the 2000s with newer electronics and sixteen angled P-500 anti ship missiles on deck and weapon systems like the AK-630 fast firing guns, the Fregat radar and torpedoes, and should have had good stability, anti-missile protection like chaff and EW, and good watertight integrity. Normally a missile cannot easily sink a large warship but it must be noted Ukrainians claimed they had fired two 870 kg Neptune missiles with 150 kg warhead from ashore and considering the terminal low altitude of the Neptune missile, it can be assumed that the missile hit the superstructure or near waterline which has 16 missile launchers and was damaged extensively as depicted in the photographs, possibly with sympathetic detonation of the ammunition on deck. The Kamov helicopter on board seems to have taken off, a photograph showed and must have done rescue work.

The Russian Navy is predominantly a conscript Navy with less emphasis on the Black Sea Fleet with its older warships based there, and it is questionable how well the crew was trained for damage control, and till an inquiry releases details, Navies will be speculating on this sinking. Indian Navy will study the possible causes of sinking as it has commonality in systems and construction, and whether sympathetic explosion of ammunition on deck could be a cause, leading to the sinking, and wisely Indian Navy’s latest ships have missiles fitted below deck. Any explosion of ready use ammunition on deck can only cause local damage which can be contained by the crew.

Indian military still depends on Ukrainian Military Industrial Complex units and will have to deal with the break in supplies of gas turbines from Zorya-Mashproekt for the two Krivacks being built at Goa Shipyard Ltd(GSL) and both the Indian Navy and Air Force as operators of Kamov and MI-17 helicopters may see a break in supplies from the Motor Sich Joint Stock Company as it supplies the TD3-117 engines for these helicopters. Indian Air Force and Hindustan Aeronautics Ltd(HAL) are involved in the up gradation programme of forty one Anatov AN-32 planes which is planned to be completed by 2024-25. The upgrade in advanced avionics, navigation and communication equipment and the process may see delays. There is much to learn from this unusual war that Goliath(Russia) a powerful military is fighting with a tenacious smaller David(Ukraine), which has fought with  faith, courage, commitment, and resilience. 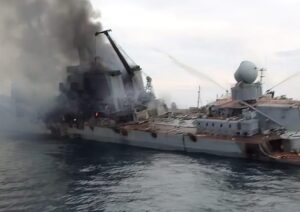 The war is into its third month with devastation of Ukraine and Putin has accepted his troops cannot fight in cities called FIBUA— Fight In Built Up Areas, Russian tanks are susceptible to be hit by anti-tank weapons and drones in the hands of courageous Ukrainian soldiers men and women and now Russian ships can be hit by  Ukrainian sea attack missiles. Putin was asked by PM Modi, ‘what are you doing and where are you going’. And has changed tactics to make Ukraine land locked, take Odessa by missile attacks and a blockade, take Mariuopol by a siege and join it with Crimea, Donbass and Kharkhiv and claim Object Achieved on Victory day 9th May while remnants keep fighting. China is laughing it way to the bank as India’s and other trade has increased growth is 5.5% and will without war. India must hoist lessons as 1994 Parliament resolution is to take POK and analyse the US wars in Vietnam, Middle East and against Taliban in Afghanistan and this will be the next CDS’s job.

Cmde Ranjit B Rai is a Naval Analyst and Member of NMF and the  Curator of NEW DELH’S only Maritime Museum at the C-443 Defence Colony Basement open for Visitors and children Free 1030-1300 and 1600-1900. See PDF attached.

Previous Post: CHINA & RUSSIA ARE CO-OPERATING AGAINST USA & BIDEN IS SET TO BREAK INDIA’S TIES WITH RUSSIA WITH CAATSA UNMINDFUL THAT RUSSIA IS OUR DEFENCE & NUCLEAR LIFE LINE & USA ALSO LOOKS TO A MARITIME BASE IN INDIA WITH PROMISES —-IS INDIA IN CATCH 22 ??
Next Post: PUTIN HAS PLAYED POOR CHESS AS A RECKLESS LEADER BY NOT APPRECIATING UKRAINIAN’S SPIRIT TO BE EUROPEAN NOT RUSSIAN AND DISRESPECTING THE 1994 BUDAPEST MEMORANDUM NOT TO USE FORCE AGAINST UKRAINE WHICH ACCEDED TO THE NPT ON THAT CONDITION