IDF is back with a post from the draft from the book titled, A Sailor’s Odyssey And A Nation’s Navy At War 1971 And Indians Why We Are What We Are. The tussle over the Chairmanship of Tata Sons and its Trust between Ratan Tata son of Naval Tata by his first wife Soono, and Cyrus Mistry son of Shapoorji Pallonji the largest share holder has ended in Ratan Tata’s favour. Salve from London appeared for Ratan and Singhvi for Cyrus. Hope the chapter is closed. Shares of Tatas gyrated.

Ratan a Cornell architect used to walk his dog at the US Club in Bombay. He first headed Nelco a Tata Company. When I was rep for Waterman Shipping USA we carried a parcel of radars for Nelco. One learnt, Jahangir Ratanji Dadabhoy Tata known JRD, a Parsi had groomed Ratan. Parsis were fine people. Names of Adms Cursetji and Ghandhi, Dolly Mehta and Dubash one served, flash from memory. One day a Colonel upbraided Ratan’s aide for walking his dog. Media reported Ratan resigned US CLub, and refused to relent. Guests are permitted in the club. A good example of Dadagiri. 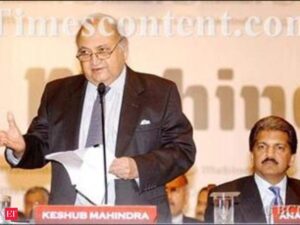 Back to days in the early 1960s in Bombay as Flag Lt(ADC) to Rear Admiral SG Karmarkar MBE Flag Officer Bombay (1961-64) as a Captain in the Merchant Navy had joined the IN Volunteer Reserve(INVR Wavy striped) in the Second War as a Lt Cdr. In the 1946 Naval Mutiny Karmarkar was rushed from INS Shivaji to take command of INS Talwar to end the mutiny, described in my novel, An Underhand Affair(Amazon 2020). He was the first Indian officer to command British on HMIS Cauvery as a Commander, but he lost seniority to King’s commissioned officers. Lt Cdr Soman who I briefly served his Flag Lt, overtook Karmarkar in the Navy List. Gen VK Singh taught tried to break the sanctity of the Army List and I have a chapter on that drama in the book in details with mention of AG Rohinton Nariman and my son. Admiral SM Nanda claimed seniority for his service in the Karachi Port Trust.

SG knew Col Leslie Sawhney a 1940s 16th Light Cavalry office(called the Brown Pandits). Reggie’s brother Cdr Reggie Sawhney became famous for offering to pay for damage HMIS Cauvery to a jetty in Cochin. I served as XO of that famous ship under Cdrs HML Saxena and IK Erry. Reggie migrated to Australia like many Anglo Indians who had built India’s Navy. Periera, Schunker, Atkinson and Hawse one served flash. Leslie had resigned from the Army. He married Rodabeh, JRD Tata’s sister. They had no children. 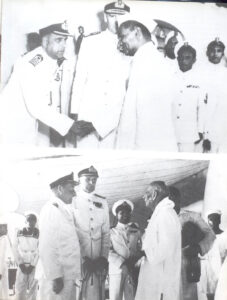 Rodabeh used to request me to help serve drinks when they entertained guests at home as Leslie played golf with Admiral Karmarkar at the US Club. The Sawhneys invited Admiral to their house a few times, and Karmarkar invariably took me along, more to call the car when leaving a party as driver Mendoza would be snoozing.

I recall seeing Hog Larsen, JRD with his petit wife and Inder Malhotra there and Gen Enait Habibulah Leslie’s senior in 16th Cavalry, my Commandant at NDA. We once saw JRD in a queue when we went to see a movie at Excelsior theatre built in 1886 near VT by two Parsis. JRD tore his ticket and said to the doorman, “I will save you some work” and winked at us. I wanted to tell him I was nephew of his Secretary Barbara in Air India, wife of Hari Shivdasani but my wife stopped me.

Over weekends I arranged Karmarkar’s golf breakfast for his foursome at US Club by meeting them at the 8th hole with Leslie and Rajkumar Pitambar a royalty originally from Nepal educated at Oxford who served in the British Army 1954 to 56. Naval officers like Lt Monty Chaterjee later shipmate on INS Nilgiri and Secretary of the Delhi Golf Club, I recall joined. Leslie once asked if I would like to join the Taj where he and Rodabeh were Directors. JRD was hoping his brother in law would head Tata Sons and later after Leslie was no more, JRD mentioned Leslie gave him the idea that led to TCS. I also met the Moolgaokars of Tatas as Mrs Leela Moolgaokar who ran helped INHS Ashvini.

Karmarkar joined Chougules that owned land on Nhava Sheva to make a shipyard. Government blocked it, stating Shipbuilding is a strategic activity. Years later Nhava Seva came up as a port under Mrs Anna Malhotra IAS who displaced Adm Nadkarni’s nomination. Adm Tahiliani made Nadkarni CNS and I had served as his Fleet Operations Officer and then DNI. How later, Adm SK (Tony) Jain lost out CNS position to Adm L Ramdas is in my book, Admiral Vishnu Bhagwat Sacked or Sunk(Manas). George Fernandes banned the book. SG unsuccessfully lobbied with Vasant Rao Chavan to build a deep water jetty for INS Vikrant and the Navy in Gujarat(may be it was Pipavav) sponsored by Tatas. Such was forward thinking of Karmarkars and Tatas who built institutions. Now we have Mandirs and large Statues. History will judge the times not me.

Chavan got premises at Rivera on Marine Drive derequisitioned for himself and Admirals Nanda and David took premises in Brady’s flats in Colaba. Such were quid pro quos, sans money in those days. That too is in my book on Admiral Vishnu Bhagwat who opposed de-requisitioning Dhanraj Mahal by the Defence Secretary to his peril.

In 1967 I approached SG for help. He took me to Jodabeh. She gave me a cheque for Rs 12,000, “Son, go and take possession and come back and meet Mr Agnihotri who will take your flat on rent for Taj. You can pay me when you can”. The General Manager of Taj Mr Guaba a Jew took the place. Taj used to train naval cooks. I recall the Ops signal by Adm RKS Ghandhi in Vishakapatnam to Adm Daljit Paintal (my Captain earlier on INS Nilgiri), “ I hand you an operational Eastern Fleet. Do try Chief Petty Officer Cook Bhattacharya’s lobster thermedoir”.

I asked to get back my flat but Tata policy was not to break leases. Only Ratan Tata could. Luckily friend Partho Circar CMD of Tata Finance took me to Bombay House and Mr Phendse(later fell out with Ratan Tata) smuggled me in to Ratan’s office. He offered no courtesies. I mentioned my father in law Senior Advocate Mr GB Pai a lawyer who set up the firm Menon & Pai in Cochin was a friend of his father in ILO, and could I have the flat back for my son, finishing MBA at Harvard. Gruffly he said “ take your flat back. The more people like him come back, the better for India”. I was out in two minutes. No wonder Ratan Tata had taken on Rusi Mody of Tata Steel and Kerkar of Taj.

Such has been the qualities of Tatas and Parsis and old time Navy seniors who built India’s fine Navy which will be critical for India’s future. I dedicated my book, “The Inner Mental Game of Golf”, funded by Zuari Chemicals to Col Leslie Sawhney and Admiral Karmarkar. I picked up the game late though Leslie had offered to loan me a set. I thought it was an old man’s game. I am wrong. It is a character building game but it is not in favour in current official Hindutva circles. India is embroiled in a majoratarian Hindu rule which the old secular Navy avoided with caste and religion as taboo, and treated these a personal choice.

Working for Waterman Steamship USA our Bombay Agents Vazirani of Maritime and Robinson delivered the Eugene Steel Factory cargo for Mahindras at Khapoli. I recognised Director Rajkumar Pitambar. He recalled days, and graciously invited me to a Chinese meal at Nanking near RBYC. His wife owned a shop next door. Memory fades and times change. A new generation resides in Pilot Bunder. Sadly military has no say in governance and is being sucked in to political favouritism, personified by the Adarsh syndrome. Government is unable to solve the riddle of that multi storied jinxed building in Colaba, as politicians sullied it all. That is another story in my book. . Shan Na Varuna.