This is an IDF analysis of Pakistan’s ‘State of Affairs’, going through rough waters. This is not new as Pakistan’s has been a troubled nation , and despite defeats in war and sponsoring terror, they twist the truth and survive. Their leaders hail from same intelligent and clever stock as those in India, now India in the throes of elections and as Tavleen Singh writes it is a test for PM Modi and BJP as India has made it clear it will not talk to Pakistan or open Track 2 dialogue, and opposition has differing views. Actually, Pakistan survives on its 200 mill strong feudal Muslim population (160 mill in India) and Muslim feudal societies follow the Koran and democracy cannot be imposed on lines as in USA, EU and even as in India. In Pakistan it is military democracy with intermittent civil rule ! In other Muslim nations it is Military led or a Dynastic Family led or Cleric led democracy, torn between Shias and Sunnis. USA attempted to change that and went a cropper, Trump agrees !

India’s democracy is not as perfect as it claims. Scheduled castes, Tribal’s and politicians enjoy a special status and many have Z security called VIPs with huge spending powers for luxury. Military has little say. Much media is subdued and private FM Radio is banned from sports, current affairs and news. China follows Singapore’s one party rule, with autonomy to states and Public Sector Corporations Heads, who are held accountable, and military seniors join Government.

Indian states have limited powers, and the Centre lords from New Delhi and underwrites PSUs losses A–La-Air India. No one is accountable as Minister of Shipping Shri Gadkari confessed at the Navy’s Blue Economy conference before a large International audience. Gadkari is changing the mode of decision making in his domain especially ports and roads, which has seen progress citing his achievement of the Pune Mumbai PPP EXPRESSWAY.
Gadkari suggested to MOD to change, and stop molly cuddling Defence PSUs and shipyards which he said take nearly 10 years to build a ship (his words) and recommended that orders be given to work starved Private Shipyards ! IDF supports Gadkari and looks to him joining MOD for decision making if Parrikar leaves for Goa when BJP wins —wishful thinking ! .

Pakistan Navy is conducting EX AMAN -2017 off Karachi with ships and submarines, and 15 ships from eight nations with reps from 30 nations at the Bahria University Karachi run by the Navy and Civilians in a unique successful experiment. Ex Aman is taking place at the same time when Indian Navy is conducting its biggest ambitious tri-service month long Ex Tropex-2017 with both Eastern and Western Fleets since 24th Jan off Gujarat 300 km away from AMAN after PM’s Commanders’ conference at IMA Dehra Dun posted by IDF on 29th on www.indiadefenceforum.com. Pm has delayed CDS till a Theatre Command Paper is tabled so another committee can be expected !

Army Chief Gen Bipin Rawat embarked INS Vikramaditya with CNS ADM Sunil Lanba to witness Tropex and the full scope of naval activities like BrahMos Missile firing from a type 15A and MiG-29K activities which were blazed on TV. Combined with Agni –V firings and its show on Republic Day, Pakistan conducted under water and missile firings claiming MIRV capabilities. These are signaling signs between India, Pakistan and China which supports Pakistan. A PLA (n) Task Force was spotted in SCS on its way to IOR and possibly HORN OF AFRICA ?

Pakistan’s has connectivity to Central Asia and Middle East and has a 600,000 strong Muslim Jehadi indoctrinated Army and an advantageous maritime geography at the head of the Arabian Sea and Hormuz. China’s strategic connection with CPEC and nuclear Pakistan having a say in the future of Afghanistan makes it a nation that the world powers cannot forsake, even Russia. As Fahd Humayun writes “as Islamabad grapples with the uncertainties of a new Trump administration, a recent timeline of Russian advances to Pakistan is not inconsequential. In 2016 both sides reaching a price accord on a $2 billion North-South LNG pipeline running from Karachi to Lahore in 2016. Russian and Pakistani Special Forces held their first joint tactical exercises last September”. 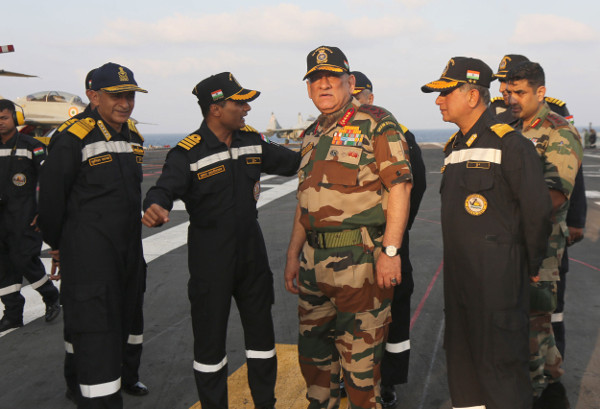 Pakistan is kept out of IORA the only Governmental group on Indian Ocean affairs and begun by South Africa and India as IOR-ARC. Pakistan Navy feels ostracized, and must have welcomed President Trump’s U TURN to accept ONE CHINA policy after a long chat with President Xi Jinping and Pak Army Chief Gen Bajwa’s 20 minute chat with US Defence Secretary Gen Mattis, who knows Pakistan army well and thanked him and assured support, when Gen Bajwa said he will fight all terror groups, AS IDF EXPECTED !

MEDIA briefing for AMAN was held at PN Fleet HQ on 9th Feb by Fleet Cdr VADM Admiral Arifullah Hussaini. In his address he explained that Pakistan, being situated at the crossroad of three important regions of Middle East, Central Asia and South Asia and for its vicinity to the global energy highway, Gulf of Oman and Strait of Hormuz, is considered an important country. Furthermore, the China Pakistan Economic Corridor (CPEC) and Gwadar Port, maritime activity in the North Arabian Sea is likely to increase manifold. Hussiani said that for regional maritime security, Pakistan Navy strengthened its relations with its allies and by sincere efforts at the international level, also has ensured the safety of sea traders.

In addition, two P3C Orion aircraft from Japan (note), five helicopters (accompanying ships of eight of these countries), 11 Special Operations Forces and Explosive Ordnance Disposal and Marines teams from China, Indonesia, Malaysia, Maldives, Nigeria, Russia, Sri Lanka, Turkey, Great Britain and USA are also participating along with delegates. Presence of these friendly navies from all over the world is a manifestation of firm resolve of international community towards peace and stability in the Indian Ocean, Hussiani added.

He added that traditionally, threats to the maritime security arise from the regional conflicts and political interests (hinting). These new security challenges have changed the maritime environment. Today, threats such as piracy, human smuggling and drug trafficking etc have made the security of Indian Ocean more complex. In this changing scenario, maritime security challenges need to be focused collectively by the international community as no country ( net security provider) can counter these challenges single handedly. Therefore, to meet these growing challenges, we need cooperation and mutual trust at regional and international level.

He said an International Fleet Review by all participating ships will formally culminate the exercise to have a platform which can promote mutual understanding and interests, aping Indian Navy’s IFR. The Admiral said that conduct of this Multinational naval exercise AMAN 17, will further strengthen relations of Pakistan Navy with regional and extra regional countries. All this should interest Indian maritime thinkers IDF hopes. IAF Chief ACM BS Dhanoa is to inspect Tropex possibly when his air force exercises over the seas ! Shan No Varuna. Vande Matarom.