This is an IDF analysis of the challenges India faces in dealing with a troubled and beleaguered Pakistan today, that must have gone through thinking Indian and Pakistani minds watching the spectacular Republic Day Parade with India’s military might, cultural and religious diversity (Ram is worshipped in the North and Ravana in the South), colour, splendor and spending power with deft diplomacy. The Deputy Supreme Commander of UAE Armed Forces, Gen Sheikh Mohammed Bin Zayed Al Nahyan, was the chief guest wearing a simple ‘official badge’. PM Modi adopted a naval salute to welcome him. ( link attached)

UAE Arab dignitaries from oil and cash rich UAE came in the Prince’s luxurious plane were in the front rows dressed in Keffiyeh Ghutrahs, with a black circlet of rope ( Agal ) as head gear. Long parades can be boring if commentary is pedantry. Private TV cleverly juxtaposed the parade pictures with a world affairs debate over two hours, and the consequences of the Prince’s visit eyeing the promised but elusive $ 65 bill investment and a strategic partnership that India and UAE signed to balance Pakistan its friend, in the back drop of a Trump Presidency who is battling Mexico on a wall and has imposed 20% duty on imports. The future is for rightist national economy and military power. 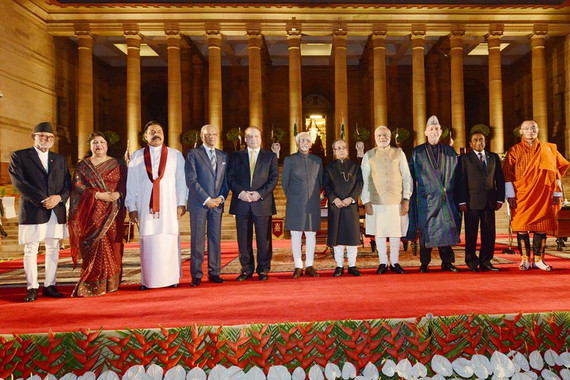 In UAE 2.6 mill (Hindu/ Muslim) Indians, and 1 mill Pakistanis out of 5.3 mill live in harmony. Expatriate minds run the nations services so UAE is well aware of the Indo-Pak politics, and keeps terror away with Pakistani nods, and Police and Intelligence apparatus that IBM and UK has helped set up.

The Crown Prince heads Emirates think tank ECSSR that IDF has attended, but learnt despite requests an Indian Defence Attaché has not been permitted residence in Abu Dhabi on Pakistani pressure, but operates from Muscat. If this changes, then the thaw will look like breaking.

UAE is setting up two nuclear power plants from South Korea and took advice from Indian delegates at conferences they use to strategise for its nuclear and maritime security, which they pass on to a professional agencies to finalise. UAE distributes funds to the other Emirates pro-rata for security. Funnily UAE has a duty free liquor Emirate, Al Ain to quench thirsts, like Bihar in UP, and Gujarat in Diu, and Daman and Haryana had in Delhi. Its inevitable and UAE looks to India for ingenuity (chatturness).

Hence maritime co-operation is on the anvil ( Qatar has a naval attaché and a Coastal Security Chain based on the Indian Navy Coast Guard model, after 26/11) but UAE buys weaponry from the West and has 515 aircraft and 2000 tanks and ICVs built in UAE even for exports to GCC and Europe as ‘off sets’ with Pakistani partners and foreign collaboration and UAE funding and a Shipbuilding yard with few Indian Navy retired but only eight sea going ships.

Research has showed that Pakistan’s Governor General Malik Ghulam Muhammad was the guest at the first RD parade at Rajpath in 1955 and again Food and Agriculture Minister Hamid in 1965, before the war and tells a story. Pakistan is a geographically and demographically endowed Islamic nation with a 60,000 strong battle hardened army that has operated with US in its North West leaning on a Pakistan-China versus India –USA-with Iran thrown in conundrum, for the South Block policy makers of India to solve.

The Indian military has no say but obeys, as by standers, unless and military are challenged to think and not whine in private. Chiefs seldom make a “ policy statement, “ fearing media and political back lash and this time a Combined Commanders Conference held at the Himalayas was in sealed doors so IDF’s analysis is based on a penetrating Urdu word “Tajurba” (intuition) and relies on others’ analysis.

The Navy quietly issues Doctrines and Strategy books of its own as no Navy can expand or act as it is a Strategic tri-dimensional service and is half the strength of Air Force in numbers but quite a maritime power with powerful aviation and nuclear assets to boot, unlike other services sublet to DRDO.

Hence IDF has no option but to table excerpts from what USA’ Gen James Stavridis who served in Afghanistan with Pakistanis in ‘Pakistan Is the Crisis Flying Under the Radar and Trump Needs a Plan for Pakistan’, ( 24th Jan) with IDF comments in parenthesis. James suggests only India Pakistan reconciliation a non starter with current BJP and RSS thinking.

(James sums up the area situation for Trump). QUOTE . The set of foreign-policy challenges headed like a freight train at the Trump administration is obvious: the Islamic State and the associated tragedy of Syria; a bubbling North Korea led by an unpredictable dictator with a fistful of nuclear weapons; an angry China hypersensitive about Taiwan and the South China Sea; and Russian cyber-activity roiling domestic political waters alongside Moscow’s ongoing occupation of Crimea and destruction of Syria. But flying under the radar is a dangerous problem not receiving a great deal of attention: Pakistan!

As the sixth-most-populous country in the world (ahead of Nigeria, and behind Brazil), Pakistan is home to more than 200 mill people by some accounts, the world’s second-largest city, Karachi. First, the Trump administration should recognize that our levers to influence Pakistan are limited — but not entirely impotent. While we can and should be working to strengthen national ties with India, this must be done in a way that is not threatening to Pakistan. ( This is the policy MEA must live with.)

Thus, James says the first best option is to help achieve stability in South Asia is to do all we can to encourage India to try to resolve differences with its neighbor. Washington’s role could include top-level official visits to both capitals; offering unofficial “Track 2” negotiating programs; and explicitly making peace and stability in South Asia a U.S. strategic interest, identified in our national strategic planning documents. (It means India must stop the Kutti).

Second, the Trump administration should increase military assistance to Pakistan in the counterterrorism fight on the Afghan-Pakistani border. A long source of frustration for U.S. military planners — including during my time as NATO’s supreme allied commander responsible for combat operations in Afghanistan — has been Pakistani support for the Afghan Taliban. Afghanistan is key. Such incentives could include more robust intelligence sharing; better surveillance and strike technology; and joint operations. Washington’s efforts to sell weapons, surveillance, and intelligence systems to Islamabad have been uneven to say the least. Setting out a coherent, reliable pipeline of military assistance and sales would be very helpful. A third idea would be to increase soft-power support in Pakistan. (USA cannot forsake Pakistan and has not denied visas to the home of terror state but others)UNQUOTE
The bugles for peace by PM Narendra Modi have not worked and now it is “Kutti”(no talk till Pakistan stops terror) unlike UPA when President Musharraf came calling at Agra in 2005. Recent bugle was a strident call to vacate Pakistan Occupied Indian Kashmir (POIK) and Baluchistan, where China has major interests with CEPC and OBOR. And a new factor called the Trump-China –Taiwan factor, so USA’s policy with China holds many keys for India as India’s rise on the world stage is a given.

India has a resolute bull dozing popular leadership at the centre as the India Today poll shows, but that alone may not reduce but could only exacerbate its challenges to deal with the recalcitrant Pakistan –China combine. Pakistan relies on missile military support and money from China which is higher than the Himalayas and deeper than India’s Ocean as Hu Jin Tao said as Pakistan’s benefactor. China relies on Pakistan for its South Asia and Indian Ocean strategy to sustain its 1.3 bill population with aspirations. The results of the state polls are looming on the horizon with all guns being blazed by the state parties to take on the juggernaut of BJP and others.
Full scale wars seem like a relic of the past but skirmishes and unleashing of massive military power bordering on a nuclear umbrellas and losses of thousands of lives as Middle East wars has seen when US, Russian and European militaries came in to play with latest long range missiles, fighters and joint action. India has to be alert and ready.

Previous Post: MOD MEA PMO NSA AND POLITICIANS MUST ENSURE INDIA’S POWERFUL ARMED FORCES STRUCTURE AND MORALE IS NOT NEGLECTED BUT RENEWED
Next Post: NAVY’S AMBITIOUS TRI-SERVICE THEATRE LEVEL EX TROPEX-2017 BEGAN ON 24TH JAN POST COMMANDERS CONFERENCE WITH LETHAL PLATFORMS- WEAPONS AND ARMY POWER —IS IT A THUNDER CALL TO THE NEIGHBOURHOOD THAT AFTER NO 3 PPP ECONOMY INDIA’S MILITARY HAS ALSO ARRIVED ?