Pakistan’s ARY, has made a Telefilm on the Daphne submarine PNS Hangor’s kill on INS Khukri, and released it on Pakistan TV on 9th December as it was on that day in 1971 Hangor sank the ill fated Khukri off Diu, and Hangor escaped the hunt by Indian Naval ships and Sea King helicopters. It is in the book Warring Navies(ISBN 978-93-5158-638-0 and A Nation and its Navy At War(Lancers) by Cmde(retd) Ranjit B Rai.

Capt Mahendra Nath Mulla MVC went down with 17 officers and 176 sailors. It was the only success Pakistan Navy had in the war for Bangladesh. IDF notes flaws and exaggeration in the film but the Director accepts it is fiction based on the sinking of Khukri. It claims INS Kirpan the sister ship also was hit, but Kirpan evaded the first torpedo Hangor fired and left the scene Zigzagging as required for ASW protection to avoid the torpedoes at high speed, throwing its life buoys for survivors. Unfortunately Late Lt Jain on INS Khukri was testing his Sonar Enhancer at slow speed he had developed at Tata Institute of Fundamental Research(TIFR).

INS Kirpan under late Cdr RR Sood VRC later Rear Admiral returned to the scene the next morning to rescue officers and surviving sailors in life boats and some clinging onto life buoys in cold waters.

IDF has the full details of the Khukri story Retd Ranjit B Rai’s two books, and pastes page 185 how the Hangor ingeniously got away.

Adm A U Khan describes the painting of Hangor’s attack on Khukri which is displayed at the Maritime Museum in Karachi. Cdr Tasnem, is giving orders to the Ops Room Team, asking to classify targets in the early stages of the approach phase, and the team looks relaxed. On the left is the XO Khan himself, wearing handsets. The navigator is seen cross-checking target reports from the Sonar Operator, sitting next to the sonar console. Officer Lt F Bokhari, is working out target parameters – target course, speed and range on the self-illuminating tracing table. The Assistant Plotter with the divider in hand is assisting him. This captures the spirit of the Ops Room of the Hangor. After Hangor sank the Khukri on the night of 9th December, the Indian Navy hunted Hangor for 48 hours, and lobbed over hundred squids and depth charges, scaring Hangor as she was low on batteries and could not snorkel. Tasnim rigged Hangor for silence, switched off electrical equipment, creeping towards Karachi with oxygen candles and air scrubbers to revitalize the stale air. Movements of the crew were minimized to conserve oxygen. The Chief EA told Ex O Khan on his rounds, ”Sir, let’s go back home. I know these sasuras (referring to in-laws, but in this case Indians) intentions are not honourable.” Khan replied, ”Chief, we’ve sunk their ship, what do you expect … we sunk their ship!” Chief EA: “Yes Sir, but you are the EXO. Tell the Captain we have done our job, now stop playing this cat-and-mouse game with the sasuras and head home … otherwise all that money I have hidden will be lost – forever!”

As Pakistan MEDIA puts it produced by Abdullah Saija to transports viewers to 1971.”The epic trailer for telefilm 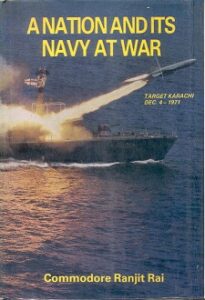 Hangor, a saga of unflinching bravery, was released quite fittingly on the golden anniversary of the day brave submariners of the Pakistan Navy aboard submarine Hangor successfully sunk an Indian navy warship INS Khukri and crippled down the 2nd warship INS Kirpan during the 1971 war,” (which is not true). “Ahmed Tasneem was the commanding officer of Hangor, the submarine. role played by Ahmed the Director of the film.

Ahmed recently posted the “men of Hangor” on his Instagram account. “It is a story completely based on true facts. Our submarine went into Indian waters and destroyed one warship, while damaging another. Despite their unbridled attacks, we returned to Karachi somehow and not only is the war hero still alive (Retired as VCNS PN) , the Hangor submarine is an actual submarine that is showcased in the naval museum today and this show is to celebrate the true story of our war hero.”

THE BRIEF AND THE POEM FROM PAGE 170 IN RANJIT B RAI’s BOOK.

A few weeks after the war, some fine sailors from the Khukri joined INS Nilgiri, India’s first Leander, as part of rehabilitation of the crew. The Captain of the Nilgiri Captain D.S. Paintal looked upon this act as a superstitious omen, but when assured that they were experienced shipwrecked sailors who could possibly be of help in educating the ship’s company of the new INS Nilgiri India’s first home built Leander, they were welcomed on board warmly like so many others of that ill-fated ship. Incidentally, in the Falklands war, a total of seven warships were sunk, but all their Captains were rescued and lived to tell their tale; once again showing off Admiral Nanda’s message to his fleet Captains as propitious not to go down Lord Mountbatten did when his destroyer sank in the med. One day, another Khukri will undoubtedly be commissioned so that we do not forget. (THIS HAS HAPPENED AND THERE IS MEMORIAL AT DIU AND ALL IN SHIPS SALUTE THE SITE OF SINKING WHEN THEY PASS IT)

THE KHUKRI IS NO MORE

I am Manu Sharma who served the Navy Settled now in USA,
Aged forty-two or thereabouts. I knew the Khukri which also symbolizes Gurkha strength,
And I was on her last voyage wherein served,
Mahendra Nath Mulla the Captain who smoked His last cigarette as he went down The old man to the sea,
Thambe Ommen the ship’s Engineer who tried his best But the Arabian Sea engulfed him,
Young Suresh Kundanmal that fine personality Who gave his life jacket to another, And lost his life without knowing it,
Joginder Suri who was the executive of the ship But saw his own execution for he could not swim,
Also down went those smiling 176 Indian Seadogs The others whose names I remember not But the Khukri I do,
They all lie some forty miles from Diu Undisturbed till they are picked up,
And only a wreck marks that special Dan buoy stave Till another Khukri rides India’s waves again.. 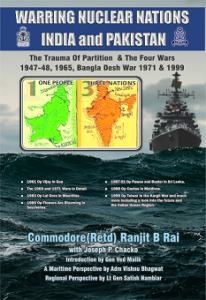 Tasneem read my book and phoned me up. He was coming to Delhi to go to the Ajmer Dargah. The Defence Adviser(DA) for Pakistan in Chanakyapuri called some serving Indian Navy and retired officers to a reception. Tasneem rang me up, “You must come I have to know why MY FIRST TORPEDO MISSED KIRPAN”……Only late Rear Admiral Paintal an ASW officer my ex Captain and I went. No other came, and we proved his first torpedo setting was wrong as Kirpan heard it go under and the proximity fuse did not activate. When DA asked what we would like to drink…..Tasneem said, “SALE WHISKY SODA IN KE LIYA AUR MERE LIYA COCA COLA ME DAL KE LAO”.