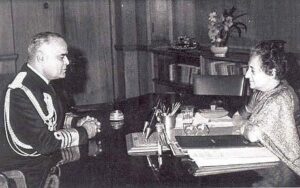 India is celebrating its 48th Navy Day on 4th Dec in a ‘No Contact Mode’ without the traditional ‘Burra Khanas’. Ships will dress overall with flags and illuminate, but will not be opened to public. so Navy has organized virtual visits. 4the December 1971, was the night the Navy’s three Osa class missile boats sank PNS Khaibar, PNS Muhafiz and MV Venus Challenger off Karachi with their P-15 Styx-Termit missiles. CNS Admiral Karambir Singh held a Media briefing on 1st December to explain plans and how Navy has remained in high tempo and combat-ready post the Galwan clash to ensure the maritime security of the nation, and is assisting the military in Ladakh. INS Jalashwa, Airavat, Shardul and Magar steamed 23,000 km and repatriated 3992 Indian citizens from Indian Ocean Countries(IOR). CNS said Navy is pursuing the Light Utility Helicopter building in the private sector and hence this IDF post is relevant.

On 3rd December, 1971 Lt(L) Promod Bhasin who trained on missiles in Vladivostok in the 1960s, tested the liquid fueled missiles at Porbunder before the Osas set off to attack Karachi, as per CNS Admiral SM Nanda’s war plans. Not one missile failed, earning Bhasin the youngest VSM. Later Bhasin spent over a decade and half with the classified indigenous Advanced Technology Vessel(ATV) project set up in 1983, a subterfuge for building nuclear submarines promoted by Dr Raja Ramana Chairman Department of Atomic Energy (DAE) and Dr V S Arunachalam Secretary Defence Research and Development Organisation(DRDO), with funding and support from the Prime Minister’s Office(PMO) and DAE. Bhasin in an interview explained how the Navy has followed Aatam Nirbhata(Self Reliance) since early days to acquire designs, absorb the nuances in building and then designed platforms locally

The Navy set up a Design Directorate and a Naval R&D set up called Weapons Electrical Engineering Systems Establishment(WEESE) in the 1960s it began with the building of eight 3,100 ton Leanders at Mazagon Docks Shipbuilders Ltd(MDSL), after acquiring the Leander design from Yarrow Shipyard of Glasgow and Vickers UK. The Navy’s constructor’s tweaked the designs to make broad beamed Leanders to the surprise of the Royal Navy when the First Sea Lord Admiral Sir Michael Pollock sailed on INS Nilgiri off Mumbai in 1973. India acquired FAC and Missile ships designs and established an indigenous shipbuilding ecosystem, which has contributed to the Navy’s successful nuclear submarine programme after the MDSL built INS Shishumar and Shalki submarines in the 1990s.

Admiral Sergie Gorshkov was impressed with the Indian Navy’s ingenious Termit attacks off Karachi in the 1971 war and agreed to train Indian nuclear submarine crews in the Bay of Ulysses and housed the families at Vtoraya a suburb of Vladivostok. PMO negotiated to lease K-43 a 5,000 ton Charlie class Soviet SSN and on 5th January, 1988 Capt RN Ganesh(later DG ATV) with an Indian crew commissioned K-43 as INS Chakra(S-71) despite US objections, thanks to PM Rajiv Gandhi’s intervention with President Gorbachov, and sailed from Vladivostok largely underwater. Rajiv Gandhi received Chakra off Vishakhapatnam on 2nd Feb 1988 and lunched underwater with the crew. 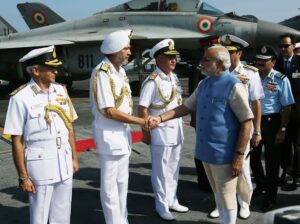 INS Chakra operated with few Soviet Navy safety crew in IOR waters till 1991, covering 133,000km with 430 reactor operation days, and fired five 63 km Amethyst missiles and forty two Cet/Test torpedoes. Chakra’s supervising Russian Captain A Terenov wrote, “The Indian Navy’s ATV nuclear submarine base at Vishakhapatnam and the crew are as good as any in Russia”, and paid tributes to the professionalism of the Navy’s submariners. Lt Cdr Prakash Patwardhan who operated the ‘Kluch’’ diving//surfacing system as KeDE3, saved Chakra from sinking by blowing main tanks after Chakra lost power due to a fire in the switch board. Chakra came up like a balloon and limped back to Vishakhapatnam and was repaired by Naval Dockyard with Soviet help.

The government advanced funds to India’s Bhabha Atomic Research Centre(BARC) at Mumbai to train Naval officers and design a miniature uranium reactor and construct a shore training half submarine(S1) with a shaft, gear box and a propeller at Kalpakam, South of Chennai at the Indira Gandhi Atomic Research Centre(IGARC). S1 was assembled by MDSL. Anil Anand a French trained reactor scientist and late Dr Sekhar Basu who went on to serve as the Chairman of the DAE, with naval officers commissioned the reactor(S1) on 22nd September 2006. The plans to build a nuclear submarine gathered steam.

The ATV steering committee selected and acquired the Dmitriyevich Spasskiy 6,500 ton 83mw single reactor design from Rubin Consultancy along with intellectual property rights(IPR) called Normatives(limits) to modify the design within parameters. The Navy with hindsight of the Leander experience and seeing the slow progress of designing the LCA and Arjun, pushed for the purchase of the S2 design and Russian consultancy for safety, so that the Navy could learn and tweak the designs in the future. Bhasin in his interview has stated an SSN design has been adapted by ATV, based on the original design. 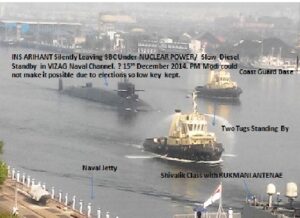 For construction of Arihant(S2), the Navy insisted on a public-private partnership model(PPP). The apex management board of the ATV impressed upon the Prime Minister that a PPP model, would enable participation of India’s private sector and MSMEs(micro, small and medium enterprises) and high-technology laboratories and civil entities to build sub assemblies to drawings and digital control systems and selected Larsen & Toubro Ltd(L&T) which had a heavy engineering facility and experience in building nuclear plants and small ships at Hazira. The Navy leased a dry dock and a covered jetty to L&T from the Navy’s sprawling Naval Dockyard at Vishakhapatnam. A Ship Building Centre(SBC) and workshops were set up with DRDO, to construct nuclear submarines with basing and support facilities and a nuclear safety training school on Soviet lines . A spanking new base Varsha is coming up South of Vishakhapatnam with nuclear reactor facilities.

Admiral PC Bhasin as then Director(Projects) ATV under Admiral B Bhushan cut the steel for Arihant on 5th January, 1999 at the SBC. Two more nuclear submarines S3 and S4 were sanctioned. The DRDO and the Navy set up a large Defence Material Development Establishment(DMDE) at Hyderabad with facilities to test critical items of machinery for the Arihant, and to ensure the suppliers followed special procedures during manufacture. Special wrapping and tagging, unfamiliar to most industries were introduced by ATV.

Russia provided critical parts to BARC for miniaturising the reactor with other industries and fit the nuclear reactor. The Arihant’s 83mw hybrid reactor was fired for criticality by BARC’s Dr Usha Paul, later decorated for designing the safe ‘shutdown of the reactor in emergency(SCRAM)’. The DRDO supplied the underwater vertical launched nuclear capable 750 km Kalam-15/Bhasin-05 missiles. INS Arihant was assembled in modular blocks with the integrated hull outfitting and painting (IHOP) X-ray technique by qualified welders, under Russian supervision, and was commissioned in November 2016 without any fanfare.

Nuclear submarine building is considered the epitome of naval ship construction. India joined the five other NPT navies’ club to build and operate nuclear submarines. In November 2018 Prime Minister Narendra Modi personally congratulated the crew at SBC on completion of INS Arihant’s successful deterrence patrol on both coasts, marking a new era for India’s nuclear deterrence capabilities, and the establishment of India’s nuclear triad to launch a nuclear offensive from land, air and underwater. But more, it was a successful Aatman Nirbhar project to show the way to India, as EX DG ATV Admiral Bhasin put it, and said rest of ATV is classified.

Cmde Retd Ranjit B Rai is an alumnus of the RN Staff College Greenwich which had a mini nuclear reactor called Jason, and was DNI and DNO in the Indian Navy.

Previous Post: NET CENTRICITY-& SDRs ARE WARFARE & INTELLIGENCE FORCE MULTIPLIRS —- INDIAN NAVY IS NOW NET CENTRIC WITH US NAVY FOR MDA 24X7 & WITH QUAD IN EXERCISE MALABAR
Next Post: IDF ANALYSIS OF ‘EPOCH TIMES’ EXPOSÉ DEPICTING COVID-19 WAS MORE ‘A NEGLIGENT HUMAN LEAK’ OF THE SYNTHETIC VIRUS FROM WUHAN’S P4 MILITARY LAB THAT CHINA DENIED TO GUARD CCP & XI IN POWER WITH CHINA’S SECRECY & INFORMATION WARFARE(IW) MACHINE & SUPPRESSED ALL –COVID WILL INFECT GENERATIONS IF IT IS A VIRULENT MAN MADE VIRUS AS ANTIDOTES & VACCINES WILL BE CAHLLENGING