India celebrated its 54th National Maritime Day on 5th April, commemorating the Day in 1919 when India’s first Indian owned Vessel SS Loyalty of the Scindia Steam Navigation Co Ltd sailed from Bombay to Southampton, and broke the British monopoly for India’s sea trade. Scindia’s was run like P&O the Gold Standard, and many joined Indian Navy in the Second World War but later Government owned Shipping Corporation (SCI) attracted many of its crew as it was a little more easy going, than a hard core shipping company and SCI took experienced Naval officers as Chief Officers. 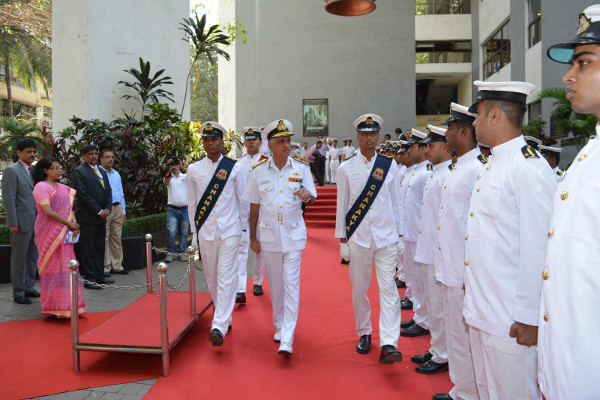 Mrs Sumati lived frugally and once in New York asked the Hotel for a taxi to go to the docks dressed in a saree, to visit one of her ships in port. She asked the taxi driver to wait at the jetty and after an hour the Taxi driver went up the ship’s gangway and asked the duty officer, “ Hey Buddy, will that old lady be able to pay the bill, she has to go back to the hotel ?” The Duty officer replied, “Do not worry, she owns this ship and many more”.
The story was reported in the New York papers and but National Maritime Day was first celebrated in 1964 more at Ports than Inland as the importance of the seas does not get understood in land , called Sea Blindness. Even today Gujrat is a leading maritime state of India as Gujratis understand the importance of economy from the seas and Veraval is a leading port for marine exports. PM Modi and Amit Shah are Gujratis !

Scindia’s did well for 50 years but after Shipping Corporation of India entered, competition was severe and Government cargo was restricted in favour to SCI and cargo from USA was in Conference with Waterman Shipping Corporation New Orleans USA with SCI. IDF was WSC’s India rep for 12 years till 2004 when WSC ships went to aid the Iraq war and WSC co-operated with SCI and Transchart for cargo. 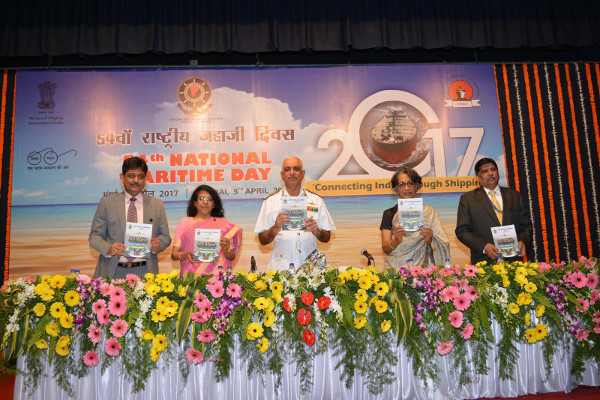 Indian Maritime Foundation (IMF) an NGO headquartered in Pune with Navy and Merchant Navy as members and branches all over and abroad celebrated the day and the message was sent out from IMF to its members, on this very important day !
“On behalf of the President Hony Cmde Rajan Vir Indian Maritime Foundation (IMF), its office bearers, members all addressed please accept our felicitations on India’s National Maritime Day”.

The day was celebrated with a function at the YB Chavan Auditorium, Nariman Point, Mumbai, hosted by the Directorate General of Shipping and the Shipping Corporation of India, and had participation from the merchant marine, shipping industry and maritime sector. Vice Admiral Girish Luthra, FOC-in-C, Western Naval Command was the Chief Guest, received by Dr Malini V Shankar, DG Shipping and Captain Anoop Sharma, CMD, Shipping Corporation of India Limited and Capt BB Sinha, Chairman, National Maritime Day Celebrations Committee. A Guard of Honour was presented to the C-in-C by the cadets of Indian Maritime University, Mumbai Campus.

During the function, awards for excellence were given by to selected shipping companies, seafarers and service providers, for their achievements. In his address the C-in-C highlighted the importance of the maritime domain in national, regional and global growth and development. He emphasised that the Indian Navy and the Indian merchant marine complement each other, for operations at sea. He brought out the emerging trends in the Indo-Pacific region, merchandise trade, export-import and the new focus on the maritime domain. He stated that the Indian Navy has adapted its strategy to the changing environment, in order to promote and strengthen security, stability and safety at sea.

IDF adds these are tough days for Bulker shipping with dip in volume of world trade but never has this sector and Indian Ocean been so important to India’s growth, development and security than it is now and we should endeavour to promote the importance of the maritime domain for India in shaping future policy as well as awareness at every level, particularly amongst India’s youth which will be increasingly reliant on this domain for their future well being and indeed sustenance. 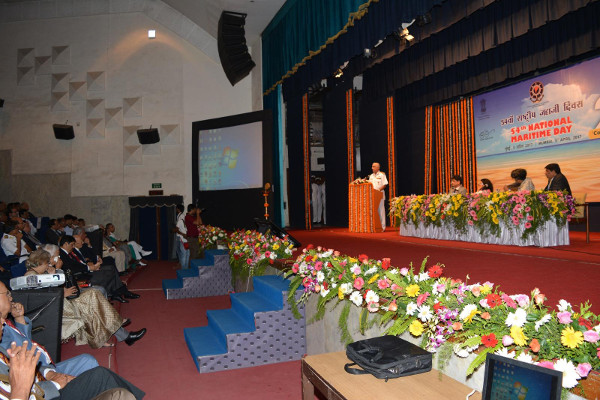 The U Tube on SAGARMALA PM Atal Behari Vajpayee’s dream for maritime India was announced by him on 15th Aug 2004 from Red Fort and it was crafted in Ministry of Shipping and PMO just a few days earlier, as PM Vajapyee wanted a ‘Dhamaka’ announcement of Rs 60,000 Cr in Maritime Infrastructure and IDF working closely with Transchart in Shipping Ministry and shipping company heads contributed with suggestions. It is linked below .

Sagarmala is PM Modi and Minister Nitin Gadkari’s Flagship Maritime thrust to increase Port Capacity, plan SEZs near the coast, increase industrial activity along the coast and improve connectivity and encourage a Blue economy. It is poised to develop six ports in maritime states. The programme is supported by PM’s acronym SAGAR (Security and Growth for All) and has links with India’s Act East policy which is PM Modi’s ambitious outward Foreign Policy dreams for India and why not IDF adds ?

It will surprise many that India only accounts for around 2 % of total global trade by sea. India has a merchant shipping fleet of around 576 ships and ranked around 14th in the world in terms of around dead weight 12 million tonnage under its flag, and some Indian ships are flagged abroad for tax benefits but are controlled from India with Internet and 24×7 contact with the Fleet and owners. But the overall share of Indian ships in the carriage of the country’s overseas seaborne trade has been declining over the years and over 50% of the carriage is on foreign bottoms when 90 % of the country’s total trade by volume and 70 % by value is done by ships. 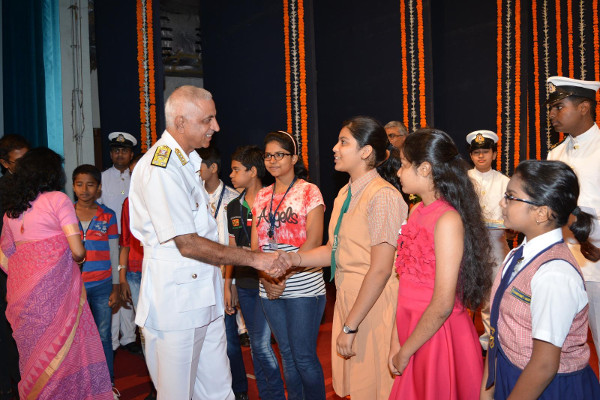 Shipping is capital intensive, crews have to be paid high wages and makes it difficult for Indian shipping to employ foreign talent. The trend of low carrying capacity can be largely attributed to the greater tax advantages available to a majority of foreign players vis-à-vis Indian flag vessels, particularly with respect to the current treatment of service tax on voyages and time charters, which make Indian shipping more expensive. This restrictive regime has resulted in an uneven playing field for national shipping lines in the country, resulting in stagnation of capacities and increased reliance on foreign flag vessels. Merchant shipbuilding needs subsidies as in China and initially in USA by MARAD, Japan and Korea.
Out of India’s fleet, 70 per cent of the vessels with only 10 per cent of the total gross tonnage are devoted to coastal operations, while the remaining 30 per cent with 90 per cent of gross tonnage are deployed for overseas trade. While 53 per cent of Indian tonnage is in the oil tanker category, 32 per cent was accounted for by dry cargo bulk carriers and 11 per cent by dry cargo liners, with offshore supply vessels making up the rest. Cabotage law restricts foreigners to invest in Coastal shipping which is cheaper than road or rail, clogged in India. But as India grows so will India’s Mercantile Fleet and coastal shipping will be inescapbale………Shan No Varuna.

The women are the first since October 2015, when Army Reserve Maj. Lisa Jaster became the third woman to earn the coveted Ranger Tab.

The women were two of 10 to graduate from the first integrated IBOLC course back in October, bringing the total number of Ranger-qualified women to five.

Following basic officer graduation, prospective infantry platoon leaders spend the next year at a series of schools and training, from Ranger and Airborne schools to the Stryker Leader Course and the Mechanized Leader Course.

Once they’re ready for assignment, the women will be sent to Fort Bragg, North Carolina, or Fort Hood, Texas, where the Army is fielding its first gender-integrated infantry platoons.

Also in that pipeline are Capts. Kristen Griest and Shaye Haver, the first two women to finish Ranger school, in August 2015.

Previous Post: INDIA-RUSSIA BHAI BHAI COOLING ?? – WITH AFGHANISTAN GWADAR & CPEC IN VIEW RUSSIA WARMS TO PAKISTAN WITH MILITARY& NAVAL EXERCISES & A HIGH LEVEL MILITARY VISIT TO WAZIRISTAN- BUT THE NEW KID ON THE BLOCK IS A PRESIDENT IN USA NAMED TRUMP ! WILL HE TRUMP INDIA (HIBI) OR WILL INDIA TRUMP HIM ?
Next Post: OPEN SPYING ACCUSATIONS & RHETORIC ON INNOCENT EX CDR JADHAV’S FATE IN RAWALPINDI GETS LINKED WITH DISAPPEARNCE OF EX PAK COL ZAHIR IN NEPAL – & MEA RULES OUT SWAP ?