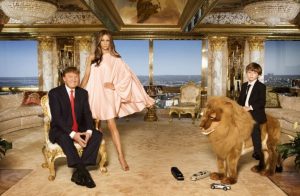 IDF post  includes snippets  about American history and India to appreciate   how both progressed to ask will Strategic  Autonomy succeed with China as the Elephant in the room.

USA and India today stand in a world moving away from multilateralism  to bilateralism in  trade and foreign policy led by USA. Two security blocks are forming with USA, Japan  and a  poorer NATO on one side and a rich China and Russia and Pakistan and nuclear North Korea on the other with a  Trade war of sanctions and tariffs let loose by President Trump, for India too.

President  Trump wants to trump China and Russia,  by damaging their  economy  but China’s capability to do business and manufacturing has matured and the $ 13 trill  economy will creep and  grow to challenge USA’s $ 20 trill. World growth will suffer as USA turns in ward to grow it’s own economy and will soon come to terms with China and EU as he heads to Russia on 16th July to make a deal with Putin. He knows EU depends on sanctioned Russian oil and gas with increased prices, and Russia’s military power  is rising. The FIFA cup showed it is capable !  IDF does not believe in PPP in a globalised world. 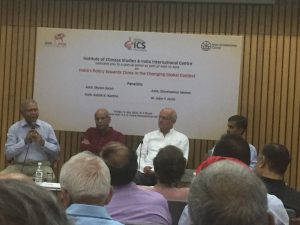 A national strategy is one where military, political and bureaucracy’s leadership understands it,  and act in Sync. Unfortunately in India the political-bureaucracy combine and  the  Military have not been one,  so a Defence Policy Committee (DPC) has been formed under a powerful NSA who has wide powers and two meetings have taken place with IDS Secretariat  but Home Ministry is not in it. A strategy of  Jugad, to fight fires that is  India’s forte, could emerge in a hurry,  as elections are near considering PM could not get 17 Military Commands to consolidate or make a CDS ! Or will DPC beef up the military only ?

USA has a business strategy under President Trump to make USA great and in his game plan India is a cog  as a strategic ally, that USA calls a Strategic  Defence Partner, as it offers investments,  CISMOA and BECA under new names to please Indian sentiments and wants to pry open  investments but India is in election fever and wants to run with the Hare(China) and hunt with the Hound(USA).

PM Modi is a one man sharp, charming, clever Deal Maker to attempt Strategic Autonomy and not a strategist so to deal with  China, Russia and USA,   Diplomats and military  know there is no diplomacy in real politik.  This is an Indian  dichotomy that had confused USA and challenged Indian Strategic experts in Non Alignment days’

Today  Russia and China watch and push  their own interests and with a creep China has taken on India with Pakistan in what IDF calls CHINA’s CREEPING STRATEGY TO GRAB AREAS AND BASES FOR INFLUENCE LIKE USA DID IN THE COLD WAR WITH DEEP POCKETS AND ONE DAY THAT  INFRASTRUCTURE WILL PAY OFF ! It takes time but the strategy worries USA. 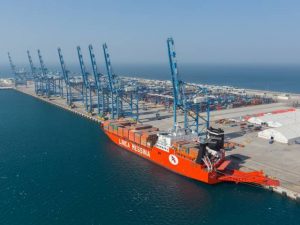 China crept into Shasksgam valley of POK in 1963, South China Seas from 2005 to consolidate today,  IOR with Gwadar and soon Ormara and Maldives and Hambantota since 2007,  POK with CPEC from 2012  and Djibouti since 2015 with a new jetty as  India’s maritime assets are in  decline. Now China has crept into Bhutan’s Doklam as it looks long term.  India turned to USA from 2014 with force under PM Modi and this has worried Russia. Why has all this happened ? History holds the answer.

America  was discovered  by Columbus in 1492 when Portuguese discovered India, then under Muslim  rule. The  Portuguese handed over to the  British to rule for 250 years and India got Independence through Non Violence so with it in view, Non Alignment became our two word Foreign Policy.  India became poor. Soviets saved India since  1971 but collapsed in 1990.

USA on the other hand used force to become Independent. Columbus  discovered America in 1492 and Spain controlled much of the South of America and were defeated by Americans and  the  Native Red Indians were savagely subdued in America and even today live in Independent reservations as they amalgamate into society. Some thing like our Adivasis and conditions in North East.

The British landed in Virginia in 1607 and  colonized it. In 1775, in a war the colonists were defeated and on 4th July 1776, rebel leaders declared Independence and signed a brief Constitution in  1787. Gen  George Washington became its first President and thirty out of forty who served  in the military have  become Presidents

Later as USA expanded and industrialized,  the rich Southerners with slaves from Africa in plantations started a new Confederate nation in  1861. This  led to a long North South civil war  over slavery too. In those times India was under firm   British rule and the 1857 Mutiny was suppressed as Indians were divided,  a religious and caste trait in Indians called the Mir Kasim/ Mir Jafar trait evident in daily politicians of India today, who switch sides.

Cousins and brothers fought each other in America and on Nov. 19, 1863, President Abraham Lincoln delivered his  brief Gettysburg Address at the dedication of the joint Soldiers’ National Cemetery in Pennsylvania by defeating the South to unify the nation and that makes USA  great. He  forgave the Southern Army of Gen Lee  and USA became a cauldron of all races but all salute the Flag of Unity of states and Cross their heart and sing the Star Spangled  banner composed by Keys on the ship Minden built in Mumbai by the Wadias.

By 1910s Americans became very rich developed one of the largest economies in the world, with a gold rush to the West and Theodore Roosevelt articulated and  used Mahan’s Maritime Theory to become a power.

FD Roosevelt braved a depression in the 1930s, fought two world wars safely as it is isolated and gave Social Security to all, and Medicare for the rich with payment and  free Medicaid to the poor  and passed the First Amendment of Democracy and supported the  short US Constitution  which  can be carried in one’s pocket. Supreme Court takes very few cases on national importance not like India where a road divider case in GK 2 went to waste Supreme Court time and BJP wants to control. 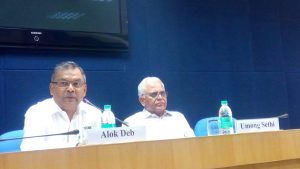 In India Porus was defeated by Alexander,  the Marathas were beaten in the 3rd War of Panipat, and 1857 Mutiny did not succeed and the Indian Army was defeated by China in 1962, with poor leadership and  the mistakes are to be corrected by the DPC.

India  fought  for Independence through Non Violence, never let capitalism spread and became a poor nation. Today under a dynamic hard working Prime Minister Modi Realpolitk is being  adopted with America to rise but there are hurdles.

This post must include two quotes. First one is by Henry Kissinger, “India and USA will have  relations like a married couple, who can neither divorce nor get along.”  IDF adds, that both will  have  to bed each other  from time to time and Condeleeza Rice promised to make India a power but all we wanted was a unconsummated Nuclear Deal.

For this marriage to succeed  India will have to become a strategic partner of USA because President Trump is a business man who believes in partnerships. He  has trumped up USA’s economy to double China’s and wants to do that for India and  USA and India need each other because  the Elephant in the room is China, whose leader XI Jinping with Pakistan may spoil the party for both, but Russia can be India’s Achilles heel if Trump forces India to decide to sanction Russia. This is the million dollar question after India has acquiesced to do less business with Iran.

The other quote is from Madeline Albright’s book  which has an  assertion that the US is the world’s only “indispensable nation”  which  cannot be forgotten. Justifying US coercive diplomacy Albright said: “If we have to use force, it is because we are America; we are the indispensable nation”. She reveled in using the term as did Presidents Bush, Barack Obama and Trump when he threatened North Korea  and Russia in Syria. India has to weigh the two quotes for Strategic Autonomy and PM Modi has to Trump  trump. Shan Na Varuna.

Previous Post: RICH & STABLE UAE HAS STEALTHILY BECOME A WESTERN IOR MARITIME POWER GOADED BY FRANCE & SAUDI ARABIA—WEST ASIA HAS BECOME UNSTABLE—IT IS INDIA’S OIL LIFE LINE — WAR THERE WILL HIT INDIA & IS TRUMP CAUSING IT ? IS CHINA A PLAYER THAT INDIA NEEDS ? Part One.
Next Post: USA- PART 2—POT POURI ABOUT TRUMP & INDIA & PM MODI — AMERICANS ADMIT INDIANS ARE THE MOST INTELLIGENT/ HARDWORKING & CLEVER (CHATUR) INFLUENTIAL GROUP IN USA ! BUT WILL THAT HELP STRATEGIC AUTONOMY FOR INDIA ? SO INDIA WAITS FOR 2 PLUS 2 ?