Admiral RK Dhowan demits office on 31st May after an exciting and successful tenure with team work, and with his Vice Chief Vadm P Murugesan. Both demit office the same day. IDF wishes both and their families the best in times ahead.PM Modi should give them a fitting farewell as Navy has shown the way for his Flagship MAKE IN INDIA programme and the sign posts for its achievement, though the DPP for activity to begin is elusive, as RM Pannikar has spent most weekends when work is executed , in Goa, he enjoys best. Good for Goa. 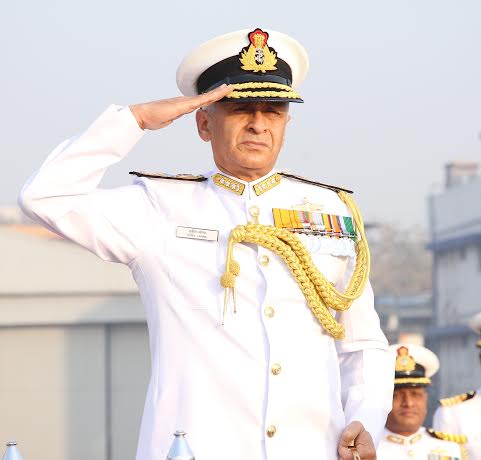 DCNS has offered a 100% investment company in India which looks juicy. Others will follow. Groups are looking in to the Strategic Partner issue. Good luck to them after Kelkar, Naresh Chandra, Dhirnendra Singh and Atre reports which have nuggets for private industry to join and India to boom. 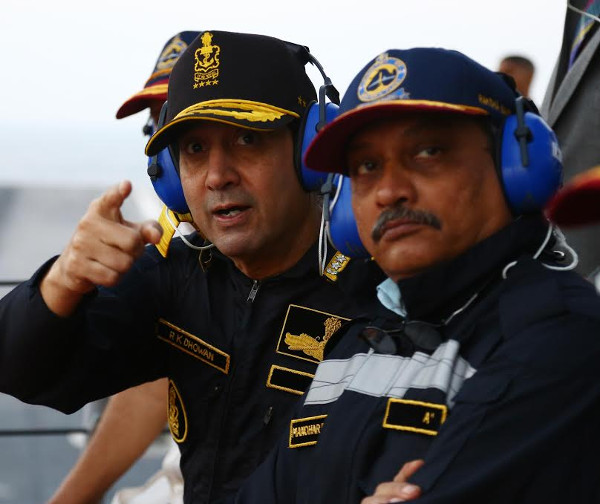 Dhowan’s message to the Navy in his farewell Indigenization plan 2016-2030, a small part quoted below is clear. He has set the bar for what an operational Navy is expected to achieve and safety standards. India’s Navy achieved much after a series of accidents and low morale created more by media criticism. PM Modi took it well. Dhowan had taken over in April 2014 by happenstance and IDF predicts he will go far for his abilities for security he has honed in his term as CNS, called ‘The Big White Chief’ in Room No 191 in South Block in Lutyens Delhi.

Dhowan’s message is , “Commitment to self-reliance through indigenous development, is a subject of the larger goal of combat readiness. Therefore, till indigenous equipment are available, Indian Navy has wowed to continue with the acquisition programme to meet the Nation’s specific and current operational requirements so as to constantly remain battle worthy. Simultaneously, for the short-term requirements, we have to depend on the current indigenous efforts, and use the available technologies and effect marginal improvements wherever available”

Submarines are the most difficult to make and nuclear submarines the epitome of ship building as each fitting in the pressure hull, pump, pipe and reactor etc in the 6000 tons is tested to lifelong ability with zero tolerances and lots of stainless steel goes into the piping, composites and titanium in the heat exchangers most items including batteries monitoring systems, pressure cylinders, pumps etc have been supplied by some 120 Indian companies. Safety checks and destruction tests are a must, done at DMDE Hyderabad and Dhowan having been ADNP, DDNP, ACNS(P&P) and VCNS who do planning and funding and get government sanctions, knew it all. That was his forte, hard work and oratory !

CNS Dhowan was keen to show case home built nuclear submarine Arihant to the world at the International Fleet Review (IFR) at Vishakapatnam earlier this year as the ATV people are unsung heroes especially their DGs. They built the submarine in a PPP with Larsen&Toubro Ltd and IDF confirms Arihant is more than 60% Made In India but her appearance at IFR did not happen at the last minute. NSA controls strategic assets and knows best.

Arihant’s Submarine design came from Rubin and designer associates and reactor design for BARC from Afrikantov Russia and parts from many Russian and foreign suppliers put together with an Indian steam turbine from BHEL and so many Indian suppliers who freely displayed at DEFEXPO at Goa and Vishakapatnam in DGNP(V)’s Golden Jubilee Celebrations, which was eye opening. The accommodation they say is better than Russian nukes and is by NIDD Ahmedabad. IDF will put up the list available in the Public Domain but MOD/DRDO should now clear it to tell the nation is IDF’s recommendation. It will be accurate. The story needs telling.

Project ATV/ Akakshanka has aimed to ensure the future nuclear boats are more than 75% Indian and DMDE in Hyderabad is the hub for testing and working over time, helping Indian Industry. The Navy Chief was not allowed to display Arihant which had even completed sea and diving trials and is awaiting commissioning with nuclear tipped Kalam-15/Bhasin-05 missiles but the debate who will Command and Control the nuclear boat that IDF had raised, is possibly not decided. The experience of INS Chakra operating under Navy must not be missed.

The Navy top brass was on tender hooks and only three days before and on a week end 28TH May the nation and Navy was told Vadm Karmbir Singh will be VCNS to Admiral Sunil Lanba who is set to take charge as the Chief of Naval Staff on 31st, Lanba recently accompanied RM Pannikar to the Gulf and must have made an impression. Lanba has done every critical job and is an RCDS London product.

Criticizing the current Government is not kosher as it is authoritative, so IDF will be careful as this IDF analysis would not be complete if it did not touch the two years it has been in power and is instigated by the grand celebration called NEW DAY by the BJP NDA Government’s extravaganza on Sunday 28TH night on DD TV shown by all channels. It was a bit of a long over kill.

This BJP NDA leaders supported by RSS and its affiliates form part of a lucky Government with a visionary leader PM Modi and has done well. But two honest years have made them full of hubris is a general feeling of the Armed Forces both among the retired and serving who are not allowed to express their feelings and will always toe the line. In the Navy its termed, ‘Keep Your Yard Arm Clear’, the Air Force believe in , ‘Don’t Take Panga’ and in the Army, “Speak only when spoken to’.

Media reported a Lt Gen a GOC-in-C who commanded Delhi area was transferred because he spoke up. The OROP example is a well known issue when the Chiefs consciously did not take up the issue with vigour, but got solved with pain. If India’s speaker can drive a latest Jaguar driven by the very rich, MPs live in style, then Armed Forces and those who demonstrated at Jantar Mantar deserve better. IDF congratulates PM Modi who has conceived great ideas and will deliver if Government mellows. Modi’s speech at India Gate showed those signs but some in English for the Southerners may have helped.

The Navy band played the Navy signature tune ‘Jai Jai Bharati’ at India Gate and the show fell short on National security issues ! This Government is honest led by PM Modi and assisted by Amit Shah to deal with political machinations as Chankaya suggested in edicts quoted below.
1. “Learn from the mistakes of others… you can’t live long enough to make them all yourselves!!”
2. “A person should not be too honest. Straight trees are cut first and Honest people are screwed first.”
3. “Even if a snake is not poisonous, it should pretend to be venomous.”
4. “Once you start working on something, don’t be afraid of failure and don’t abandon it. People who work sincerely are the happiest.” 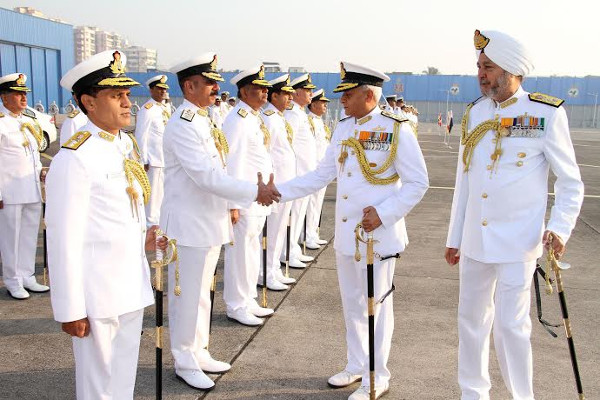 This Government is happy, and has luck and any Governance after the UPA’s years of corruption and laziness will be a better Government. BJP government has controlled high level corruption and saved billions. It has taxed heavily. Lucky for them the price of oil has dropped, The world has moved to a consumption economy and with 1.3 bill India’s consumption economy cannot be now stopped. FDI will run in if …..

China, USA’s Trump, EU are all touting for a consumption led economy. This government is lucky.

On defence the DPP could not be given birth, black listing screwed the Navy’s need for Multi Role helicopters and Chetak replacements with single vendor bids and bench marking of price is controlled by the Minister of Finance and it compares Russian prices. Army could not get Pinakas as IMI was blacklisted and IDF hears Finmeccanica’s 40L long range radar may have arrived for Vikrant. AW-101 investigation is on, and lets hope it goes better than Bofors, HDW, War Room leak. IDF predicted Italian Marines case and the second marine prepares to leave. Army waits for a light 155mm guns and moderisation with better rifles etc and IAF the Rafales or Grippens and list can go on. Navy has convinced IAF to take Tejas MK 2 and the GE -414 can wait.

IDF is reminded of what Admiral Karmakar told his two in coming and out going Flag Lts and staff in 1964 when Lord Mountbatten was coming, “ Always Remember conceiving is easy and romantic but delivery is painful with labour so get going on delivery “ . PM Modi has conceived well and much, but now is the time for delivery. He knows it. Shan No Varuna.

Previous Post: AFTER US LIFTED SANCTIONS PM MODI HAS MADE STRATEGIC MOVES AND A US –INDIA- IRAN NOOSE SEEMS TO BE TIGHTENING AROUND PAKISTAN
Next Post: ITLOS RULES AND SAME SUPREME COURT RELEASES GUARD GIRONE ON MURDER CHARGE BE SENT TO ITALIAN CUSTODY- TO JOIN LATTORE -CASE GOING AGAINST INDIA ?