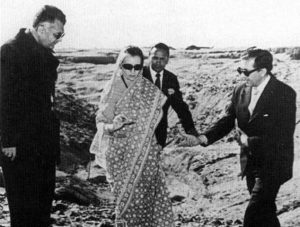 This is a 1400 worded  IDF Part One Analysis of India’s Nuclear Bombs  with a personal snippet and trailer of Movie Parmanu  as two nuclear tests  24 years apart changed India’s destiny. Why not earlier after 1974 is analysed in Part Two.

Five  PMs deserve BZs.   Shakti  did not happen in  a day.  PM  Nehru for supporting Dr Homi Bhabha to keep at it, Mrs Gandhi for 1974 PNE tests and Rajiv Gandhi and Narasimha Rao giving fillip and funds and Gen K Sundarji and Arunachalam for pushing. And many more !

Late K Subrahmanyam approached  former PM Vajpayee and asked him to relate details  of the   run up to Shakti,  as much was not on file and possibly verbal.  Vajpayee told Doyen Strategist ‘Bomb Baba’ KS,   he had told  PM Dr Manmohan Singh all.  IDF feels Data is vanishing as actors age !

Most Cabinet Ministers and even Service Chiefs were not aware though Army  Engineers secretly transported six cores to Pokhran  from BARC Mumbai and brought back one unused plutonium core and built the  L shaped tunnels and trigger wires for the core in 1974 and  for 1988 tests  stronger cement was used for tunnels like for naval jetties,  and varied and deeper 221 mtrs and more L shaped.   Today DRDO has a large complex at Pokhran and a fine 12 Guards Regiment near by !

Oldies in Khetalai village near Pokhran told IDF  all about  1974 and 1988. Onions were put in the tunnel IN 1974 to avoid radiation and they were moved out with compensation and  many claimed illnesses, but not in 1988 when moved out.  Brajesh Misra is credited as he sipped with PM Vajpayee and Kingshuk Nag’s book is a read.  IDF saw PM Vajpayee’s sharpness  at  a McKinsey presentation on  Infrastructure,  when he told the audience, “Yeh to hame pata tha….Batao Bharat me kaise karenge”. We know all this tell me how to do it in India.

The  trailer of Parmanu and  another sums up the tests of  11th June 1988 with footage  of Shakti. 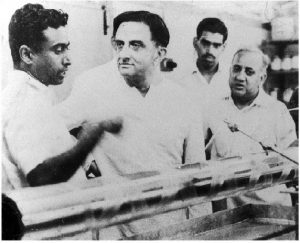 Lt Col (TY) K Santhaman  Adviser DRDO (Ex BARC/ RAW) is seen in Army uniform  recalled the preparations and the bangs and the less publicised role of DRDO and TBRL Chandigarh as  BARC took the credit. It was teamwork. Others on site were Late Col (TY) Dr APJ Kalam DRDO head and Brig (TY) Dr Chidamaram DAE head  and Dr Kakodkar and Dr Sikka who did the calculations and is less known, like Dr S Basu for ATV.  They  conducted the tests very secretly at Khetolia village near Pokhran, working at nights with Army and vehicles to avoid satellites and used cloud cover. CIA was outwitted as Kalam reported success  and  PM Vajpayee wrote to President Clinton and bravely faced the sanctions. India  became a Nuclear power and Pakistan followed with Chagai-I  five simultaneous  on 28th May 1998. The sub continent became  volatile. Iran may follow.

Ambassadors Jayant Prasad and Sheel Sharma  on the panel related   the diplomatic activities and  Bharat Karnad gave a critical view and raised many many questions to MEA and all  why 1974 did not follow up with a bomb, the efficacy of the Thermo Nuclear Fusion devices and testing and CTBT which precludes any more tests.  Santhanam and Dr Iyengar had  also raised this controversy earlier.  IDF learnt it was planned and less Tritium was employed for the Hydrogen explosion.

Another issue that confused the audience was Credible Nuclear Deterrent (CND) or Nuclear Credible Deterrent (NCD).  IDF feels CND allows Government to decide number of cores while  for NCD the military has a say discussed in Part Two. Chinese says they have learnt from India.

The event was  timely but left IDF personally  unconsummated. The true history, costs, and decisions should be  recorded in classified and unclassified form like DRDO and Navy have done for the ATV Project with  the Rise of Nuclear India on the world stage as Military is not kept in the loop except  SFC under NSA for delivery.

Media reported latest Agni ICBMs  have been handed over to SFC and IDF studies  Command and Control which has holes. The  Defence Planning Committee (DPC) may now clear these as NSA is the head.  Navy will soon have delivery and mated weapons  on nuclear boats  and will need Code Security for safety like the  Football code in USA.

As India rises Future Indian Researchers will look to our Nuclear Military  history. We have little sense of history with our divisive politics on security when all parties should be one.

So this has to be personal,  to appreciate  how the world viewed 1974.

On 19th May 1974 at 0830 GMT in London’s  Catford borough where Blacks and Indians lived a bright  Cdr Ghafoor,  a relation of the Shah of Iran driving down from Blackheath picked up IDF  from the bus stop as he invariably did,  if he saw  a Lt Cdr in Uniform waiting for a bus with school children. He drove to Royal Naval Staff College in his Humber. He gave IDF the London Times and  said. “You bloody Indian buggers have exploded the bloody nuclear bomb…..read the story. You keep saying India is a a non nuclear weapon nation  !” IDF  read the piece twice and Ghafoor asked, “Did you know ?”

Of course not,  I pleaded I had no idea of the Peaceful Nuclear Explosion (PNE), but have  learnt a lot about Nuclear matters through  NATO vs WARSAW exercises and  lectures and seeing Jason mini reactor  operations. There is  nothing like a PNE. “It’s a bomb test I think. Great”.

Ghafoor loved pulling the Whites’ legs.  IDF  was known as Peter Sellers for changing  accents from South Indian being married to one to Cockney Brit or American . So he said, “Peter, look  surprised and  when those whites  ask you. Petend and say,  ‘Oh it’s happened’‘ and tell them what you have read in London Times”. Need IDF  write more as that is what IDF  did and in the next two hours  a team from Whitehall possibly Intelligence,  was down to Greenwich. 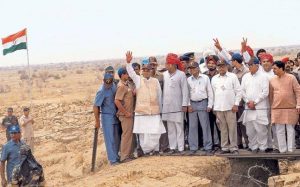 IDF  was marched up to the Deputy Director’s office and grilled ! IDF  confessed it was a prank  and asked  to ring Rear Admiral RKS Ghandhi Ex Flag Lt to Mountbatten and well known in RN as India’s Naval  Attaché at Aldywch, who laughed at IDF’s  worried voice and said don’t worry both of you come over for dinner on Friday,  “I have invited Frank Judd Deputy Defence Secretary who represents Scotland and Natwar Singh  and come prepared to tell them what you did and don’t worry RN  will  not send you back or affect your report.”.

That was  Buddha Smiling but  IDF  was barred from the rest of the visits to the Jason Mini Nuclear Training Reactor.  Luckily the restricted visit to NATO base, and a ride in a Nimrod looking for Soviet submarines over the Atlantic with pretty NATO operators and coffee and sandwiches  was over and it was coming to the end  of the Staff course ! I was on 4 Pounds a day and paid 2 per week for one room to the Indian Brick Layer and his Post woman wife a week, who were kindest people to us.

My wife ate Baked Beans with onions and chillies for lunch and my name did  not come in  the list for Acting Cdrs like my term mates. I thought I had missed the bus but was told on return it was because if they promoted me, the  High Commissioner BK Nehru (my wife got to know) will object  but I was devastated for six weeks  then,  and was thinking of buying a farm or ask my UK colleagues for  a job. They looked at me sadly as a ‘Passed Over ’ but in  a great farewell dubbed me as the officer who  knows India’s nuclear policy !

Like on above  lines,  the government kept  SHAKTI   low.   PM was busy for  Karnataka elections  “to win  or die”, and  the Architect PM Vajpayee is bedridden so no new details of the   five nuclear tests conducted at Pokhran on 11 and 13 May 1998 came out but India had openly  crossed the Rubicon by declaring itself a nuclear weapon state. IDF  did get  promoted in 1974 and got Director Operations and Intelligence posts and a Diplomatic tenure possibly thanks to Buddha  Smiling report. Part  Two will have Nuclear and ATV’s  serious snippets. Shan Na Varuna !