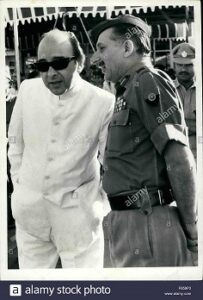 Adm Nanda had got Mrs Gandhi’s clearance to strike Pakistan Navy at Karachi. Fortunately no orders were given to Navy to go defensive. On 4th Dec night Navy’s three OSA missile boats in Op Trident struck PNS Khyber, Muhafiz and MV Venus Challenger but for 10 years, claimed attacking Karachi’s Kemari tanks unaware the missile hit Karachi beach and that OCU Wing Cdr Don Conquest (Vrc for Longewala not Kemari) in 4 Hunters from Jamnagar had by luck and happenstance, attacked Kemari Shell oil tanks on fire on 4th December morning. Hunters had to fuel and rush from Jamnagar to Jaiselmer to help Army at Longewala. IDF corrected Navy’s History after a decade with search for the truth, and gave credit to IAF with details in the book ‘Warring Navies-India and Pakistan’, ISBN 978-93-5156-638-0.

On 8th December Osa INS Vinash(Lt Cdr Jerath Vrc) in Op Python struck the Kemari tanks with its first P-15 missile and damaged the tanker PNS Dacca and sunk MV Harmattan. IDF must mention Adm Nanda in a COSC meeting had asked ACM Lal for a strike on first light if war came. IAF Chief said it was not possible as IAF looked to first neutralise Drig Road Radar which is in Lal’s autobiography, that his wife and Air Cmde Badhwar completed. Manekshaw said to Lal in Punjabi, “ Chota Brah Ek Strike Mang Raha Hai…..De De”. OC Jamnagar Air Cmde Pete Wilson knew Navy had asked for a strike on Karachi. So Conquest Hunters struck Kemari with ‘One Blind Eye’, that Nelson coined.

Official records are not released and IDF relies on research with Prasun Sengupta(Trishul Trident BlogSpot) and Gen KP Candeth’s book, The Western front, & Battleground Chhamb( 2018) by Maj Gen AJS Sandhu. Extracts below, will prove IDF’s analysis why the Army’s actions remained defensive on the Western Front.

Gen Candeth in his book on the Western Front writes how around 2nd November at Jammu, Manekshaw approved

THIS IS VERBATIM.Then on 30 November the Chief of Army Staff accompanied by Sri DP Dhar came to see me and issued fresh directions that Western Command would not be allowed to go on the offensive until sanction to do so was given by Army Headquarters. This placed the Western Command in a grossly disadvantageous position. The trouble was that while I was of the view that the offensive action was the only way to relieve pressure on other fronts, Army Headquarters wanted Western Command to remain on the defensive but without losing ground. I was certain that we would lose ground unless we attacked and wrested the initiative from the enemy. However I had not given up hope of launching the offensive once the war started and so warned Officer Commanding 1 Corps Lt Gen KK Singh to be ready to take the offensive at short notice. Pakistan’s forward defence like ours, were based on the best line of posts with mines held by paramilitary forces, the more important posts being reinforced by small contingents of the regular army. UNQUOTE.

When Akhnur was in danger from Chhamb Attack Corp moved. IDF feels dual command of BSF on borders, and ITBP with Tibet and China and SSB with Nepal under Home Ministry will haunt Army’s Command and Control like a nightmare in any action, and Intelligence will be dissipated. Navy luckily takes control of Coast Guard in need as it is under MOD.

HOW IN BATTLEGROUND CHHAMB MAJ GEN AJS SUNDHU PUTS IT

QUOTE.“The Battle of Chhamb is considered to be the fiercest, bloodiest, most intense and decisive battle of the 1971 Indo-Pakistan War. Prime Minister Indira Gandhi termed it as ‘the toughest’. Pakistan had amassed a very large and formidable force under 23 Infantry Division for their offensive; it comprised five infantry brigades, one armoured brigade and 31 artillery batteries. In fact the artillery employed by Pakistan in the Chhamb sector was more than they had to defend themselves in East Pakistan (now Bangladesh). Having tasted success in this sector in the 1965 Indo-Pakistan War, this time, with a much larger force, Pakistan hoped to capture the strategically important town of Akhnur. On the other hand, the Indian 10 Infantry Division’s task was changed as many as four times in the run up to the war – from a purely Covering Troops action between the Cease Fire Line (CFL) and the permanent defences well to the rear, to an offensive task, then into a ‘Forward Poise’ and finally to adopt a defensive posture on 1 December 1971. This final change of plan, literally at the eleventh hour, had a profound bearing on the conduct of the battle. Notwithstanding this, 10 Infantry Division fought magnificently and managed to hold the Pakistanis on the line of the Manawar Tawi River. Just as it was preparing to launch major counter-attacks, the sudden declaration of the unilateral ceasefire by India, robbed the division of an opportunity to recapture lost territory. The Battle holds many lessons for India even today and should be required reading not only for members of the defence forces, but for anybody who is interested in South Asian history”. UNQUOTE. 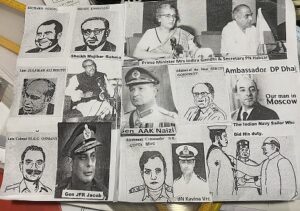 In 1971 Nixon threatened, “If India pokes its nose in Pakistan, US will not keep its trap shut. India will be taught a lesson.” Sitting with the US President Richard Nixon in the White House, while maintaining an eye-to-eye contact, Mrs Gandhi said, “India regards America as a friend. Not a boss. India is capable of writing its own destiny. We know and are aware how to deal with each one according to circumstances.”

Chamcha, Kissinger, while ushering Indira Gandhi into her car, commented, “Madam Prime Minister, don’t you feel you could have been a little more patient with the President?” Indira Gandhi replied, “Thank you, Mr Secretary, for your valuable suggestion. Being a developing country, we have our backbones straight & enough will and resources to fight all atrocities. We shall prove that days are gone when a power can rule and often control any nation from thousands of miles away.” That lesson holds good even today with PM Modi.

In 1971 there was combined pressure from Soviet Union and President Nixon to see India does not try to break Pakistan as it was militarily complicated, and there were vested interests. Soviet Union supported a plan for Bangladesh, and after the war began, USA had no choice. In botched Op Parkaram 2001-2002 Indian armed forces were mobilised for war but under US pressure, the No 2 Attack Corps which had moved to cross the border was called back and IDF recalls Corp Commander Lt Gen Kapil Vij was removed under US pressure. Musharraf threatened India, and got Pakistan army mobilised. PM Atal Behari Vajpayee though sceptical of the seriousness of Musharraf’s threat, decided not to carry out the military attack planned for 14th January. COAS Gen Padmanabhan 15TH NDA, and CNS Adm Madhvendra Singh a ship mate, related tales of that challenging year. In clearing mines Army lost 700 souls. In Op Pawan 1987-91 Army lost 1400 souls. In India Government decides military strategy, as the obedient Armed Forces are not in the decision making loop and the CDS is also a bureaucrat. With nuclear arsenals, large scale wars are unlikely, but even poor North Korea has threatened USA. Pakistan uses the same stick with India, as in Kargil. Skirmishes like China executed to intrude India’s Ladakh will happen.

Finally, in IDF’s book on Navy’s Operations details how Mrs Gandhi was under pressure from USA, 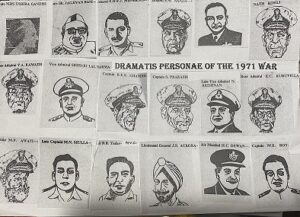 and even Ambassador Chandrashekar Dasgupta in his book, “India and the Bangladesh Liberation War”, gives credence to Ambassador DP Dhar as Mrs Gandhi’s points man and PN Haksar as the strategist for 1971, and explains why under Geneva Convention Mrs Gandhi was obliged to return 93,000 Pakistani troops(POWS) kept too long, and could not bargain with Pakistan as per Geneva conventions. India is not yet as powerful as China, or USA to trespass, or like Russia which took over Crimea from Ukraine for its survival. Indian Diplomacy will have to manage Pakistan and China till the.

As a footnote IDF called on FM Manekshaw at Stavka in Conoor in 1979 with the Shivrams his friends, and asked about the 1971 war and he said, “ I do not comment on my role, ask others, and drink your Rum or go and drink Scotch on your ship”. It was Three no Trumps for me. Shan No Varuna.

Previous Post: PAKISTAN HAS RELEASED ‘HANGOR’ A’ TELEFILM BASED ON THE SINKING OF INS KHUKRI IN THE 1971 WAR & IDF POSTS THE CONNECTION WITH A LIVE UTUBE ON INDIAN NAVY’S 1971 WAR
Next Post: GOA OP VIJAY HAS A NAVAL CONNECTION—– ON 19TH DECEMBER PM MODI CELEBRATED GOA’S 60TH LIBERATION DAY AT THE SHYAMA PRASAD MUKHERJEE STADIUM WITH FUNDS FOR GOA’S FUTURE DEVELOPMENT WITH ONE EYE ON ELECTIONS DUE NEXT YEAR.. Part 1