Ranjit Rai April 11, 2020 This is a Prasun Sengupta alerted, 5th IDF COVID-19 ‘Non India’ IDF Analysis based on World, Bloomberg and Chinese media and more from Epoch Times known for information on China as Chinese from China,  pass and send messages, or travel from China with facts, that Epoch analyses. In 6th IDF and Prasun will Analyse the law suits filed against China for damages in trillions even by the Bar Association of India with unspecified amount, with inputs from Oxford Lawyers.

IDF does not vouch for the video. Make your judgments, 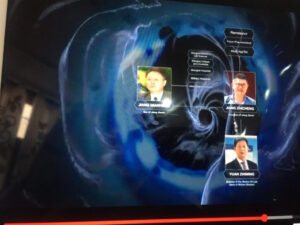 if COVID-19 is man made, which it looks like from Wuhan’s Military Management Virology Bio-Warfare Institute P 4 (funded by French PM Raffarin and designed by RTV but PLA completed it in 2017 and ousted the French). Was it leaked by Design or Human Error that Militaries know well happens with machines and weapons….but see the Video you should, as Indian TV is entertainment centric …devoid of Analysis except WION ! GOI’s DD has to be careful on content, as it is bureaucratic funded by the Government in power. Private Radio is not allowed Current Affairs, Sports or News ! Chinese or Pakistan Tv is not allowed in India but widely available on Internet and U Tube. Indians are missing education especially on Sports on Private Radio which even Communist Countries have in dedicated channels ! IDF is an AIR/DD accredited Sports commentator without Employment despite Art 21 of the Constitution.

Epoch Times founded by Tony Tang is run by Ethnic Chinese Americans in the USA who support Fulong Gong, funded by Chinese living outside China to push Democracy ++ into China. Religion can set fire to CCP and Communism as a Religion,  as does in a democracy too. Epoch  funded the President’s advertising on FaceBook. Guess they get CIA and Think Tank funding for data and policy papers, and Information Warfare(IW). 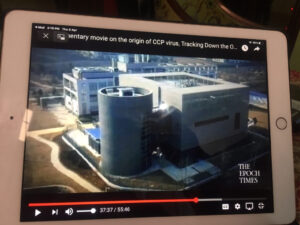 The VIDEO lists the detailed origins of viruses and Covid-19 and papers of Chinese Virus experts like Virologist Dr Shi Zhengli presented 2014 onwards (also funded by USA). She wrote how the Zhoushan Lab Bat Virus was taken to WUHAN’s P4 lab for reverse synthetic engineering experiments. It leaked in Dec 19. She was silenced as another girl student at the Institute whose photo is on the web of the Institute disappeared. Dr Lieu wrote papers on 12th and 30th Jan hoping to help but Contagion spread widely in Wuhan in January and was treated as pneumonia.  Wuhan and Hubei were sealed. Chinese New Year of the Rat was being celebrated on 25th Jan, and Chinese leadership smelt the origin of COVID-RAT and blamed US troops and bat butcher and later covered it up with. “ it was not from the lab“ and PLA Colonel Wen Li took over the Institute but papers by Dr Zhong and China’s Pasteur Institute began work and located some Genomes and Fudan University.

Colonel Yuan Hua, political commissar of Wuhan Huoshenshan Hospital, constructed a field hospital within ten days in February 2020, for CONVID-19 outbreak, and is still in operation on the frontline to fight the disease he reports in an article without stating how it began. No one in China does. IDF also speculates from Data and looks at inputs.

COVID is now a catastrophic Pandemic for the world. It threatens the West, with unemployment payments more than the developing and poor nations, who suffer down turns more. The world’s power equation may change and China may rise more or go down again to the USA.

What follows in the Expose is about a Cover Up. Animal Virus cannot spread so wide,  so fast as a pandemic. Genome was found with P- Protein details in China and learnt of the origin, doctors must see. CCP asked all sample viruses to be destroyed and data and blamed bats but does Wuhan Animal market have bats is questioned and China blamed US troops and Canada and the World remains confused ! IDF too, and looks to Intelligence Agencies and Missions in China to release their analysis. 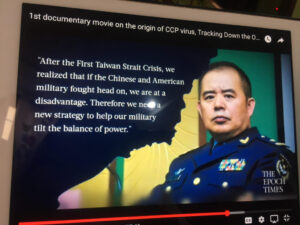 In IDSA Rutledge Journal in 2015 shown in the Video, an Israeli Expert Danny Shoham’s detailed article which  warned of Bio Warfare to be feared from China with details of all laboratories, though banned by UN.  IDF explained in earlier posts. Gen K Sundarji too had complained he was not fully kept in the picture. It shows EPOCH has research skills to ferret 2015 data in IDSA, and Intelligence/DRDO Life Sciences Lab  must have followed Shohan with SAs to Chiefs on NBCD. SA and IMCR Doctors praised in Video must be briefing PM, PMO and NSA for decision making. Navy chief Admiral Karambir Singh has wisely kept ships at Sea with a personal message. BZ.

Jiang Zemin’s powerful Princeling son JIANG MEINHANG graduated in Life Sciences, and worked at Wuhan and headed Military Labs and Academy and set up labs and hospitals in Shanghai. His son JIANG ZHICHENG studied Pharma and runs China’s large Pharma Company FOSUN and non-profit Wu App Tec and video claims it has produced Remdevisir  anti dote (Sars ?)……Does Trump knows more and wants cooperation with China ? The US, UK and Israelis must know by now. The IDF wrote China asked Russia for research and got feedback.

China may someday provide the antidote if they have it. The world runs on Money and Military Power. China knows it cannot win a war against the USA. It is in the video and their INFINITE WARFARE BOOK. Every Leader’s desire is to raise his nation with Economy which delivers Military power and that will be tested now—China or USA ?. If the Virus is man made and original virus samples are not available but mutated,  finding the Genome and Protein for a full proof Anti Dote will be challenging for Virologists and the world will suffer till then ! Looks like CHIREYA CHUK GAYE KHET ! Shan Na Varuna

Previous Post: IDF ANALYSIS OF ‘EPOCH TIMES’ EXPOSÉ DEPICTING COVID-19 WAS MORE ‘A NEGLIGENT HUMAN LEAK’ OF THE SYNTHETIC VIRUS FROM WUHAN’S P4 MILITARY LAB THAT CHINA DENIED TO GUARD CCP & XI IN POWER WITH CHINA’S SECRECY & INFORMATION WARFARE(IW) MACHINE & SUPPRESSED ALL –COVID WILL INFECT GENERATIONS IF IT IS A VIRULENT MAN MADE VIRUS AS ANTIDOTES & VACCINES WILL BE CAHLLENGING
Next Post: REMEMBERING COL LESLIE SAWHNEY HIS WIFE RODABEH SISTER OF JRD & ADM KARMARKAR IN THE NAVY OF 1960s & THE HOUSE OF TATAS