Ashton Carter a Yale Rhodes Scholar, served as Undersecretary of Defence for Acquisition, Technology and Logistics (2009-11) was twice passed over for the Def Sec job, but served as Pentagon’s Chief Operating Officer 2011-13 under Leon Panetta and Chuck Hagel and worked with NSA Shivshankar Menon on DTTI and is on his second visit. He has said, “We have much more to do with India than Pakistan……..What we are looking for is a closer and stronger relationship, because it is geo-politically grounded, …… we have to rebalance, ……which is India’s Strategic approach Eastward ………… our Defence Technology and Trade Initiative (DTTI) , is an effort to work with India and to do something they want to do ……..These are like two hands grasping one another and that’s a good thing”.
Those who forget history are bound to repeat the mistakes. India stood on the fence with non-alignment in the cold war and neglected national interests which stunted it analysts say, so India’s new strident BJP leadership has decisions to take in this new Cold war arising between USA and China and over South China Sea incursions by China which are completing. China may have an ADIZ soon as planes and fighters have landed with missile launchers, media reports with photos.

Now after long bilateral turbulence with ‘Foggy Bottom and Pentagon’ when USA considered India a ‘Soviet Camper’, even after Soviet Union collapsed, USA’s military tilted to Pakistan in wars and supplies and economic aid to Pakistan——India remained peeved with USA, called Kutti in Hindi.

That era is over and now it is Jugal Bandi (joint drumming ) to cope with China’s rise and OBOR and China’s near take over of POK, parts of Baluchistan and Gwadar and a new submarine base in the offing like Soviet Union made for India at ND (V) Vishakapatnam which has paid huge dividends.

Post Gen Claude Kicklighter’s 1991 agreement for US Technology Transfer Indian Navy forged Malabarian ties with USA and at sea with US Navy away from the gaze of media and sent its brightest Cdrs and Admirals to US Naval War College junior and senior courses, with US officers at Rhode Island who learnt importance of strategy and the Mahanian theory for India’s maritime rise. Then came sanctions after Shakti nuclear bomb blasts. But 9/11 attack in USA on 11th Sep, 2001 changed it all and USA wooed India and the Kutti (anger) was over. 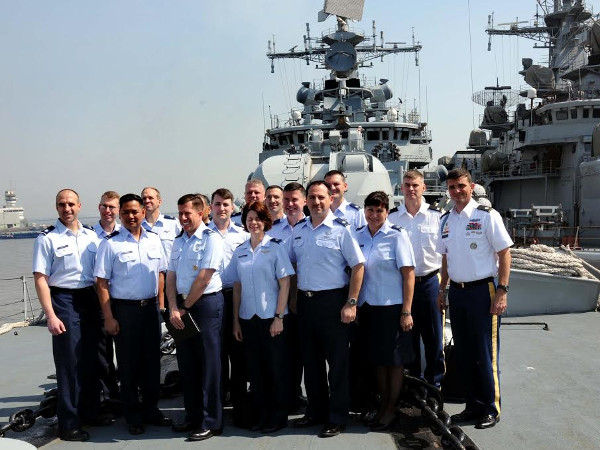 Sanctions were lifted when Indian Navy Convoy Escorted US ships in Op Sagittarius in the Malacca Straits endorsed by US NWC graduates as Chiefs and top brass at NHQ despite Malaysia’s objections that it was not ‘Innocent passage as per Freedom of Navigation’ as per UNCLOS 1982 and denied IN ship calls and harassed Indian soft ware companies in Malaysia——that is the real world,

Singapore took advantage and today Singapore does SIMBEX with IN and provides Operational Turn Around (OTR) carte blanche facilities to Changi base, where US Navy carriers and Light Combat Ships (LCS) are berthed. India joined the war on terror against the Taliban and Al Queda after 9/11 in Afghanistan and gave development aid and succor and training but all without strategy of partnership as geography and enmity with Pakistan were obstacles.
Since then, US having need in its national interests to check China’s rise found containment as in past form of geographical means not possible, because China rose like an economic and military sphinx. USA based more naval assets and exercises off China, Korea and Japan.

China thwarted USA’s maritime ambitions and checked US Navy with a very potent Anti Axis and Denial (AAD) strategy with ships submarines and missiles and naval aviation against USA’s forces by reducing its Army and beefing up its PLA Navy and its submarine and air arm for Air Sea battle and has reorganized the Armed Forces with a new strategic support arm for cyber and space. North Korea also threatened USA.

Indian Navy’s small rise for Make in India has happened, and gave courage to PM Narendra Modi to sign a Joint Strategic Vision for Asia Pacific with President Obama. Navy joined RIMPAC exercises, the largest in the world.
Carter will be in Goa and visit temples and Navy’s newest scenic base Karwar 10th to 11th h April hosted by RM Parrikar on INS Vikramaditya commanded by US War College trained Capt Krishna Swaminathan and may even meet naval pilots trained on US carriers, and hold talks on USS Blue Ridge 7th Fleet Flagship and then New Delhi and meet PM Modi too. Possibly Vice Admiral Joseph Aucoin 7th Fleet Cdr will be on board Blue Ridge.

Carter’s visit comes after Pacific Commander Adm Harry Harris, and Vice Adm Aucoin visited Western Fleet last week and USA’s AFPAK rep Wolson came to Delhi to meet NSA before the crucial USA-China-Pakistan meet on Afghanistan to ask Pakistan to mellow its stance on Taliban. Pakistan is acting tough in Afghanistan with tricks, as it does as a policy. Carter will then head East.

So USA had to chose the Pivot and re balance and got India, Japan and Australia and side show Singapore and Philippines in the new form of QUAD at sea to check China, China objects. Indian Navy recently did a three quarter QUAD with USA and Japan and Ausindex just before in the Bay of Bengal and 17th Simbex with Singapore in the South China Sea.

Will Carter be able to make USA’s embrace of India tighter ? India is the rising economic hope of the World Bank to revive growth as China slows but has $ 2 trill in reserve and has a handle to even buy Tata’s Corus Steel in UK for prestige, but refuses to nail Massud Azar and JEM in UN. Carter wishes to open Defence technology for Make in India while EU debates exports of defence goods to China. .

Indian business men especially in Defence seem peeved as Black Money has been reduced by BJP, but reforms to make up for that are lacking, as FDI is waiting to come. Even RM Parrikar has not been able to issue a full DPP and define rules for strategic partners which Carter may ask. At the well organized DEFEXPO-16 in a deserted field in Betul Goa with few Indian uniformed visitors and 100s of US and other suppliers and 1000 exhibitors, Anil Ambani of Reliance Defence as key note speaker pleaded with RM Pannikar to give new entrants like him chances for a level playing field to fructify the MOUs he and others have signed for items approved by DAC.

India has strengthened a new era of close nuclear and military purchases worth $ 14 bill and strategic cooperation with USA which will be analysed and closely watched by Beijing and Global Times will comment on Carter’s visit when he will offer F-16/18s and General Atomics Avenger (formerly Predator –C) latest drones and Javelin missile production with TOT in DTTI and try to thwart 36 Rafales ordered by PM Modi and ask to ink LSA, and later BECA and CISMOA on Indian terms as LSA is already partly working with FMS as RM disclosed India’s MOD has parked $ 3 bill with FMS. If LSA is signed all maritime services and purchases made by USN in Singapore and Dubai could shift to Indian ports. .

To add grist on 25th May, 2015 Defence Minister Manohar Parrikar in Act East signed a 5 year strategic partnership with his Vietnamese counterpart, Phung Quang Thanh when USA was wooing Viet Nam as the guardian of the South China Sea after India’s pledge for Freedom of navigation though joint patrol is ruled out. India may agree for co-ordinated patrols as Indian Navy does with ASEAN navies.

With the DTTI regaining momentum in BJP time with NSA Doval, the US is reported to have set aside $20 million for strategic cooperative science and technology projects with India and wants to help Indian Navy’s future aircraft carriers like Vishal with nuclear power and E-Mal launches and studies are on.
In a recent development Sri Lanka which was the first after Maldives to support China’s OBOR has just re-endorsed OBOR as it has debts it cannot pay to China and its called Chinese use of ‘Tribute strategy’ (like our NPAs bankers want to talk to defaulters) and the board game of surround Weiqi (GO) referred to by Kissinger in his book on China 20 times to check India in the Indian Ocean region. NSA Doval is also headed to China and times are interesting.

Previous Post: ARMY MUST ENGAGE PAKISTAN’S FOR CBMs AND ‘RECONCILIATION’ AS EFFORTS FOR ‘RESOLUTION’ OF DIFFERENCES’ AND ‘COMPOSITE DIALOGUES’ ARE STALLED
Next Post: NAVY TO FINALLY GET JAMES FISHER DEFENCE DSRVs IN MOD’S JUGAD POLICY FOR SAFETY SECURITY & ACQUISITION AND ‘RAM BHAROSA’—-IT WORKS ?