PART II IDF ANALYSIS as IDF LEARNS IGC brass have seen www.indiadefenceforum.com views but looks to Navy to take lead as the Service In Charge of Coastal security with INCG in a doubly worded order from MOD in UPA time.

IDF has already credited Pushpita Das a researcher in the last post for her pertinent comment when she asked , “ WHY A CENTRAL MARINE POLICE FORCE (CMPF) IS NOT REQUIRED FOR COASTAL SECURITY”. IDF agrees with her and IDF posted the arguments in Part 1 with support masala on www.indiadefenceforum. Here is more as ICG is aware of IDF views as pertinent, but who will bell the CAT ! 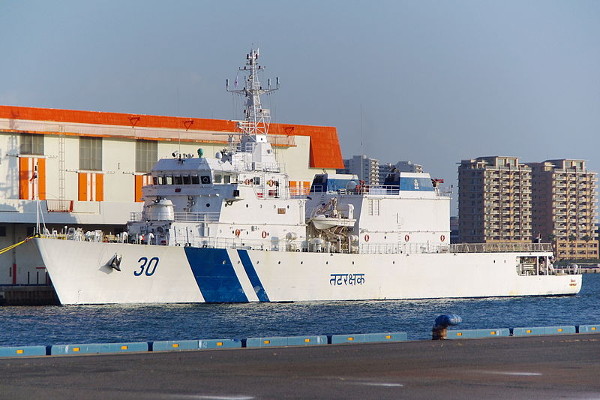 IDF was prompted by the Home Ministry review meeting to assess the status of the country’s Coastal Security organised by the Minister of Home Affairs (MHA) Shri Rajnath Singh on June 16, 2016 in Mumbai, and RM Parrikar attended. The suggestion for a new CMPF found favour with the HM who called it a good idea and four maritime state CMs and Union territories agreed for the establishment of a Central Marine Police Force (CMPF) to patrol the coastal waters. DO WE NEED ANOTHER para SEA GOING behemoth for defence or beef up ICG ?

IDF called its ‘Empire Building’ as the suggestion to raise a CMPF was made by Maharashtra’s new kid on the block RSS CM Fadnavis to have more control over the police so he could blame the Centre if any thing went wrong a la 26/11. The Union Government has already been bearing the financial burden of the Coastal Security Scheme. So why not the Indian Coast Guard (ICG) FOR THE TASK ? IDF begs the question like Groucho Marx would have !

IDF further reviewed this and Coastal Security Seminar was conducted by Headquarters, Maharashtra Naval Area, under the aegis of Headquarters, Western Naval Command on 24 Jun 2016 at INS Angre, at Mumbai thanks to FOC-in-C West Vice Admiral G LUTHRA and shows the concern of the Navy. 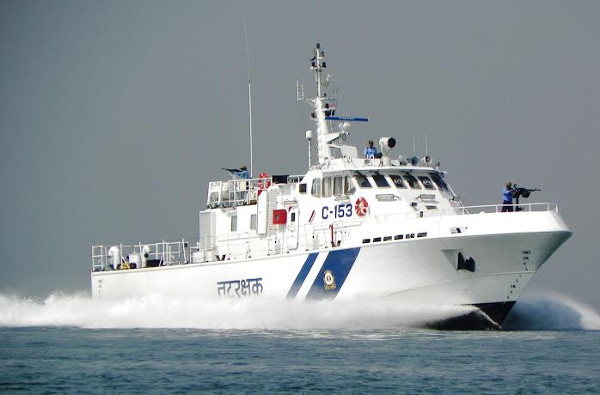 WNC stated it was a follow up seminar to the significance and backdrop of HM Shri Rajnath Singh’s on 16th.. .The Coastal Security set up in Maharashtra has undergone an overhaul post 26/11, with the setting up of a digital radar chain and multitude of agencies already like MAC and JOC both civil and military, in the Coastal Security domain that ICG co-operates with. MUMBAI Port needs Bio Metric and Navy has a 1000 strong SHORE FORCE called Sagar Prahari.

This has necessitated synergy and training by ICG and Navy , joint manship and close cooperation amongst all the stake holders, with regular exercises by the NAVY AND COAST GUARD WHICH HAVE RESOURCES and trained for the task to track fishermen and boats.

The Police is a different kettle of land based fish looking and living on goodies and to make Empires also in India’s Intelligence. A new CMPF will be the same wine which will need new resources (bottles) and it a Parkinsonian Idea and may be a RSS nominee is already in view for it by HM who IDF predicts will go far as he is sharp and a die hard moderate RSS poor in English ! Was BJP President and contributed much to its rise.

The Mumbai seminar was attended by civilian representatives of various organisations involved in the Coastal Security of Maharashtra only and personnel from Indian Navy, Indian Coast Guard, State Intelligence Department, Marine Police, Maharashtra Maritime Board, Dept of Atomic Energy with has reactors on the coast, Dept of Animal Husbandry, Dairy and Fisheries, Mumbai Port Trust, Jawahar Lal Nehru Port Trust, Representatives from Coastal Police stations of coastal districts of Maharashtra, Port Officers of Minor group of ports of Maharashtra and ONGC. 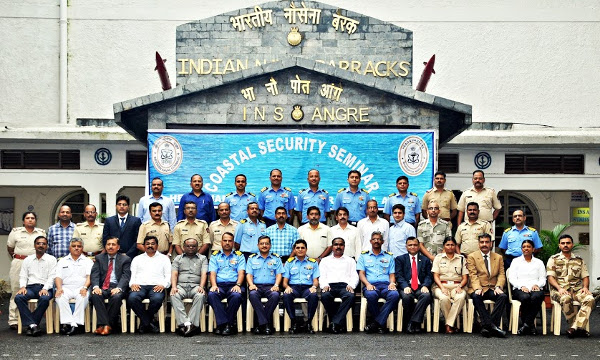 These are stake holders in the Coastal Security set up of Maharashtra and would love the responsibility to be taken over by some one reliable and I wonder after a merchant ship reached the AIRPORT BANDRA LINK and just missed it, they trust the MARINE POLICE, or saw pictures in the media of their imported Marine Police boats lying without fuel.

FOR THE FIRST TIME IDF thanks to the Navy which is OVERALL INCHARGE of Coastal Security with ICG the seminar provided all stakeholders a platform to sensitise each other with their perceptions of the dangers, now with a new animal ie ISIS lurking and understand the challenges of Coastal Security which only sea going professionals can truly appreciate to react. There are young retired waiting to be employed which Police does not.

It is reported Presentations were made by the stake holders bringing out their Coastal Security organizational set up and IDF states the set up lacks COMMAND and CONTROL rules as we saw in 26/11 between the Marine Police, the shore police and NSG, and a MARITIME ADMINISTRATION AUTHORITY promised in the NDA/RSS manifesto and a MARITIME SECURITY ADVISER awaited.

The seminar discussed their existing and envisaged capabilities, constraints / challenges faced during the conduct of Coastal Security operations, areas of cooperation with other stake holders and proposed way ahead towards fostering synergy and streamlining the Coastal Security operations off the coast of Maharashtra only, but it is not known if there was a referendum on CMPF. UNLIKELY, AS IT WAS a MAHARASHTRIAN SEMINAR not national ! . 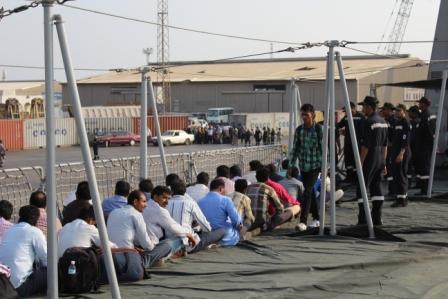 The Coast Guard flotilla has 18 armed Offshore Patrol Vessels (OPVs) in the 75 meter to 105 meter range above 1,200 tons, 28 Fast Coastal and Inshore Patrol Vessels (FPVs), 17 Interceptor Boats (IBs), 6 Hovercraft, 10 Interceptor Craft, 20 Dornier aircraft and 25 Chetak(Alouttees) and Dhruv(Advanced Light Indian made ALH) helicopters, manned by some 5,500 personnel, which is not much for a large coast line. ICG still leans minimally on the Indian Navy for specialised manpower and training assistance.

The service is undergoing an expansion programme with the induction of three more large more OPVs at Goa Shipyard Ltd, 8 FPVs at Hindustan Shipyard Ltd, FPBs at Larsen & Toubro Ltd Interceptor boats at various Government and private years. The ICG has tendered for 7 large OPVs with international bidding to be built in Indian yards and the result of the competition is awaited. Another 6 large OPVs are nominated to be built by Goa Shipyard Ltd.
The ICG has 7 Griffon 8000(TDM UCAC) hovercraft serviced by GRSE and has ordered more. The ICG is scheduled to order twin-engine helicopters and 6 medium range surveillance aircraft(MRMR) and Indian built Nishant UAVs The initial funds of Rs 2000 crores($ 400 mill) for a five year Coast Guard Development Plan (CGDP)have been earmarked for an ambitious force level of 150 vessels including 12 hover craft and 95 aircraft and helicopters , 18 UAVs, and over the horizon aerostats, and to complete the coastal radar chains as per the perspective plan 2012-17. This will give a boost to surveillance in the maritime zone of India.

In co-operation with the Directorate of Revenue Intelligence and Customs the Coast Guard over the years has apprehended 716 foreign fishing vessels found illegally fishing in Indian waters and earned revenue of approx US$ 0.15 billion. In addition the Coast Guard has undertaken over 72 search and rescue (SAR) missions and recued 312 lives and freed the pirated ship Allondra Rainbow in 199 the Arabian sea in a historic case, and has exercised with Japanese and Korean and other Coast Guards in Indian and foreign waters, and patrolled the Sri Lanka-India waters constantly in Operations Swan and Tash during the LTTE crisis, and since as fishermen stray into each others waters, and the case of Kachitivu island and fishing around and the Seethusmaudram canal which India plans between India and Sril Lanka to cut sailing distances has led to some differences.

With Shan No Varuna IDF ends with the The Mission Statement of the modest Indian Coast Guard.

To protect our Ocean and offshore wealth including oil, fish and minerals.
To assist Mariners in distress and safe guard life and property at sea(SAR).
To enforce maritime laws with respect to the seas, shipping, poaching, smuggling and narcotics.
To preserve marine environment and ecology and protect rare species.
To collect scientific data and back up the Indian Navy during war.

Previous Post: INDIA PAKISTAN CHINA MEET IN SCO TASHKENT AND IN SEOUL NSG WITH USA —NSG OUT COME COULD BE SURPRISING WITH CHINA THE ELEPHANT IN THE ROOM AND BIG DADDY USA DECIDING MUCH
Next Post: ELEPHANT AND DRAGON NAVIES EXERCISE EXPEDITIONARY STRENGTHS—INDIA IN VIETNAM-SOUTH CHINA-SEA JAPAN-VLADIVOSTOK AND HAWAI– THE PLA(Navy) ROAMS IOR WITH AN SSN