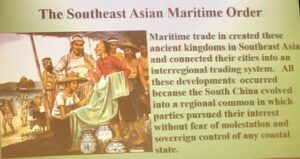 On 28th August the United Service Institution(USI) hosted the Chief of the Naval Staff Admiral Karambir Singh, the last in the series of lectures by the Chiefs of the services. Seats were limited with Covid protocol, but the proceedings and the long Q&A session were uploaded in real time on Utube with wide coverage, depicting  the importance of India’s Navy in the first half of this century. The subject was the “Transformation Of The Indian Navy To Be The Key Maritime Force In The Indo-Pacific”.

While other lectures by Chiefs were service specific and equipment oriented, the CNS on the Indo Pacific region spoke of its construct, its challenges and proved it was a predominantly maritime construct, in what is a Maritime Century. The gallop of space technologies, mobility and internet communications (C4ISR) and multipliers like artificial intelligence(AI) and unmanned vehicles, has brought about the binary changes in today’s state of peace and conflict which have  reduced the importance of land issues, he described and showed confidence of the Navy as a net security provider.

IDF adds that nuclear laden powerful states make state boundaries take a different form and IDF adds even the Ladakh transgression by the PLA in 2020 witnessed one hand to hand clash, and two Divisions plus handled the conflict with MEA and NSA and top Army leadership meeting counterparts from China to keep the powder dry as both militaries remained tense, and Indian Air Force went into play. Boots on ground are now meant to occupy territory. The strength of the PLA(N) came up in Q&A as a fact, India has to face.

CNS spoke of the aspiration of Indians and recommended an outward look as opposed to inward earlier, and drew a mental map of the Indo-Pacific for the audience which is a technique of putting issues in a geo-strategic perspective and said India is at the core of the defining idea of our times. The Director USI Gen Sharma in his summation thanked the CNS and complimented him for the  philosophical touch he gave to his delivery and IDF confirms it was predominately a philosophical speech with nuggets of military wisdom about the role of the Navies in the Indo-Pacific.

CNS emphasised that the  Indo Pacific region has taken prime importance as the area has 60% of the world trade, 61% of the world’s GDP and 63% of the island nations with varied interests of the ambitions of the residing nations and countries like France, United Kingdom Germany also have lent interest besides USA. He did not mention QUAD in his speech but in Q&A he mentioned QUAD is ‘not marching together’ but is a CO-ORD and will gain in strength. IDF understands this as the critical mass for action in the Indo-Pacific he alluded to, and he left some part of the QUAD question to the MEA.

CNS did not list platforms of the Navy but by  maritime geography he listed the bigger responsibility in the sea space and how Indian Navy copes and  acts and  though land centric strategies are relevant, maritime strategy has  more capabilities and used the words, ‘Mare Labarum Freedom of the Seas’ and its advantages. He assured the audience India’s   future Navy will cater to brown and blue water capabilities and  maritime operations in peace and war for which the Navy has a template. In the same tone and during his lecture he did mention that a certain country is changing the name of the game in the Indo Pacific and went on to say that when somebody changes the name of the game(South China Seas?), there are also opportunities. IDF is reminded of the conversation in the epic Ben Hur when the Roman General his friend Messala, suggests Romans must hurt Jesus a Jew whose idea was flourishing, Ben suggests that better it was a  new idea to offset the old. Ben Hur an atheist began to believe in Christ who blessed him and cured his mother and sister of leprosy.

CNS spoke of the need for speed of operations in today’s age which also explains that there is a sensual need to have awareness so that there is readiness and spoke  about the Indian Maritime Analysis Centre(IMAC) which is at Gurgaon and how the  Navy has amalgamated artificial intelligence to get a map of what is the current scenario and  looks to juxtaposing AI for analysis. CNS also stated  that next door to IMAC is the Indian Ocean Region–Information Fusion Centre(IOR-IFC) which has the participation from 21 countries with six foreign officers and said three more are  slated to join soon. He said these are the low hanging fruits and he also went on to speak of maritime domain awareness(MDA) with long legs like the P8I aircraft, satellites and mission-based operations of ships at the choke points that can leverage geography with which India is blessed. Ships are tuned to be first responders and have medical facilities.

In the future Navy CNS did not go into the figures because the IDF noted his speech was very wide and the audience he mentioned was quite informed. He explained that he was a firm believer there is a need for future proof, blue water and  brown water Navy with unmanned  vehicles and technology at the core. It is ample proof that he was speaking about the ships of the Indian Navy which have quality but there is a lack of quantity. 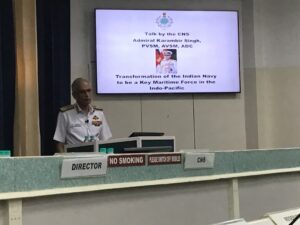 In the question answer session the Navy’s  low (14%) budgetary situation of allotment from the Defence Budget came up with  two participants  commenting on the cost  for aircraft carriers and another  that the Indian Navy needs quantity and asked could leasing of ships help .

Admiral Karambir Singh clearly stated that there is a need for integration of the three services for mass, and in the question answer session he didn’t say there is a shortage of platforms in the Indian Navy but mooted an idea that the Coast Guard in numbers has become equal to the Navy. This needs to come under the Navy for critical mass and coordination and both put together will have greater strength. On lease procurement as the Navy was the first to lease two Sea Guardian drones  he admitted Navy took the lead as it is in the Defence Acquisition Procurement(DAP) manual, but leasing needs cost analysis but did say the drones served in the mountains. A professional classified question would be was it line of sight VHF control, or by satellite from Ladakh or Himachal. 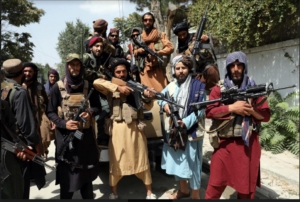 CNS listed the over dozen Navy ships currently exercising abroad in Europe, Alexandria, Guam for Malabar 21 the 25th in the series, and Southeast Asia as the outward look for exercises and for low lying fruits. He also explained procurements now have a faster route.

Overall it was a stimulating talk to understand the complex situation India is in the Indo-Pacific at a time Afghanistan has collapsed to the Taliban and could see a  civil war in our backyard. Pakistan is not likely to forget India aided the Northern Alliance of Ahmad Shah Massoud the Lion of Panjshir. The three services will have to be alert as news has come in US Navy has positioned aircraft carrier USS Ronald Regan off Pakistan after the ISIS(K) attack in Kabul killed 11 US military and Reapers may have operated from on board is IDF’s conjecture only. The talk of 90 minutes of nuggets is on the link.