By sheer happenstance, four OCU IAF Hunters under Wing Cdr Don Conquest Vrc(for Longewala) from IAF station Jamnagar struck the Kemari oil tanks on 4 Dec morning with front guns. On returning to Jamnagar the Hunters were rushed in panic to Jaiselmer to aid Col Chandpiri and the films of the attack in the planes got merged with actions in Longewala so the Navy claimed the fire on the Kemari tanks. History was corrected by this writer with evidence gathered from Log Books and Pakistan. YOUTube link   https://youtu.be/jP9v4-PzS20

India’s Golden jubilee Swaran Jayanti 71 War Week began from 30th November as Admiral Karambir Singh known as the Grey Eagle of the Navy(the Senior most Aviator in the Navy), handed over the White Baton to Admiral R Hari Kumar, a Gunnery Missile specialist on the lawns of the South Block. In his tenure Admiral Singh spoke carefully but firmly, avoided TV showings but spoke his mind at Government Conferences, Think Tanks and in October explained why India needs a third aircraft carrier on board USS Carl Vinson 110,000 aircraft carrier off Vishakhapatnam. CNO Michael Gilday stood by. Karambir’s experience as head of Project SEABIRD pouring over voluminous project reports that Sinclair from Australia and HaskoningDHV from Holland had produced for the Naval Base INS Kadamba coming up at Karwar, enabled Admiral Singh cut his teeth to supervise contracts. No wonder he speedily acquired two Sea Dragon Drones from General Atomics USA on lease with US connectivity and equipment via the emergency funds PM Modi allowed to Services after China’s foray in Ladakh, and being an aviator honed P8I flying with reliable Boeing 737 engines, sophisticated detection equipment for weapons and EW with Internet connectivity, to help the other services in operations, with software defined radios. 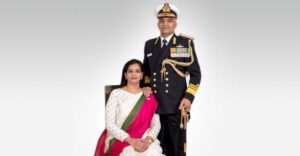 CNS Admiral Hari Kumar comes with experience having commanded five ships including the small powerful Kora with Uran missiles of a big ship, Gunnery Officer (GO) of INS Ranjit with P-20 and Volna(Pechora) missiles. As commissioning crew of INS Ranvir he went on to command it with Brahmos missiles and the Aircraft Carrier INS Viraat. He comes with qualities of ‘run deep run silent’, after heading the powerful Western Command where he oversaw major exercises including Malabar. He was the benefactor of Admiral Karambir Singh’s style of delegating a lot to his C-in-Cs and Principal Staff Officers(PSOs), pushing them and grooming the next level with thought for continuity and a high tempo in Nvay’s Covid safety and evacuation operations. 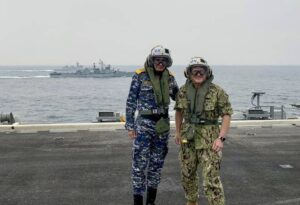 In Karambir’s tenure ships sailed far and wide for exercises, despite a low budgeted Navy(13%) and 130 ships in the order of battle(ORBAT). Before demitting office he commissioned the fourth Scorpene INS Vela and RM Rajnath Singh commissioned the powerful 7,200 ton INS Chennai. CNS Kumar will induct long awaited Lockheed Sikorsky MH60R helicopters with 120 KM NSM missile from Konsberg and Mk48/54 torpedoes from USA and the second SSBN Arighat may join silently and get Blackshark(?) Torpedoes for the Scorpenes as Leonardo(Finmencca) is out of the Black List and RM has eased the list though AW-101 case breathes.

Earlier Admiral Kumar ) assisted the CDS General Bipin Rawat, as the his CIDS/VCDS so its homecoming to the Inter Service atmosphere in Delhi as Theatre Commands are being pushed by CDS and has asked for reports by April 2022. A Maritime Command is contemplated and will be on Kumar’s priority plate. As eldest of the three brothers he studied at Sacred Heart Convent in Tamil Nadu, and then Trivandrum and learnt the lesson to use rules to the care of others he told Manorama. He married Kala Nair and she saw separated Naval service when he went to Somalia for 45 days but came back six months later, and his daughter was born now in New Zealand, he has not seen her since Covid.

The Navy has been tasked with SAGAR monitored by PM Modi and to be the Net Security Provider(NSP) in the Indian Ocean Region(IOR) since 2013 now has the pulls and pushes that India’s advantageous maritime geography holds for USA and the QUAD construct muddied by  the bait of nuclear submarines for Australia in the AUKUS treaty while a combined China with Pakistan looks to link the Pacific with the Mediterranean via the Indian Ocean with bases Admiral Arun Prakash explains. EAM is globetrotting to grapple with that conundrum, and hope Navy is in the decision making, because a cold war is on between USA and China described by Uday Bhaskar as, “the US-China schism, contemporary geopolitics is rife with contradictions. This picture is in stark contrast to the optimism that all boats would rise together in the wake of the Cold War”. Navy’s interests must not sink.

President Putin who visits only for business, has recently tested the Zircon hypersonic missile to scare USA and moved 90,000 troops to the Ukraine border is coming with Christmas goodies two days after Navy Day and few days before President Biden has invited India’s PM to the internet meeting of democratic nations but not China or Russia. This makes India a pawn subject to CAATSA sanctions and President Putin will surely discuss that with sanctions, as India is dependent on Russia for its nuclear and submarine programmes, and other defence supplies. Putin is firm and always surprises !

Admiral Karambir Singh has made Navy’s task easier. He has trimmed Navy’s 2027 Maritime Capability Perspective Plan(MCPP) from 200-ships to a realistic 170. Only two advanced Krivacs(Project 1135.60 are building in Russia’s Yantar Shipyard with 40% Indian content out of 40 on order. Admiral Kumar can continue on the path to continue what is now called Atma Nirbhar by cracking the whip on PSUs and much should be in Admiral Karambir’s classified hauling down Report, in consonance with Indian Navy’s Strategy and Doctrine Documents.

Hindustan Shipyard Ltd(HSL) has turned out a 15,000 ton Missile Tracking ship INS Dhruv. Of immediate concern for the Navy is three Kilo class submarines that need to be refitted in India like INS Sindhukriti at HSL or Russia’s Zyvodochka. Leaks on this have broken. A Kilo submarine INS Sindhuvir was leased to the Myanmar Navy they renamed UNS Minye Theinkhathu, well after Bangladesh received two second hand Ming class submarines from China, which was a lost opportunity. Admiral Kumar will also have to press Government for a bigger budget and A Maritime Security Coordinator. Such a setup is essential as there are 13 Agencies dealing with maritime issues. CNS Karambir mooted Coast Guard give few of its 12 OPVs to the Navy as it lacks training ships. 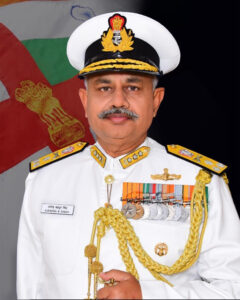 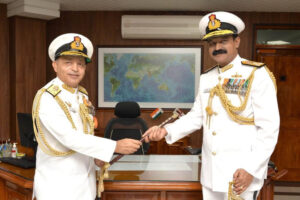 Vice Admiral Ajendra Bahadur Singh, took over WNC from  Admiral Kumar, after handing over Eastern Naval Command to Vice Admiral Biswajit Dasgupta, a seasoned Captain and ENC Chief of Staff who comes with Navy background as the son of Cdr Dasgupta a senior shipmate of writer as the pioneer commissioning CDR(E) of INS Nilgiri, India’s first Leander built before Atma Nirbhar was coined.

Admiral AB was the Fleet Navigating Officer of the Western Fleet during Op Parakram and commanded INS Veer, Vindhyagiri, Trishul (guided missile frigate) and Viraat. He has served as Deputy C-inC, Strategic Forces Command, IDS and the Chief of Staff of WNC at Mumbai so its homecoming.

Vice Admiral MA Hampiholi, a Navigator Ex DGNO smoothly took over the reins of the Southern Naval Command (SNC) in Cochin from Admiral AK Chawla as its 29th C-in-C on 30 Nov coming from the Indian Naval Academy next door, after hosting Maldives Defence Minister Mariya Didi who signed three agreements to build a port and Dornier base, to Chinese objections. Hampiholi knows his task as the Training Command of the Navy is the key to success. Shan No Varuna.

Previous Post: CNS ADMIRAL KARAMBIR SINGH DISCUSSED THE PHILOSOPHY OF THE MARITIME CHALLENGES INDIA FACES IN THE INDO-PACIFIC AT THE USI IN NEW DELHI
Next Post: PAKISTAN HAS RELEASED ‘HANGOR’ A’ TELEFILM BASED ON THE SINKING OF INS KHUKRI IN THE 1971 WAR & IDF POSTS THE CONNECTION WITH A LIVE UTUBE ON INDIAN NAVY’S 1971 WAR