This is a 1350 worded IDF Analysis from details given in Warring Nuclear Navies–India Pakistan ISBN 978-93-5156-638-0 in India’s Wars Chapter available from Variety and an annotated Trishul Blogspot Map of the weeks long standoff since June between few hundred Indian and Chinese Troops.
Both troops are angrily pitched few hundred meters “eye ball to eye ball of each other” in tiny Bhutan’s lower Chumbi Doklam Valley close opposite Indian army’s Doka La post (4100 mtrs) at Sikkim’s edge looking down where China were metaling a Katcha road at Turning Point (see map) in Indian troops view and for the first time were challenged.

Chinese troops were legally stopped and pushed from making a metal road in Bhutan’s lower Doklam Chumbi Valley. India has the backing of 17 and 27 Corps of Indian army poised in Kalimpong and Gangtok in Sikkim, and multiple troops in Bhutan to sandwich the intruders from Zhamperi Ridge and the map shows it all. Chinese know that no one wants war, but want India to blink on its responsibility for Bhutan and this could take time as it is Catch 22 –IDF explains. 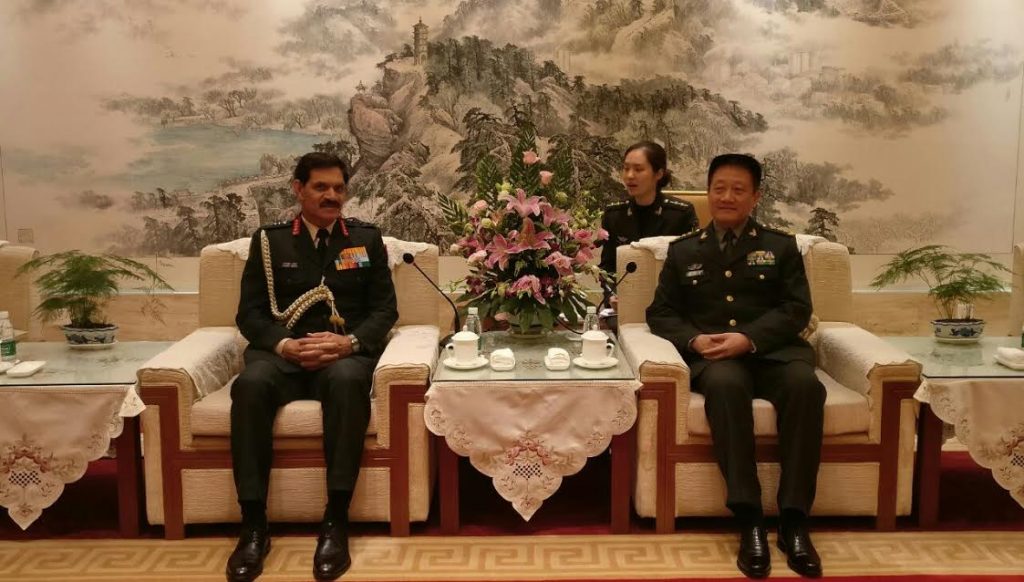 China’s is also flexing muscles and Psy warfare with threats of a skirmish or trouble to break India Bhutan closeness Confucius style as done with Pakistan and other neighbours of India is IDF analysis. India is firm to get PLA back to status quo to the position of June or Status Quo Ante to Batang La North to the tri junction.
India’s stand will be known as NSA Ajit Doval who steers India’s strategic policies with PM Modi is in Beijing to discuss the matter with State Councilor Yang Jeichi China’s NSA for India border.

Will India stand firm as it did for over time in 1988 when Chinese troops stealthily set up a post inside Mc Mahon line at Sumdrong Chu with a helipad in Arunachal when India made it a state of the Union in 1986. In a chess move Gen K Sundarji set up a big camp speedily with helicopters etc next to Sumdrong in Wangdung and stood firm till both retreated. There was a skirmish.

IDF was part of Op Brasstacks & the Chequerboard paper exercise and studied Op Falcon for the book. The Army must have studied those and planned and briefed the Government as knowledge of military matters is taken lightly even in Parliament. Gen Sundarji explained these military and political moves while on holiday in Singapore post retirement, saying India lacks strategic understanding but BJP uses Strategy in politics well for power.
BHUTAN-INDIA-CHINA TRI-JUNCTION INFILTRATED FIRST BY CAMOFLOUGED GRAZIERS AND THEN PLA ROAD BUILDERS OVER YEARS CITING 1890 CONVENTION NOT THE LATER STATUS QUO AGREEMENTS THEY AGREED TO TO PUT THE CLOCK BACK
Article 1 of 17th March 1890 Convention On Borders

The boundary of Sikkim with Tibet became India’s after PM Vajpayee convinced JIang Zimen in Beijing around 2002 to show Sikkim as part of India. In fact, in 2012, Beijing even reached an understanding with Delhi that the trijunction would be finalised only with consultation along with Bhutan, and China was fully aware that India did not accept the trijunction at Mt Gipmochi but at BATANG LA as Bhutan had records. But Chinese were clever like it says it collected Tawang taxes for Lhasa and say they collected taxes from Doklam graziers.They quote …. 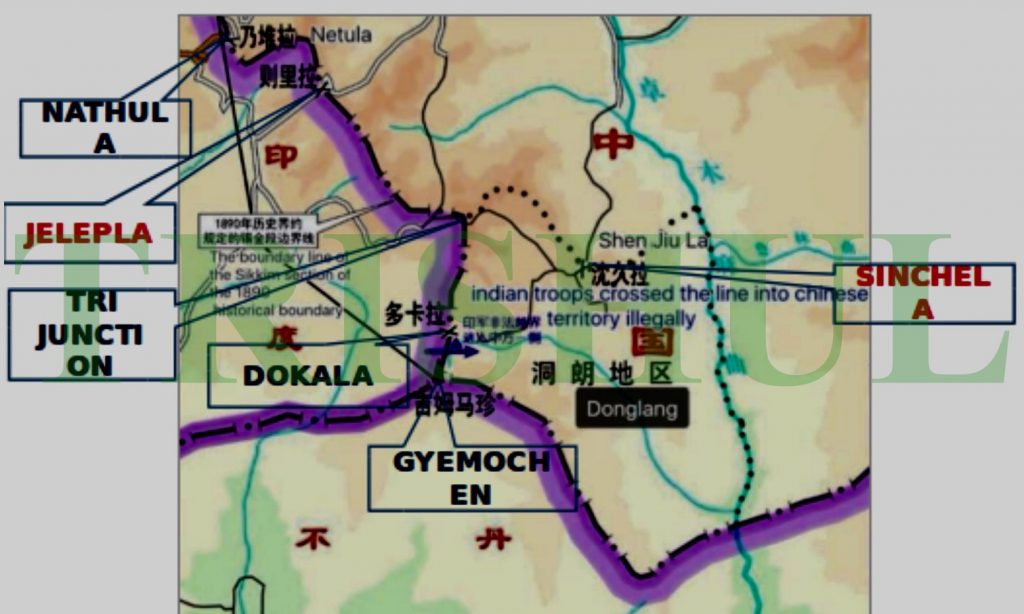 Article 1 of the Convention, signed at Calcutta on 17th March 1890 by Henry Petty-Fitzmaurice, then Viceroy of India, and Sheng Tai, the Imperial Associate Resident in Tibet, reads: “The boundary of Sikkim and Tibet shall be the crest of the mountain range separating the waters flowing into the Sikkim Teesta and its affluents from the waters flowing into the Tibetan Mochu and northwards into other rivers of Tibet. The line commences at Mount Gipmochi, on the Bhutan frontier, and follows the above-mentioned water-parting to the point where it meets Nipal territory [sic].”

Bhutan has a solid 1998 agreement that the boundary will be finalized and till then status quo but Chinese ignore it as for UNCLOS ITLOS award on SCS. The Chinese have claims on a strategic sliver of land West of the Zhamperi Ridge (see map) with spreading it maps in red, which has a Royal Bhutan Army post and China wants to get close to strategic Siliguri Chicken Neck of India where the roads and trains to North East play, and ignores tri junction at Batang La around 9 km to the North and Chinese Bhutan Border is along the ridge moving West from Batang La is clear. But good propaganda and media can make perceptions change and even BJP is learning. 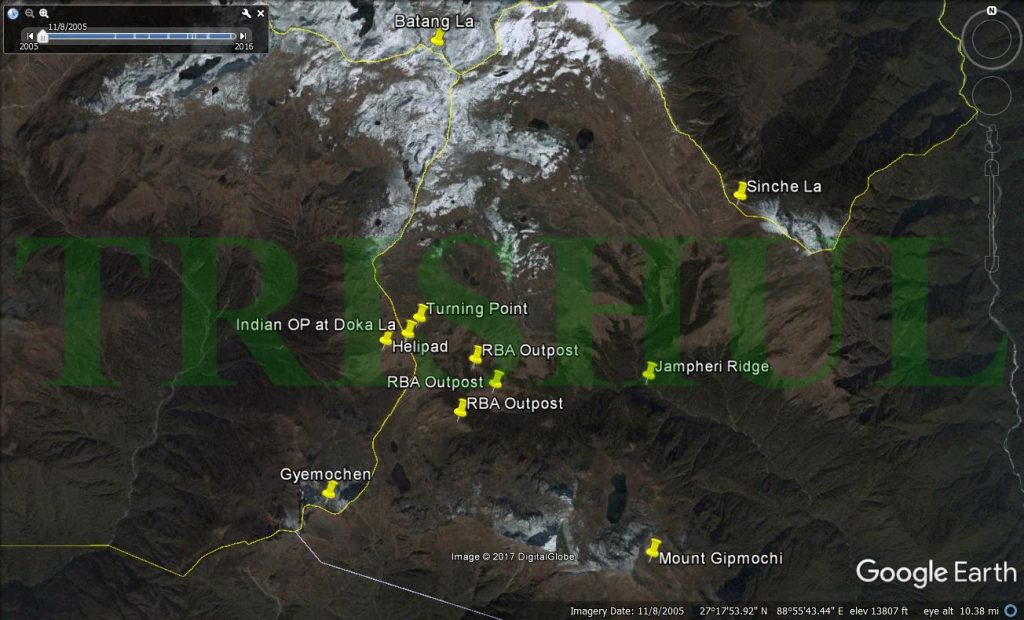 The bilateral relations between tiny Bhutan and India have been traditionally close and share a special relationship making Bhutan its protected state not a protectorate for Bhutan’s foreign policy, defence and commerce with India’s “Economic stimulus package”. India operates 3 hydro projects, of 1,416 MW and expanding in Bhutan and under the 8th Aug 1949 and 2012 seminal agreements. China ignored Bhutan’s demarches on intrusion as it wants Bhutan to open diplomatic missions. India and Bhutan co-operated and also were the only close nations which did not attend BRI meet last month in Beijing. China looks to Tribute not refusals by smaller states as the Middle Kingdom as a big brother neighbour using its economic and military power, as in CPEC. India is the only nation in the East that can challenge it. Hence USA looks to closeness which Irks China and object to India’s Naval exercises like SIMBEX and Malabar and bonds with Japan as the Quad lined against China. As per the agreement between the Special Representatives of India and China in 2012, the two sides have to maintain the status quo until their competing claims are resolved in consultation with the third party, Bhutan. Gymochen Mt Gimpochi is 20 km as the crow flies from the West Bengal border so this needs noting on the map.

India is clear the trijunction is at Batang via Merug La and Sinche La to the Amo Chu river which Pandit Nehru took from Nathu La when he went to Bhutan from Sikkim. The line turns southward, and runs along the Amo Chu. There is a ridge line that runs east/southeast towards/along the Amo Chu river. This ridge is called the Jhampheri ridge and Chinese claim troops have crossed it. See Map.

Indians have also moved down earthmoving machinery with an aim to undo the work to be done by the Chinese. These dozers were highlighted in the pictures that the Chinese Foreign Ministry released on 29th June with its view.

This standoff has the world guessing who will blink first as Chinese refuse to vacate the ingress they have made, by trying to make a metal road to the Turning Point bang opposite India’s Doka LA post having crept in stealthily over few years. Indian Army saw it happening from Yadong in Tibet and may have over looked as troops do not know much about borders legality as in 1962 about Thagla Ridge and nala below. The Rajputs were routed and war began. Few survivors of Rajput ran away as stragglers and Lt Gen Ravi Ipe then a Lt related his experience as Chinese were Korean battle hardened and had Flame thowrers they employed on Indian bunkers and were well kitted and many books tell the tale and also sited above.

Delhi then had said the Nala and Thagla was India’s but this time as RM Jaitley has said India is not as in 1962 and that is true of Indian Armed Forces and they would be greater power if India had joint Commanders and AIR-LAND and SEA-AIR battle strategies instead of 16 C-IN-Cs China knows and worries.

Bhutan has no diplomatic relations with China so like the UNCLOS –ITLOS resolution on South China Seas Chinese paid no heed to Bhutan’s cries. Agreements of 1914 and three more later mean little to the Chinese as they think they have the money and the barrel of the gun. The Chinese want to move South and claim the climbs of the Strategic Jhamperi Ridge of Bhutan with the Royal Bhutanese army post and Indian training troops, by getting closer to the Siliguri Chicken’s Neck of India and one can see the lights some 30 km away on a clear day from Doka La. IDF will follow the CATCH 22.

Previous Post: 10TH JULY 2017 EX MALABAR WITH 15 NAVAL COMBATANTS AND 120 AIRCRAFT & HELICOPTERS WITH INTEROPERABILITY IS A SHOW OF SOLIDARITY TOWARDS CHINA WHEN PLA(ARMY) AND INDIAN ARMY UNITS ARE LOCKED IN EYE BALLS IN DOKLAM WITH REVERSED RIFLES FOR THE TIME BEING
Next Post: CHINA’S PLA (NAVY) IS EXPANDING WITH BASES AND SHIPS & SYSTEMS TO CHALLENGE US NAVY IN THE INDO-PACIFIC WITH AN ANTI ACCESS (AAD) STRATEGY & LEGS INTO INDIA’S INDIAN OCEAN—- INDIA’S NAVY NEEDS A FILLIP IN INNOVATION AND NOT REST ON LAURELS