Indians think Delhi is the centre of the earth with the fastest growing economy and a magnet for FDI. Leaders come visiting to sell to the largest population in the world (if a census is taken). That worries China as former President Nasheed seems to convey from Maldives in the Indian Ocean and a turf war is in progress between navies.

Leaders meet PM Narendra Modi, his BJP Ministers, NSA Doval and Amit Shah who is sweeping BJP to power (like Dave Bannon for Trump) with support of the people. Many are shifting to BJP for ‘Ache Din’, but RSS and Hindutva on the fringe do get away with law in their hands, is a worry. Corruption has reduced. This is India’s time if it can grasp it. “Indians are living in interesting times’. 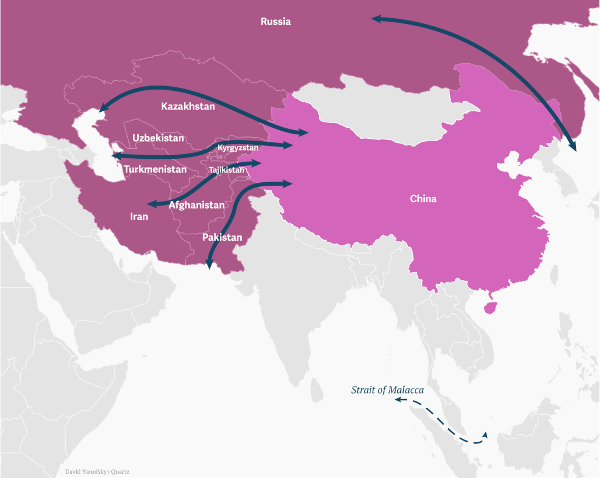 The week witnessed cross border firings and two mutilations ( last in Nov 2016) from Pakistan where PM Nawaz Sharrif’s position is tenuous as he tried to take on his disruptive Army. The state of law and order has deteriorated in the Kashmir Valley thanks to Pakistan’s support with stone pelting against forces and increased bank robberies. The Army is called in.

IDF has gleaned lessons from disruptive style of authoritative leaders of the world who are succeeding in India too and it is best people adjust. PM Modi and CM Adityanath styles as economy is booming ?

Erdogan arrested and disrupted 2000, and asked India to rein in supporters of Gullen in USA. Disruptive Kim Jong Un is brazen and has threatened USA.

Disruptive Mujahedeen Warlord Gulabudin Hekmatyar who approached India in 1988 for friendship and power, was spurned. He is back in Kabul and IDF will watch him. 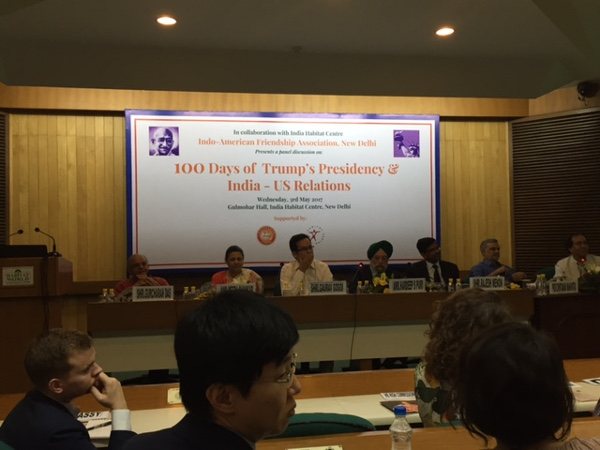 PM Modi is succeeding in India too by extraditing renegades abroad, solving NPAs with an Ordnance and taming the opposition and opening old cases. It is a message that Pakistan better heed his warnings as he means what he says-DEMONET and UP elections showed it, and now GST is on its way with hundreds of development programmes and POK designs that PMO keep tracks of, if terror continues. Saffron tikka and scarf show on TV as the power.

Seminars galore and news/discussions/twitter and electronic media continue with no rules of courteous or analytical TV debates and IDF relies on the proceedings.

Talk shows, sports and current affairs are not allowed on Private Radio like in other democracies, so TV is flourishing with Advertisements to fund them and most are owned with vested interests. On Indian TV Pakistani invitees hurl expletives at each other and bray for hostilities especially after two soldiers were mutilated on Indian soil on the LOC on 2nd May and the nation wanted retribution A Joint Operational Doctrine was issued.
Army Chief Gen Bipin Rawat released the USI Strategic Yearbook 2017 on 4th May at USI with 30 contributed articles. In bytes like Vice Chief Gen Sarath Chandra, Rawat hinted that action will be taken at time and place of our choosing. 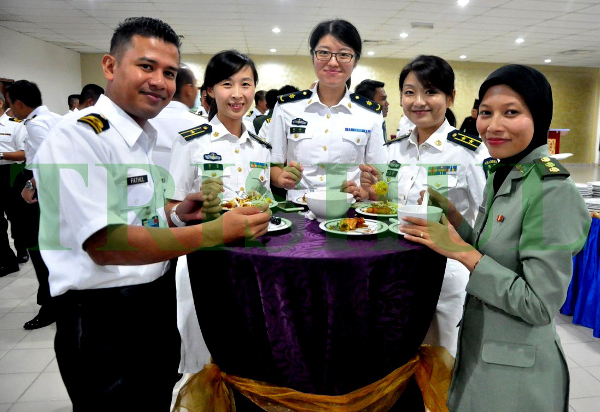 3000 Army and Police marched in to the Shopian area of the Kashmir valley the hot bed of separatists in Kashmir and Hurriyat leaders, to clear terrorists. Geelani the Hurriyat leader accused PM Modi unleashing the dance of death, and saying Kashmir was rich, but starved, replying PM Modi who rightly wants development in Kashmir and met Governor NN Vohra as PDP-BJP appear at logger heads. 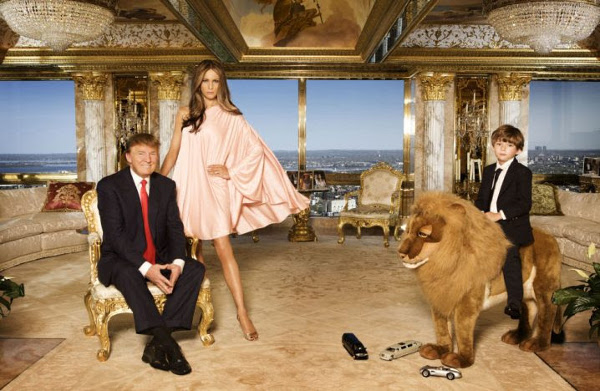 On 4th May well known retired experts in the field of Economy, Foreign Policy, Politics and Academia discussed 100 days of President Trump at IHC arranged by Ambassador Surendra Kumar’S Indo-American Friendship Association (IAFA) in his imitable style of putting two questions to each speaker and a lady rang a bell after 12 minutes. He has a piece in Mail Today on 6th May praising PM Modi for his 1000 days aptly titled ‘Lets Rein in Vigilantism’ echoing IDF.

At a Conference in TOKYO Japanese Vice Minister Akiyama in the Chair stated his most difficult job was to make the Japanese delegates talk for their allotted time, and make the Indian speakers to stop talking. .

At IHC on 100 Days of Trump, JNU Prof Chintamani Mahapatra spoke of Trump as a clever politician and explained his disruptive way of leadership which businessmen follow to keep ahead. He said Trump is trying to run USA like a corporation. This reminded IDF of late PM Lee Kuan Yew. Results awaited !

Rajesh Menon Dy Director CII lamented the reduction of H1BI visas, listed the many disputes in investments and pharma and IT and Intellectual Property. Novelist Gurcharan Das said reduction of H1 B1 visas was a boon for India and spoke of his pet subject Dharma/ Mahabharat / GIta he can regale, and explained why Dave Bannon was sidelined by Trump in favour of his son in law Kushner. Gurcharan feels 30, 000 NRIs will come back and open start ups or do back office work for USA in India.

Amb Hardeep Singh BJP spoke of his work in UN and the nuclear deal and asked what have we offered Trump but did not give cogent answers that IDF got next day from the China’s Ambassador to India and Amb Meera Shankar who gave sane advice and said Trump has done nothing to change for India and we must have patience and connect with the Trump family and offer how we can help.

Young articulate Congress MP Gaurav Gogoi warned, BJP is getting in to USA’s security trap and hinted it was not good and explained how we have been sucked in to the South China Sea dispute by President Obama 2015. IDF feels this may be a price to get US technology but strategic partnership rules have not come about, so its elusive.

Trump is the impetuous leader who is shaping opinions and making statements that are not being liked by sections of USA and this was in initial days of PM Modi as 2002 riots were fresh but no more. That chapter is closed. 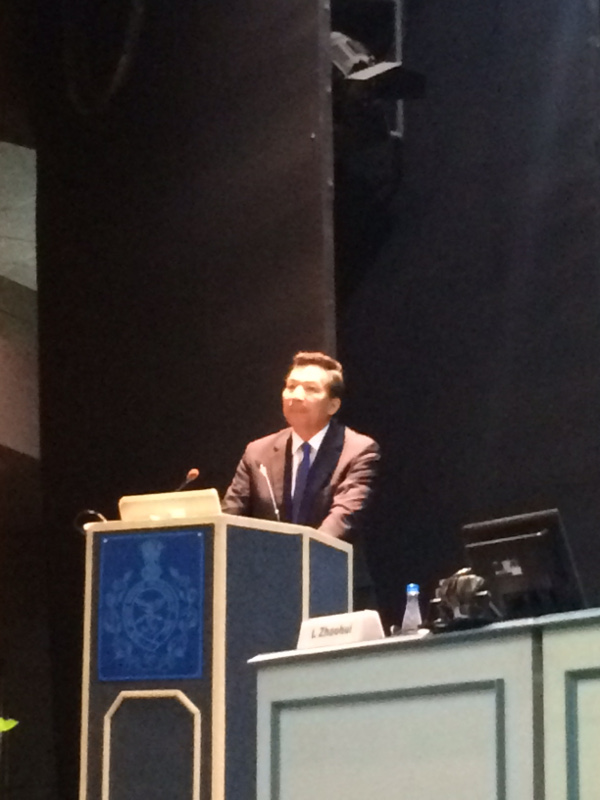 On 6th May HE Lou Zhaohui China’s Ambassador ( wife Wang Li is Phd from Indian University ) spent 20 minutes on historic relations and spoke at length for nearly 2 hours at USI. Chinese can wear out opponents. He confessed Indians look to tomorrow, China looks long and can help as India’s bureaucracy which cannot keep up with Leaders aspirations. He said States (PRADESHES) want to move with demands.

Amb K Sibal in the Chair said Lou was Ambassador to Pakistan and did not know if it was a good thing and raised the whole gamut of India-China Relations, which Amb Lou made clear in Q & A and not earlier, and said he contributed to the cooling of relations after 26/11 in Pakistan so he is well informed on the sub-continent and said he had traveled to Qatar too.

Amb Lou made a pitch for India to increase its GDP and Infrastructure with China’s help telling India your GDP is what China was in 2004. On NSG he said India must be included after rules were formed for nations hinting on Pakistan. On GWADAR he gave the line IDF has heard. “ Pakistan asked us to build the port and we did. Singapore ran it for 5 years and left so they asked us and now we have to do business”. But the biggest pitch was for India to join OBOR/CPEC and BRI that UN subscribes to and on 14th May Xi Jinping holds the big BRI summit in Beijing. Who will attend from India ? Or will it be disruptive ? Shan No Varuna .

the m n March 17, the United Nations Security Council adopted a resolution on security in Afghanistan. It includes a reference to regional development initiatives such as China’s Belt and Road Initiative (BRI). China promptly announced that this reference (possibly inserted at its instance) reflected a global consensus on the BRI. This is part of an intensifying campaign to mobilise high-level attendance at a summit — the Belt and Road Forum for International Cooperation (BRF) — being hosted by China in mid-May. The declared purpose is to review progress of the BRI, obtain perspectives of stakeholders and plan new trajectories of cooperation.edia who are still smarting from Trump’s route to presidency.

Previous Post: “IS A PERMAMENT DEFENCE MINISTER ESSENTIAL” IS ON MILITARY MINDS & WHO WILL BE APPOINTED — AN RSS RECOMMENDATION AS RRM ONCOLOGIST DR BHAMRE ? OR RM JAITLEY CONTINUE AND RESPOND TO PAKISTAN ?
Next Post: CHINA CHALLENGES GROTIUS’S ‘MARE LIBERUM’-(FREEDOM OF THE SEAS) WITH ‘MARE CLOSUM’ AND SCS CLAIMS— WILL WE SEE COLD WAR 2.0 BETWEEN US ALLIES & INDIA VS CHINA-RUSSIA & PAKISTAN & TRIBUTEES AT BARF 14/15TH MAY IN BEIJING ?