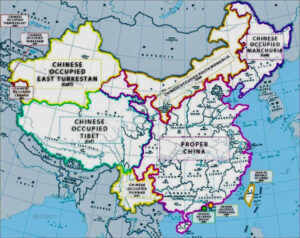 A war over the South China Seas(SCS) with China will be catastrophic and that realization has come to the West, which hoped ASEAN would deal with China with a COC but the horse has bolted. Now the West is pursuing QUAD, and legal/economic actions against China’s aggressiveness with WHO’s support. On Ladakh’s resolution China is biding time and building up assets along the friction points including Nathu La.

ON 1ST JULY CHINA TELEVISED Xi Jinping’s 100th Anniversary of the Chinese Communist Party(CCP) speech in contrived English. Xi, had his countrymen USA, Taiwan QUAD and India in mind. ‘Xi warned the world’ and told the Chinese people to build a modern socialist country, and vowed to “crush” external forces who try to meddle in the country’s internal affairs (Xinjiang, South China Seas, LAC and BRI), and smash any push for independence on Taiwan.

Xi hailed Marxism with Chinese characteristics for the country to become the world’s second largest economy. Majority Chinese have seen an uptick in their standard of living and have faith in Xi Jinping’s ambitions for China and suffer consequences as gamblers, they are.

President XI heads the CCP(unlike India’s BJP with RSS) and the Central Military Commission(CMC) and is C-in-C of China’s military and a reorganized Chinese military and keeps repeating, “be ready for war”. China’s technocrat leaders take strategic decisions when China is threatened(along Taiwan, South China Sea, LAC and Bhutan) helped by pro-active Public/State Security Intelligence like RAW and NSA are supposed to offer India’s strategy. Tactics is left to the military commanders. When the military is not ready it says so, like Gen Sam Manekshaw reported to PM Mrs Gandhi in April 1971. Chinese military is allowed time like Mrs Gandhi gave.

Patience is a Chinaman’s virtue as emotion is an Indian’s. This possibly explains what happened after India removed Article 370 in August 2019 and China began planning the Ladakh incursion which became a confrontation after Colonel Babu was killed at Galwan(15th June, 20). Earlier fisticuffs on patrols were glossed over. 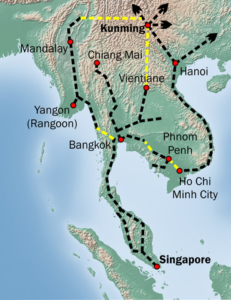 Chinese children too, play Weiqi (GO), a board game when white and black stones are moved on a 19X19 inch gridded board with strategic moves, even over days. The game ends in victory when the opponent’s stones are eliminated or surrounded, hence the term String of Pearls to surround! Chinese have a ‘Kaisu’ attitude (never lose face and win in this life at any cost). Pandit Nehru at first Asian Games in New Delhi said winning is not as important as taking part ! Not for the Chinese—-Its winning, and religious sentiments do not play a part in a Chinaman’s life as severely as in an Indian’s life for Moksha.

Indians excel at Chess’ which is a game of reactive moves to ‘Check mate’ the opponent or draw. Not in Weiqi. Kissinger discussed this with this writer in Oberoi Hotel over coffee in the 1990s. In his book, on China Kissinger writes chess is ingrained in those who direct India’s foreign policy’ in absence of strategy directions, and Indian diplomats were obligated to ‘Non Alignment’, even if they were not convinced. It was a phenomenon of the cold war. National interests should drive policies and PM Modi has pushed that well but mixes elections and religion with national interests and is putting Lee Kuan Yew’s theory not to mix both to test.

Russia is under sanctions and supports China, Iran and Syria. This political scenario has made President Biden mellow on Russia with Putin for arms control and climate change. Biden realizes USA’s Middle East military confrontations have failed at cost and unwinnable with China. It’s a bi-polar world.

CHINA’S MILITARY IS BEEFING UP WITH A STRONG WILL

Militarily China has a larger Navy than USA and has beefed its Army and Air Force in Ladakh with S-400 AA missiles and is aiding Pakistan which is preparing to hold elections in POK area of Gilgit Baltistan on 25th July where the CPEC has projects. Pakistan has moved in Brigades and Chinese supplied HQ air defences, though the Dusa dam, China is building is being objected to by locals and Chinese workers were killed.

Chinese military is biding time to take Taiwan, and has constructed powerful amphibious ships like the latest Type 75 (see photo) after Type 73. Amphibious warfare has been given priority. India has yet to develop an Amphibious Warfare School that the Navy planned at Kakinada due to inter-service disagreement that CDS should have resolved. 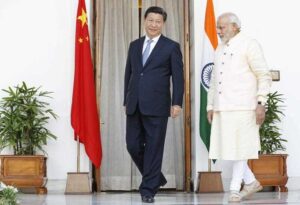 On 4 to 6th May US Naval War College (CMSI) conducted an unclassified conference with 150 US experts on a PLA amphibious war for a Taiwan invasion. China has a strategy for unification with Taiwan. The military component is subordinate. Xi and the CCP seek to resolve the “Taiwan problem” with “reunification.” The leadership prefers long-term non-war means as Sun Tzu advocated, with military threats, economic, and political coercion. Chinese PLA(N)warships sail through the Taiwan Straits and PLA(Air Force) operate in the ADIZ and China carries out missile firings near Taiwan.

Senator Joe Manchin a moderate Democrat voiced concern about President Biden’s $3.5 trillion plan for USA’s neglected infrastructure which could hurt USA’s economy. China is sitting pretty having built superior infrastructure. India direly needs infrastructure and PM Modi and Minister Gadkari are trying but resources is the challenge. Biden has pruned USA’s plan by half, appreciating the dangers to US economy in COVID and Cyber times. President Biden is in over drive to sue CCP for damages due to its spread of Covid-19 and WHO admits errors in its earlier report on China.

Americans could recover Trillions in damages from Lawsuits over China’s cover up of the origins of the pandemic, like Cairn wants from India, as the pandemic has caused four million deaths worldwide including over 600,000 in the United States, by a leak from the Wuhan Institute of Virology (WIV). IDF reported this on this site in 2020 as reported by Epoch Times. 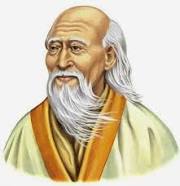 This crime against humanity and gross criminal negligence will need to be proved. Americans can take the CCP to court in the United States to seek compensation for losses suffered and lawyer Rickards estimates that $3 trillion to $4 trillion in damages could be awarded to Americans in lawsuits against the regime. China on the other hand is trying to cripple the Dollar economy domination by USA and attempting to make the Yuan a freely convertible currency and use crypto currency to hurt US economy. Money makes the Mayor go and its always the Economy, that Matters Warren Buffet admits.

Another challenge in Asia is the unstable state of a civil war in Afghanistan. Chinese say, “May you live in interesting times”. India is certainly living in interesting times and PM Modi has to attend to India’s challenges. IDF recommends a dose of the successful 1991 reforms by PM Narasimha Rao, Secretary Montek Ahluwalia and PM’s Secretary AN Verma supported by the opposition. IDF was a witness from Singapore where it all began. . SHAN NA VARUNA.

Previous Post: CHINA HAS BECOME WORLD’S FRANKENSTEIN & FRIEDMAN DEBATES IS CHINA WINNING OVER USA WITH ITS INFRASTRUCTURE & POLITICAL STABILITY & IDF ASKS WITH 5G CURRENCY GAME & HARD POWER
Next Post: USA’S POLE POSITION IS BEING CHALLENGED BY CHINA’S ASCENDANCY AS TALIBAN 2.0 RETURNS WITH PLANS FOR A PENTAD TO TAKE ON THE QUAD—————————-QUO VADIS INDIA ?