COSC writes it is pitched at the strategic level and is unclassified for planners and it includes civil military relations and MOD as enablers. Military-Politco co-operation can enable more than systems currently in force calling separate services Integrated HQs and no theatre commands. No tactical matters are even hinted.

IDF posts this when on 1st May Subedar Paramjeet Singh 22 Sikh and a BSF constable at a border post were mutilated 200 meters inside India’s boundary under cover fire with Pakistan near Krishnaghatti (calls working boundary). As usual it is denied by Pakistan Army just after their COAS Gen Khajwa Bajwa visited LOC. Every time Pak Army Chief visits LOC some action takes place, and he must have demanded it providing cover fire in forested area. BSF is responsible for the IBL and dual command is seen on that boundary and Army should move up in Jammu is IDF thought.

JIAFDD defines and amplifies National Interests and values over the Constitution and does provide for the first time a semblance of a visionary direction for planning contingencies and assist in drawing up War Plans in a joint manner, earlier attended to by each service, superseding the sketchy doctrine issued eight years ago. It guides Chief’s and MOD to approach everything with a blend of aggressiveness and political resilience and maturity from internal security, counter-insurgency war and nuclear war.

Bhagwad Gita , Kautilya, Clausewitch, others and Lt Gen VR Raghavan (Retd) are quoted. “The existing State-centred approach to National Security, confined to the defence of a country against territorial aggression, has been widened to the idea of Security inclusive of a larger set of threats to the people of the State” –

Nuclear contingencies and war’s operational deployment are always classified and ambiguous in India’s case. Ex RM Parrikar did, raise the efficacy of No First Use (NFU) in public; later said it was a private thought, but Service Chiefs and Operational leaders must be clear on Rules of Nuclear Engagement(ROE).

India’s Football of codes to release nuclear weapons rests with the PM and NSA, while the Strategic Force Commander (SFC) has the responsibility for assets and DRDO for triggers. 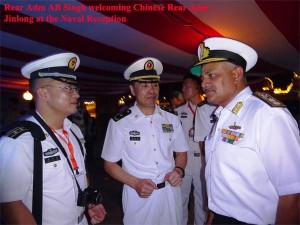 Doctrines are taught with an aim to coherently deal with all possible security threats (especially those facing India) including challenges of conventional, nuclear and proxy wars and HADR. A joint doctrine brings in synergy among the Army, Navy and Air Force for jointly exploiting weaponry and assets. BJP Government, has the lessons of the Kargil half war (1999) which came suddenly, when Gen VP Malik said we will fight with what we have.

India is no more an apologetic, ‘Non Violent’ nation but a peace loving nuclear capable nation. This alone has changed the mind set of the world, and Navy issued a meaty Maritime Doctrine and Military Strategy even before its first SSBN INS Arihant became operational with K-15/B-05 nuclear missiles.

SURGICAL STRIKES- 2016 A HARBINGER TO JIAFDD ?

Triggered by the four militants brazen attack at a Uri camp on 19th Sept , where 19 soldiers were killed Army Special forces stealthily carried out successful surgical military strikes across the border that shook Pakistan and surprised the world. Foreign media blared, “On 29th September, 2016, a military confrontation between India and Pakistan began. India said that it had conducted ‘surgical strikes’ against militant launch pads across the Line of Control in Pakistani-administered Azad Kashmir and inflicted significant casualties”.

‘Military confrontation’ made strategists discuss whether such an action of transgression could lead to war between India and Pakistan which were earlier listed as Red Lines of Pakistan. IDF sees this also a polite message to China to respect the Line of Peace and Tranquility, with no transgressions.

INDIA’S Non Alignment policy has faded and Strategic Interests are coming to the fore, with a strong economy and looking to alignments in the neighborhood. Nations like Bangla Desh, Myanmar and Vietnam have been offered Security agreements and exports on credit. Island territories in the IOR are helped by India’s Navy to ensure security to the extent each desires.

The surgical strike showed that the top leadership which appears incorruptible has confidence in its military, and are erasing an indelible fact of India’s 70 years when corruption had penetrated in to Indians’ DNA, and money was made in “Off shore Defence deals”, ( Bofors, HDW, AW-101) never proved depilating India’s Armed Forces.

USA has maintained pre-emptive strikes in Iraq, Afghanistan, Libya and Syria as legal. Recently, President Trump has said he can attack North Korea’s nuclear establishments to defend US interests. Israel has executed attacks more than once, and recently Israeli F-16s attacked Damascus from the air and claimed it was to destroy a Hamas ammunition storage.

Art 51 of the UN Charter defines Self defence obliquely permitting pre emptive strikes. Pakistan’s terror attacks could be treated as armed attacks on India. Self defence action in Indian Pak Occupied Kashmir is a thought only for contingency planners; as OP Parkaram took many by surprise and later led to many deaths in Army’s mine clearing ops. UN has avoided interference in many cases. 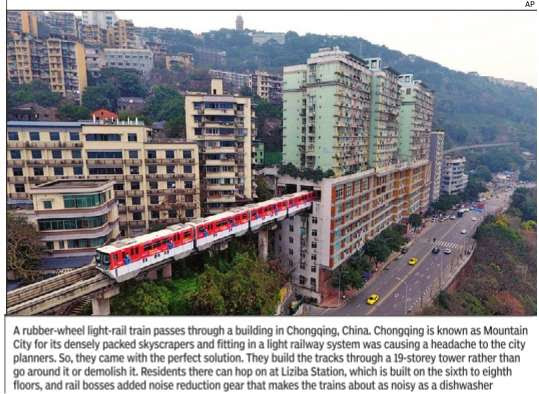 China’s CPEC runs through the area of Indian Kashmir that Pakistan occupies and calls Azad Kashmir, and has Chinese thinking. Pakistan issued a notification to make Gilgit and Baltistan the 5th Province of Pakistan.

PM Modi has also made policy statements, calling for territorial consolidation, which could imply military involvement. 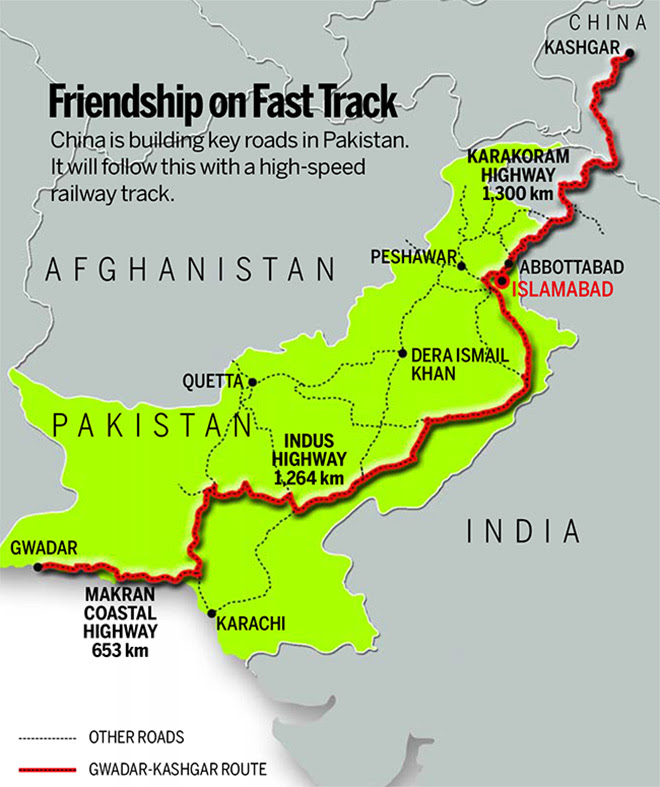 PM Modi has also made policy statements, calling for territorial consolidation, which could imply military involvement and warned China CPECis on India soil.

On 15th August, 2015 from the Red Fort, PM Modi asserted Pakistan’s occupation of Indian Kashmir(13,297 sq km some which they call POK) is India’s and covets it legally. It sounded like a bugle which would need support as 2.000 sq km Shaksgam valley was illegally ceded to China in the Sino-Pakistan Frontier Agreement 1963.

A container train with goods journeyed from London’s Gateway terminal to Yiwu in China on 28th April in 18 days ! Quite an achievement which will be touted on 14th May OBOR meeting in Beijing with world leaders. India may only send low level representatives to mark objections to CPEC, which China will seek to involve Nepal and Afghanistan. India is likely to see inauguration of cranes in the Chah Bahar berth and is India’s answer to CPEC and Gwadar.

With Pakistan in desperation there is no traction on Ex Cdr Jadhav on death row and terror tactics even mutilating soldiers, showing Red rags to India . Pakistan’s lies on its terror and claims with gaps, about Jadhav spying are on TV U Tubes below and defended by Gen Saighal.
https://www.youtube.com/watch?v=GRiEYaAKrA4

The month long Tri-Service Ex TROPEX- ( a show of joint force next to Pakistan), must have included high level Joint planning and jointness like it must have gone in to planning surgical strikes. It must have given vision to PM and could have been discussed in the day long Commanders Conference at IMA in Dehra Dun, where PM Modi asked for a proposal for Theatre Commands, it is reported. Absolutely the right progression for a Joint Doctrine to be enacted in Theatres for synergy.

The Joint Operational Doctrine reads , “India has moved to a pro-active and pragmatic philosophy to counter various conflict situations. The response to terror provocations could be in the form of ‘surgical strikes’ and these would be subsumed in the sub-conventional portion of the spectrum of armed conflict.” .
The doctrine proposes joint training of personnel, unified command and control structure besides pushing for a tri-service approach for modernisation of the three forces. All long over due for Tri service synergy called ‘Purple’ in military parlance. 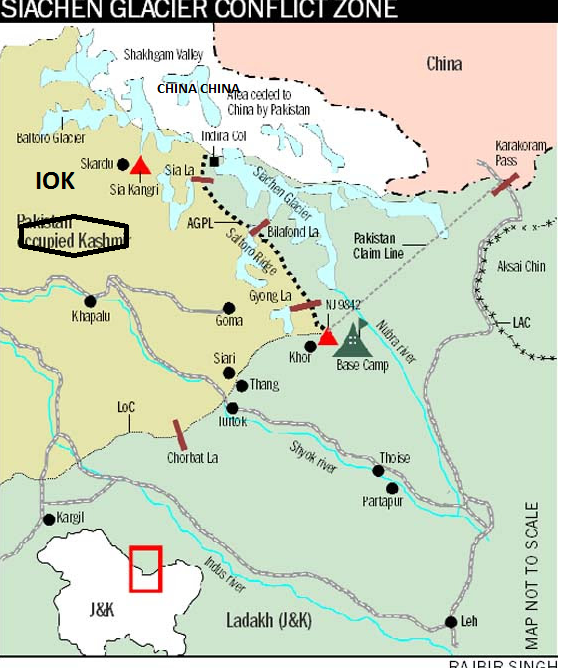 The doctrine talks of the steps initiated for the establishment of the ‘Defence Cyber Agency’, ‘Defence Space Agency’ and ‘Special Operations Division’ and ‘Integrated Theatre Battle’ to ensure decisive victory in a network centric environment across the entire spectrum of conflict in varied geographical domains. Shan No Varuna.

Previous Post: FM JAITLEY RETURNS –PARRIKAR SAYS BYE TO MOD WITH NO LEGROOM FUNDS UNLESS FM OPENS HIS PURSE & ISSUES STRATEGIC PARTNERSHIP RULES WITH ORDERS TO PRIVATE FIRMS FOR FDI OR SAY ‘HEY PRABHU’ AND DEPART !
Next Post: “IS A PERMAMENT DEFENCE MINISTER ESSENTIAL” IS ON MILITARY MINDS & WHO WILL BE APPOINTED — AN RSS RECOMMENDATION AS RRM ONCOLOGIST DR BHAMRE ? OR RM JAITLEY CONTINUE AND RESPOND TO PAKISTAN ?