This is an IDF analysis of the Defence Budget 2022-23 which includes the  Full revenue allocation as inescapable, 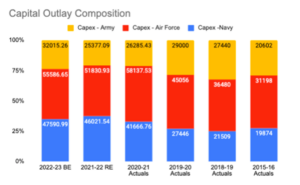 and this year has  a need based Capital Allocations on the Adage, “Government is giving you what you can digest, and will give more if you need”.  Former Defence Minister Shrimati Sitharaman  possibly had this in formulation of the 4th successive BJP Budget she eloquently presented in Parliament on 1st February, whilst sipping coconut juice and electoral. Her hair has greyed.

Last year Defence Budget was Rs 48.7Lac Crores. This year its Rs 5,25166.15Lac Crores(Appx $ 61 billion), around 2.1 % of the estimated lower GDP of around $ 2.7 Trillion reduced due to Covid with an accent, on naval spending. The Defence Committee has recommended a steady increase to 3 %.

The Capital budget is Rs 1.52Lac Crore, the Revenue budget is Rs Rs 2.33Lac Crore and Pensions Rs 1.13Lac Crore. The defence budget has set aside  Rs 3,810 Crore for the seven new Ordnance Corporations—of which Rs 2,500 Crore is  emergency authorisations and Rs 1,130 Crore is to handhold them in the initial years. The Ministry of Defence(MOD) gets  Rs 20,100 Crore and allocations to DRDO of around Rs 31000 crores adds up to make Rs 5.25Lac Crore from estimates IDF attaches.

India’s Defence budget is around 16% of the Government’s expenditure, but the Government is optimistic that India is back on a growth path, and revised estimates if needed will be provided as in the past. The government’s push for indigenisation is also evident.

The inking of the $ 355 Billion deal to export the Brahmos missiles for the Philippines Navy’s Marines to guard its waters, as India’s largest defence export order was announced just before the budget. It has the underpinnings of more exports which will boost exporting defence companies and Public Sector Defence manufacturers’ bottom lines. The $ 5 Billion Brahmos Aerospace Ltd is owned by DRDO, where Russia is a 49% partner.

The total capital outlay of Rs1.52 lakh Crore is a 12.82 per cent increase from the capital budget of Rs 1.35 lac Crore allocated in 2021-22. In the previous year, the Navy’s capital budget was Rs 33,253.55 Crore, but its revised estimates were hiked to Rs 46,021.54 Crore, given Navy’s high pace of spending and cost overruns due to Covid and on building of ships like INS Vishakapatnam, Scorpene submarines and the aircraft carrier Vikrant in India to be commissioned on 15th August. It needs noting the Navy had a total expenditure of Rs 41,666.76 Crore in the last financial year. It had to be increased this year.

The Navy spent the highest of its capital funds at around 90 per cent last year and this year’s budget lays emphasis on naval spending to enhance India’s capabilities in the Indian Ocean Region (IOR) where the Navy is the Net Security Provider. The spending will beef up India’s overall maritime security facing Pakistan and China. The Navy has got an increase of around 43 per cent in its capital allocation at Rs 47,590.99 Crore which includes building of 41 ships on order(listed later by IDF in next post) and modernisation of platforms and completion of the shore base at Karwar (Project Seabird Part II) and a large submarine and naval task force base Varsha at Romboli South of Vishakhapatnam, to de-congest it. The submarine base has deep water berthing facilities, and is being steered by the Navy in Project ATV for India’s nuclear submarine building with L&T in a PPP and DRDO, and special budgets. 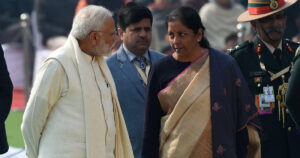 The Army’s capital budget has been cut from the Rs 36,481 Crore allocated last year, as the Army had spent only around half of its budgetary estimates. The Indian Army’s capital budget has gone down by 12.2 per cent to Rs 32,102 Crore from Rs 36,481.90 Crore in the last fiscal, as it would seem after the Doklam and Ladakh incursions by PLA in 2017 and 2020 respectively, the Army saw large expenses on filling up deficiencies and supply of variety of 155mm guns, but not wheeled, tanks and ammunition and has beefed up infrastructure on the borders with highest roads in the world. Additional 200 Vajra-K9 155mm guns from Kanwa Korea have been ordered on L&T Ltd. The credit must go to the Government, Army and the Border Roads Organisation(BRO) for their alacrity to meet the PLA.  The total capital outlay for the Armed Forces of Rs1.52 lakh Crore has 12.82% increase from the capital budget of Rs 1.35 lakh Crore allocated last year and needs lauding.

Last year the IAF used about 70 per cent of its funds. The Indian Air Force has still retained the largest share of the forces’ capital budget at Rs 56,851.55 Crore–an increase of around 4.5% from last year for payment of engines, Rafales, LCAs, SU-30MKIs, 36C-295 Airbus Transport Planes by Tatas, and upgrades of MiG-29 and Mirage and imports.

On revenue expenditure Army accounts for almost 61%, largely due to the manpower pay and allowances of the 1.1 million Army while Navy and Air Force manage with around 40%. Long term measures such as lateral absorption or increasing retirement ages and pensions in some cases, were contemplated by CDS late Gen Bipin Rawat which have yet to see traction, though reduction of Army manpower while ensuring operational needs is on the anvil.

The budget has a push for maximising purchase of indigenous military equipment with Atamnirbharta with strict non-deviation norms, which has resulted in the Armed Forces spending 64% of their capital outlay for RE 2021-22 on indigenous purchases and a target of around 68% is for this year.

The Army, spent around 72% capital funds on indigenous purchases, but its utilisation of funds was proportionately less efficient compared to the Air Force and the Navy. Among them, the Navy’s indigenous ledger stood at about 65.9%, while the Air Force was the lowest at 59.2%. There are some imports like modern fighters like SU-30MKI and Rafales, aero-engines and powerful weapon systems which are essential for the Air Force and even the LCA still has 47% import content. Navy imports ships engines and some weapon and radar systems for platforms it builds in India and is a saving grace.

Defence Manufacturers and MSMES look to benefit from the budget as it earmarks 68% of the industrial Capex for local companies in the annual budget. The gainers could include Larsen & Toubro Ltd, Bharat Forge Ltd, and Paras Defence and Space Technologies Ltd. The drone startups like Zeus Numerix, New Space India Ltd, and BotLab Dynamics that flew 1000 drones for the Beating the Retreat on 29th January over Rajpath could gain.

Finance Minister said defence research and development will be opened up for the private industry, start-ups and academia. And 25 per cent of the defence R&D budget is earmarked for the purpose. Under this budget, the private industry will be encouraged to take up the design and development of military platforms and equipment in collaboration with the DRDO and other organisations through a special purpose vehicle (SPV) model. The budget also announced the setting up of an independent nodal umbrella body for meeting wide-ranging testing and certification requirements. She said the government is committed to reducing imports and promoting Atmanirbharta or self-reliance in equipment for the Armed Forces.

In conclusion the Government has realised geography is an irreducible reality for India and it must be taken into account to shape India’s National Security Strategy(NSS). China has a large Navy but China is weak in the IOR maritime domain at choke points where the Indian Navy is strong. On the land borders of India, China has the geographical advantage and this year’s Defence budget has generally been balanced for that. Also, Army is goaded to improve the ordering and induction cycle. The MOD delegation of small funds to Vice Chiefs Rs500 Crores and C-in-Cs can be used, like Navy has done for operational improvements and become a Builder’s Navy with purchase of designs and then get Indian talent to modify and improve them, and get IPR help from Private Indian Software firms. India’s 1823 Official Secrets Act left by the British hinders Army more to exchange data and specifications.

Previous Post: NAVY’S 21st CENTURY MISSILE STRATEGY– THANKS TO THE ABORTED BRASSTACK’S WAR GAME AGAINST PAKISTAN(RED) IN 1986—ITS TIME FOR EXERCISE BRASSBOARD ON THE TWO FRONT SCENARIO—–IDF EXPLAINS
Next Post: CHINA & RUSSIA ARE CO-OPERATING AGAINST USA & BIDEN IS SET TO BREAK INDIA’S TIES WITH RUSSIA WITH CAATSA UNMINDFUL THAT RUSSIA IS OUR DEFENCE & NUCLEAR LIFE LINE & USA ALSO LOOKS TO A MARITIME BASE IN INDIA WITH PROMISES —-IS INDIA IN CATCH 22 ??