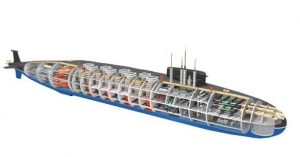 IDF offers an explanation of the Naval component of India’s Triad, which Prime Minister Narendra Modi proudly announced when he received INS Arihant on the 5th of November, 2018 at Vishakhapatnam. CNS Sunil Lanba and Vadm Retd PS Cheema Ex SFC are seen in the picture as the Captain presented a ship’s cap to PM who wanted to tell the world India’s triad was operational and neighbours not to blackmail India.

To prove India’s air, land and sea based deterrent and second strike capability, ‘In India’s No First Use’ policy the PMO and SFC would have discerned possible targets and listed them for each service’s to make their war plans and updated the War Book for support in their de-mated triad state for swift mating the bombs and missiles. SFC must have carried out trials table top exercises with the Nuclear Command Authority under NSA’s directions with a retired Navy Admiral in NSCS helping who was SFC and with NSA Menon traveled to sites.

Service top brass sworn to secrecy will be aware of all the above procedures and safety drills and must have practiced mating with DRDO operatives with dummy or real cores taken to sites from DAE and BARC swiftly to execute in a pre war scenario. This writer saw dummy drills in two NATO-Warsaw exercises in Germany in the 1970s, and safety and security was paramount and as an Indian was kept out of the war phase. India has reached that stage of exercises, though in submarines the nuclear missiles have to be mated and kept code locked, so the drill for nuclear submarines will be different. BARC and DAE staff will have to be at site and in Navy’s new submarine base Varsha a big building for DAE is in the plan..
Historically the fighter-bombers were India’s first and only nuclear strike force until 2003. CAS ACM Polly Mehra had disclosed this later about how PM Mrs Indira Gandhi told IAF to practice bombing/toss bombing and become operational for nuclear bomb drops as EMI/EMP was a fear. The first nuclear-capable ballistic missile was fielded in 2004 in Dr Kalam’s IGMP and considerable progress has been made in a flexible no first use posture explained by Ex NSA Amb Shankar Menon , with designated 1st and 7th squadrons of Mirage 2000H and Jaguar IS/IB aircraft against Pakistan and SU-30MKI with IL-78 re-tankers for long range. The Mirage 2000H are undergoing upgrades to extend service life and enhance their capabilities; to Mirage 2000I. In the years ahead the Rafales will be a potent addition. 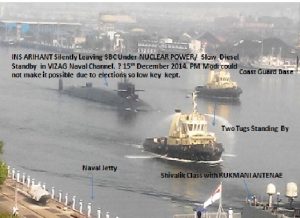 For nuclear land based attack the Indian Army has four types of nuclear-capable ballistic missiles that must be kept operational by SFC and by Commands in their conventional role and include the short-range solid fuel Prithvi-II and Agni-I (1200km), the medium-range Agni-II, and the intermediate-range Agni-III (2500km) both two-stage, solid-fuel, rail-mobile missiles. The Railways must be ready and practiced with rakes to position them. Two other longer-range Agni missiles are under development: the Agni-IV and Agni-V, however details of missile types that India plans to fully develop and keep cores ready from BARC in its arsenal are classified and needs technology development. The Prahar is being reported as a tactical nuclear weapon to deter Pakistan from using tactical nuclear weapons and progress is being made to make nuclear tipped 155mm shells. Nirbhay will be India’s cruise missile like Tomahawk. They are under trials.

Navy went about its deterrent systematically The ship-based ballistic missile was the Dhanush, a 400-kilometer (249-mile) single-stage, liquid-fuel, (despite Navy’s recommendation for solid fuel) short-range ballistic missile designed to launch from the rear decks of Sukanya-class patrol vessels (Subhadraand Suvarna); with two missiles each with L&T help for vertical launchers which CNS Adm Bhagwat pushed and has paid dividends with all future launchers and exports. The Dhanush was a ship-based variant of the Prithvi-II SRBM. 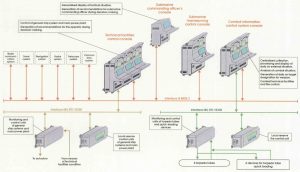 The mandate of the ATV for a nuclear technology vessel as a technology demonstrator which was set up in the 1980s was to build a shore based miniature nuclear reactor S1 and a nuclear submarine S2 later with such a reactor. In a tussle between the Navy which wanted S1 to be set up at Vishakapatnam under naval command, it was DAE that rightly prevailed to set up S1 at Indira Gandhi Atomic Research Centre (IGAR) at Kalapakam under its wings. The S1 prototype reactor became critical on 11th November 2003 and was declared operational on 22nd September 2006 at IGAR in the form of a half submarine built by naval constructors and MDSL. Details were made public in a presentation by the atomic scientist Anil Anand on 30th October, 2013 on BARC’s Founder’s Day who had trained in France on Pressure Water Reactors(PWR) and had steered the project. Later his book released by BARC head Mr Basu who had worked on S1 under Anand gave a better picture.

Indian Navy ’s first indigenous nuclear-powered SSBN, the INS Arihant, was commissioned in August 2016,and was an engineering feat with Soviet help as it ,moved from being a Technology Demonstrator to SSGN to a SSBN, but spent later part of 2017 and early 2018 undergoing repairs after its propulsion system was crippled by accidental water damage but on getting operational it was time to tell the world of an achievement with Navy Day 2018 approaching and no ship commissioned in 2018 and one frigate and three minesweepers decommissioned. Four Survey ships on GRSE, 16 , ASW Craft on GRSE and CSL and two Grigorovich the Krivack follow ons from Yantar in Kalingrad whose hulls are ready and two at Goa Shipyard Ltd have been ordered in November
Navy proved India’s Triad after INS Arihant’s month long deterrent patrol in the Indian Ocean. The nuclear SSBN submarine while underwater simulated readiness to fire 750 km ranged nuclear tipped K-15 missiles (12 can be loaded) on to a designated target. The target co-ordinates were surely provided by the Nuclear Command Authority (NCA) and Strategic Forces Commander(SFC) and the missile release codes by the Prime Minister from a computer which is called a Football under personal control of President in USA. The submarine’s Commanding Officer must have received the data in extra low frequency (ELF) bit rate as an encrypted signal from the trailing French supplied Neredis antennae transmitted from INS Kattaboman’s large antennas . The submarine skipper must have reported readiness to launch to SFC and NSA in Delhi, heralding confidence for India’s second strike capability and submarine must have simulated launch drills.

The message, is that India cannot be black mailed by nuclear neighbors. Dummy runs have been carried out by DRDO and Navy earlier, and under water messages to Kilo and HDW submarines but made public to instill confidence. It is to the credit of India’s 65,000 strong, 134 ship Navy that the operational tempo of the ships, aircraft and submarines to take part in exercises and operations in 2018 was not wanting despite getting only 14% of the paltry $ 42.3 billion in 2018-19 Defence Budget. This should a remove a lot of misconceptions in the minds of many who ask did Arihant fire a missile and what did this announcement mean ? Shan Na Varuna. .