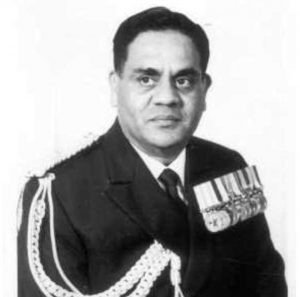 IDF has received several  personal  responses  on  Admiral JG  Nadkarni’s  OBIT, and hence produces a few with his photograph.

Vice Admiral MP Awati former FOC-in-C West that IDF served briefly as COPO now called CSO(Ops),  had a booming voice, a majestic gate and  is   devoted to the Navy even  today and is credited for pushing the Navy’s Round The World Voyages which has earned Navy plaudits,  has this to say, “Podgy’ Nadkarni was my contemporary, he belonged to a rare breed of seamen and leaders of seamen attempting to resurrect a once enviable maritime tradition. I was privileged to have his support when I was struggling to consolidate  my attempt to revive interest in our history at sea.” Warm regards Manohar AwatI.

Cdr Hirak Nag writes, “As a Midshipman on the Delhi I was once made his ‘Doggie’ and remember once displaying my annoyance for him having sent me aft on a small errand and I had displayed my annoyance for being sent on what I thought, was an un-necessary  job. Noting that he sent me again for a small job making me realize,  my fault for questioning a senior officer. He had, thereafter treated me well. He was a fine officer, and a fine Chief”.

Air Cmde TP Srivatsava  comments, “I consider myself fortunate to have met Admiral Nadkarni, but once only, at US club informally sometimes in 2002 . After formal intro, as usual we drifted towards our professional domain and Invariably a BLUE/WHITE interaction finds its way into the AIR POWER domain. I had and still have my views on Aircraft Carriers”.  IDF did add Podgy had his. 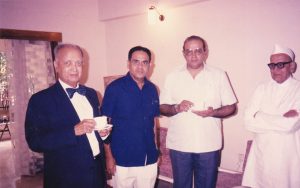 Cdr PP Batra who comments copiously  has commented on each Chief writes, “It is a great Ode,  and a great obituary to one of  great Admirals who helmed the fledging Indian Navy on its birth . You have a remarkable memory for details and made a great page of History. Podgy  Nadkarni, was a brilliant officer who was a one man show,  and was essentially a closed door Ops Room man.”

Cmde Rajan Vir Vice President  IDF, “I was in command of INS Deepak in 1976 and Podgy did a great job to salvage INS Godavari as TS1 off Maldives and related Op GODSAL, which IDF recounts.

Op  GODSAL  was a salvage operation that took 21 days that JGN  commanding INS Delhi as TS 1  succeeded in and  was awarded a Nao  Sena  Medal. INS Godavari sailed from Cochin for the Maldives on 19TH  March, 76. She was to rendezvous INS Delhi , tanker INS  Deepak (Capt Rajan Vir)  and INS Tir with cadets (Cdr KASZ Raju) on the night of 22nd.,  The ships  were   returning  from Mauritius after celebrating their national day which the Indian Navy has done every year and during one such visit INS Vindhyagiri (Capt Ramsagar) averted a coup code named “Flowers are Blooming”,  in Mahe on  PM Rajiv Gandhi’s directions with Soviet Cooperation  related in warring Nuclear Nuclear Navies—India and Pakistan.

Unfortunately Godavari  grounded North off Male  before she could make the rendezvous, with half of her, stuck on  rocks. Podgy decided to help her re-float    as INS Gaj arrived,  passed the tow rope with Godavari’s engines going astern but could not  pull her out.

Godavari was kept  in  good condition hoping she would be operational again. Finally a  more powerful tug  arrived  from Mangalore, connected huge hawsers and pulled her back, and pumps put on board INS Godavari so that she could remain afloat .

She was towed back to Bombay and unfortunately had to be sold as scrap. She was already old and had served RN   for two  decades as HMS Bedale and Indian Navy  for 23 years (1953-76).  IDF remembers 14TH Course Naval cadets  sailing on INS Godavari for two  weeks in monsoon seas after passing out of NDA IN June  to join INS Trir at Trincomalee  with Capt Nair in command.  Chief GI Anjuman was put in  charge of us and all he knew was Gunnery so thought he could make Gunnery officers out of us in 10 days by perfecting us on loading and unloading his 4 inch guns. IDF recalls puking while loading those heavy shells, dummy firing them and unloading and reloading the shells……thought of quitting the Navy. Sea Sickness is terrible and now some  ships have stabilizers  !

A new Godavari was commissioned by Capt Keki Pestonji and IDF did the helo landing trials in harbor for MDL’s empty hull.  INS Vindhyagiri’s 14 ton new Sea King Helicopter landed slightly off centre. The empty Godavari rolled and tilted 15 degrees and the huge Sea King began  sliding. The air crew could not control the hulk but the copter stopped when  one wheel stuck in the gutter ! Providence and luck it was. It could not be pushed back by the 60 on board ! 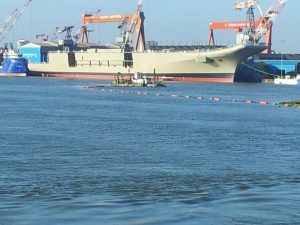 IDF ordered to fill oil tanks with water, righted the ship and Flight Commander Jetti who later was COO for Spice Jet has never made a faster take off with IDF in the rear seat. We  went on board INS Vindhyagiri for  stiff refreshments wondering what our future would have been if the Sea King fell into Davy Jones Locker (Divvya Loka).

We never saw Godavari with 2 planned Sea Kings but  the RAST traverse gear from Alcal Canada was fitted  fast for the ship’s own Sea King to land. Seakings are still running after 34 years with small Alouttees  which are still  operational after 45 years. Most Navies have moved on with new LUHs and Multi Role Choppers! Podgy must be watching as he wrote Navy needs more money…but who listens as much as for yoga on the Helo Deck.

It is time now to bid Admiral Podgy good-bye one did not realize how full fourteen months slid by, from him we learnt how to combine work with fun bur never ever to leave the day’s job undone.

No sooner he joined we were off to the East returning to Bombay after two months at least during this period the fleet participated in FXPs and TACEXs in the later, the adversary was made Mince Meat of, as if by axes.

The ensuing months saw TTBs galore and Rushtons shot down, a lesser score was met with Admiral’s frown. PMFs conducted were a dozen plus we would have done more but the Annual Practice Allowance AAP  was bust.

Every navigator got out the astro-plot from its box. The  chap put into his place was Cdr Magnavox.  RAS timing figures were brought down crashing.  It was Admiral’s way to make his Captains brave and dashing. 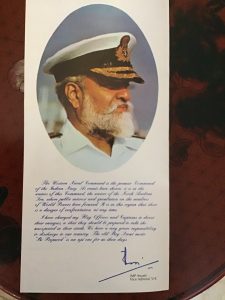 MAGREB put to taste the Fleet tactics when we also had company of Pak Atlantics overhead. We played host to the Soviet and our Defence Minister and the Chiefs from Moscow and Westminster.

The fleet had its cruises a total of seven . The largest number went to Jeddah and Aden. Our own ports were also time and again seen which included Lakshwadeep, Saurashtra, Goa and Cochin.

The Admiral also found time to shoot the fleet in all colours and fish for tuna in the Lakshadeep waters. The fleet cinema saw its first screening. He pushed the fleet sports on the road to winning.

A humane person and with a ready ear always approachable and always near. Now as he goes he will miss the fleet, we will also feel his absence.

Previous Post: CAN INDIA SIT ON THE FENCE OVER TRUMP’S SANCTIONS ON RUSSIA ?—UNLIKELY– BUT IT CAN GET EXEMPTION FROM CAASTA IF IT CUTS A DEAL WITH TRUMP —— BUY THE PLANES WE NEED BADLY FROM USA —- AN RFI IS OUT ! GO FOR IT —–TO PLEASE BOTH USA AND RUSSIA !
Next Post: IS SOUTH CHINA SEA GOING GOING GONE INTO CHINA’S LAP? TIME IS RUNNING OUT TO MAKE CHINA ADHERE TO UNCLOS (1982) WHICH USA HAS ITSELF NOT SIGNED! LESSONS IN THESE INTERESTING TIMES AS INDIA PAKISTAN CHINA & BHUTAN TOO HAVE NO DEFINED BOUNDARIES!