Every on loves to be invited to St TROPEZ by the rich and famous people, leaders, golfers and footballers who own Villas and Yachts and the city knows what tourism is all about and , how to attract people year round and now Indians are flocking to the French Reveria and are big spenders. Defence is also big biz !

Combining both Defence and Torism is what St TROPEZ’s Mayor a former affable diplomat, and Dy Mayor Henri Allard grandson of GEN FRANCOIS ALLARD and his son Submariner Cdr Frederic did brilliantly for three days from 15th Sep and asked those who could to stay on and see how crowded St Tropez gets on Sundays. 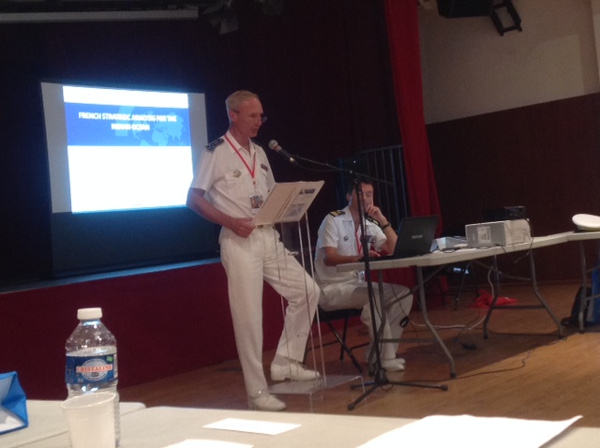 French economy appears to be struggling to maintain its high standards and Le Penn speaks for Francexit for the elections, as Merkel loses steam and money for EU. 13 % Indians world over ie 150 mill are rich and getting richer and spending ! The change is slow for the poor, India’s infrastructure and change in mind set is not being attended to as RSS rules economy and elections and India’s rules of business are tardy. So PM Modi is attending to Foreign Policy personally from the hip.

St Trpoez organized a seminal Defence Naval Meet with speakers and an exhibition on the amazing life of MAHARAJA RANJIT SINGH with the Director of Tourism of St Tropez and glorified Singh’s top General Allard Commander who did wonders for Ranjit Singh’s Army and his victories in Peshawar and Afghanistan with Hari Singh Nalwa.. French embassy in Delhi had a function same day.

By luck IDF spent four days since 15th Sep in St Tropez which is one of the most favoured French Reveria’s sea resorts near Toulon (bus 3 euros), Cannes and Monaco in VAR not for the rich alone and an ideal venue of a French –India Naval Defence Cooperation Conference . F-21 torpedoes India needs for Scorpenes are manufactured near by. 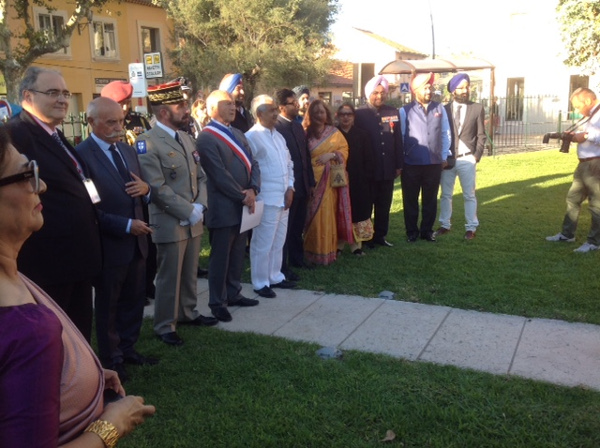 Admiral Du Che, C-in-C of the Mediterranean arrived with his N5 aide Capt Ouk from Toulon and presided and spoke, and said France is an Indian Ocean state (owns 300,000 sq km of EEZ) and brilliantly gave a French appreciation of the IOR on its importance. He looked to India’s plans and told all, France can be India’s natural partner as it is independent in its thinking possibly hinting at strong partisan , or NATO members and UK. 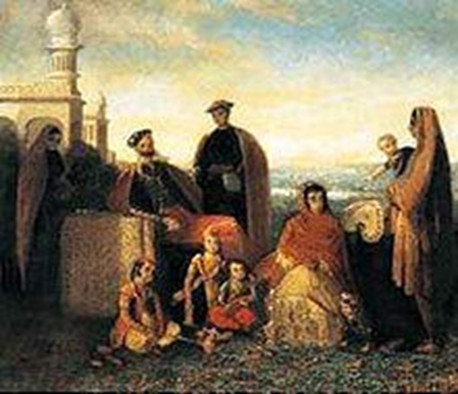 Naval officer from Paris and ex DA in India Gen Switzer joined. DGA which does International supplies from France was there to speak and French MOD and Industry officials there listened and seemed aware of challenges of doing business in India. IDF sees no Strategic Partner rules or methodology yet for true MAKE IN INDIA and India needs technology. There is big Biz to come.

IDF in sidelines explained India will have to balance most purchases from USA, Russia, France and Israel. SCS came up in side lines and IDF is clear it will linger till China is sure of its military and economy and rise and then one day will open TAIWAN’S Taiping Dau island not clear in the PCA judgment or share waters if forced. China has patience.

DCNS France has been refused big investment in a Make in India AIP project as MOD is stuck with RFI -RFP and Trials rules and services’ long dilatory route with PSU and DRDO interests. RM Parrikar is more a politician for Goa and is smarter than what he shows, like Antony was. This was a view as Parrikar spends every weekend he can in Goa, when actually MOD files need to be attended to and cleared. Bureaucrats are seen less at parties and golf. Its gulag ? 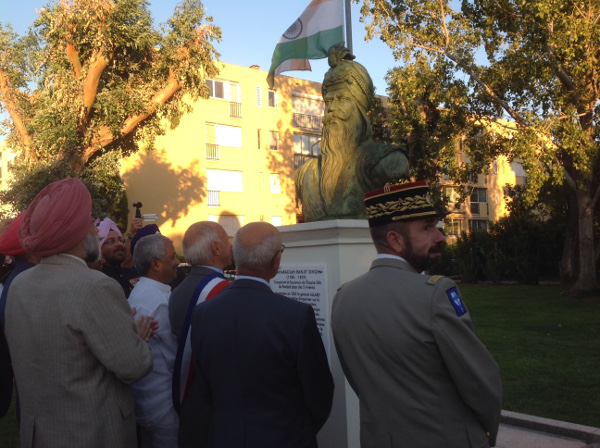 Five speakers from India were there. Cdr Dr Sakuja from NMF, Dr Manoj Joshi from ORF, both labored on Indian naval STRATEGY and how modernization has been neglected and echoed Adm Du Che on strategy, as if there is a national strategy in the public domain? But kept flag flying and answered questions as Navy has issued a Maritime Strategy and Doctrine !

IDF as an independent analyst spoke briefly with a 20 slide Power Point and flashed Navy’s new ships and the 48 war ships on order in India and 2 DSRVs from UK for $ 292 mill, costs, budget, make in India and equipment and the Future Navy.

Two GSL GMs spoke under retired Vadm BS Randhawa’s chair. And Gen JJ Singh ex COAS spoke in French but IDF got the gist as Army’s worry is from China and land borders as talk began flying on 17th after URI attack India needs him as Governor in Kashmir. It was Drink Talk after beer and champagne but in India you never know !

Mr Ramachandru Keshavnath ex IAS and JS in Mod once, now rep of Telengana in ND eloquently invited biz to Telangana with glossy brochures. Lawyer Dinesh Rao who gave rules in writing spoke on evolving DPP rules with Q&A and there were unanswered questions and Randhawa now in industry answered with assurances.

All speakers were focused and spoke freely and at breaks and evenings all asked if India is repeating ‘Nehru’s Forward Policy’ ior are times like Mrs Gandhi’s 1971 Bangla Desh operations and is India serious about making Baluchistan independent and taking POK. Is DPP like UPA’S careful DPP ?

French historian with lady friend from India was knowledgeable spoke for an hour on Indian history and French connection in French with slides and he follows India. IDF exchanged notes in his best English and distributed some Warring Nuclear Navies –Pakistan and India opies, which was appreciated. 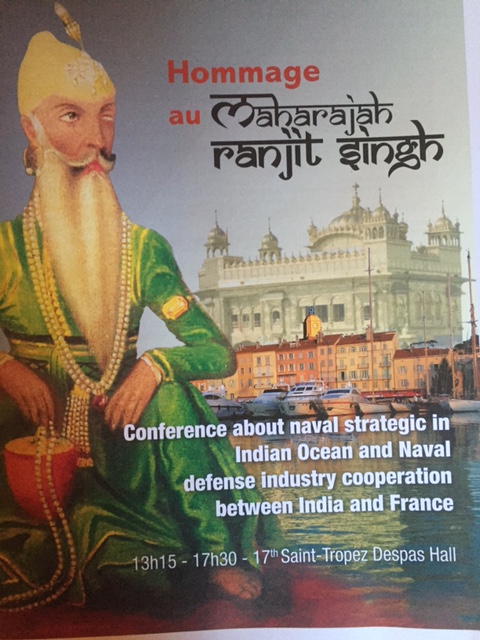 I answered him faithfully we have no Mrs G and still looking for a Manekshaw to lead and Chiefs seem not serious about a CDS and bureaucracy rules India . Manoj said Naresh Chandra committee has answers. India’s Ambassador to France Dr Kumar seemed busy and kept flitting in and out and spoke in French in which he holds a Doctorate. His two able Army and Air Force attaches were silently there and they will write reports to DIA.

The VAR sea coast with blue seas and hotels and moderate weather is an attractive venue for conferences. The city took advantage and laid out an exhibition on French General Allard who trained Maharaja Ranjit Singh’s Army for 4 years 1822-26 with Italian General Ventura.

Jean-Frannçois Allard (1785 – 1839) was a French adventurer born in Saint Tropez, and twice injured while serving in Napoleon’s army. He was awarded the Légion d’honneur. After Waterloo, he drifted around and went to Persia where he visited Abbas Mirza and took service. He was made Colonel, but never received the troops. In 1820, Allard left for Punjab. In 1822 he entered the service of the Maharaja Ranjit Singh to fight Brits. He was commissioned to raise a corps of dragoons and lancers and awarded the rank of general.

In June 1834, Allard returned to France on leave, but returned 18 months later getting French support. He served the Maharaja until his death in 1839.
Others joined later and these officers drilled the Sikh army into a formidable force.
Allard was awarded the Bright Star of the Punjab by Ranjit Singh. And fought alongside Gen Hari Singh Nalwa and made the Sikh empire great till Afghanistan, an amazing history lesson on military diplomacy like Tippu Sultan’s, the Indian Army probably studies as Ranjit Singh used French knowledge and technology to screw and bring Brits to the table and they never touched his great empire. Mrs JJ Singh a renowned painter in her right displayed a show of gallery of paintings the French came to see in numbers.

The mayor of rich St Tropez and many invited Sikh and Indian families in France and UK gathered to unveil Ranjit Singh’s bust in Allard park on 16th sunset and after Mass in the Tropez church on 18th all went to the cemetery for homage by Indians and French and a garden barbeque lunch at the Allard villa. It was to promote tourism and discuss defence business with India as France is signing $ 7 bill 36 Rafales.

On a sunset boat ride IDF saw Lakshmi Mittal’s and Yeltsin’s villa where his daughter lives, and last place Diana stayed with Md Said and so many beautiful villas all with helicopter pads and expensive yachts. One villa was quoted at $ 600 mill. Indians boasted Ambani has $ 1 bill place in Mumbai.

On weekends St Tropez is full all the year. It was a memorable visit and invitation to Naval Base Toulon followed. It is French Navy’s biggest base.

Previous Post: BJP-RSS MESSAGED ‘CONSTRUCTIVE INDIAN NATIONALISM’ AND NEED TO ABIDE BY UNCLOS AT INDIA FOUNDATION’S PATH BREAKING IOC-16 AT SINGAPORE
Next Post: THE STORY OF INDIA’S SUCCESSFUL QUEST FOR NUCLEAR SUBMARINES (ARIHANT+2) WHICH SHOULD MAKE EVERY INDIAN PROUD (PART 1)