On 15th  August, 2014 PM Modi electrified the nation in his long maiden speech from Red Fort  and heralded   a “ Make in India for Defence,  and  Exports”,  and  set the cat among the Pakistani pigeons (and  Chinese)  by demanding Indian Kashmir  back and supported Baluchistan’s  Independence …Gwadar in CPEC.  A new dawn promising a  corruption free Government  was articulated by an orator ‘Par Excellence’ and  BJP took office in April 2014. A   Roman gladiator type stylishly  Prime Minister Narendra Modi took over.

PM Modi looks older in 2018. The Line of Control and working boundary  that Pakistan disputes in J & K,   is more active and India’s fine  Army is deeply mired  in the difficult task protecting India’s people, India’s interests  and integrity while a PDP-BJP dissonance rages there.  India is richer, stronger in the external arena but internal security, policing, bickering between states and Naxalites and  an impatient youth population are unable to fulfill their  aspirations. Is the cup of India half full or half empty ?    If you look at 4 years  as a majoritarian Hindu,  the cup is more than half full with Hindu power and Ram Mandir too seems nearer !

This IDF post states that the next five years could see a  improvements in India’s security if a chastised and  experienced  BJP comes back to power,  as they have bumbled along well for the last four years,  learnt a lot  and fiddled with ‘Make In India’ so  India remains  No 1 importer of Defence equipment. This has to change and must. It will,  no matter who comes to power is the good news. The gene of Make in India,  that the Indian Navy heralded is out of the bottle ! DEFEXPO-2018 showed that near a remote temple South of Chennai !

India has direct orders for 36 Rafales, 12 Chinooks & 22 Apaches from FMS and 2 Krivacks, 4 more 737 P8Is, Phalcons and 155mm guns all on direct payments and 5 Scorpene CKDs  all worth over $ 16 bill. DRDO silently imports a fair percentage.  PSU’s   make Su-30MKIs,  Tejas,  sonars, communications, EW  and radars with large imports in FFE. But the good news is many large  apolitical companies like Larsen &Toubro Ltd, Mahindras, Kalyani’s Bharat Forge and Tatas  and such are now making more in India. Others get help from Israel  like Apha Design, Punj  and Data Patterns and such are suppliers. Rosboron Service and Krasny are now supporting the Armed Forces.  India’s nuclear submarines are more Make in India too, but lean on Russia.  DEFEXPO bared much and MOD is less important for medium partnerships. MOD must allow 74% FDI.

Indian companies  with war chests and political support like Adani have moved in. Haldi Ram too wants in. Sadly  private players like ABG and Reliance Defence (Gandhi and Anil Ambani)  have let the Navy down when it trusted them,  and  PSUs with nominated orders are complacent, as MOD controls their ‘ business plans’. Small SMSE’s have done wonders with supplies and exports but that is in few crores in self help.   A big SMSE MKU has done well with exports but  even there politics listed in paras above like one sees in appointment of Judges or Institutions has a say. IDF sticks its neck out to say this, leaning on  VD Sarverkar’s call  and its called ‘Hindutva’ which defence has still to understand ! Backs are still scratched.

After DEFEXPO 2018 over 100 French Defence suppliers under the banner of GIFAS funded and joined the newly formed  Society of Indian Defence Manufactures (SIDM) meet under CII thanks to Mr Jayant Patil of L&T and ex VCOAS Saha  in  a path breaking B2B meet  with Indian small and big Industry reps.  GOI supported with RRM’s presence. The   organized French and  Indian ˜Industry Interaction on what Indian companies and SMSEs could do with French and ‘Make Projects’ and exports in Taj Mansingh (under  auction) was amazing.   The one day interaction was  one to one,   face to face across tables  with discussions between industry representatives. Results have already come in. 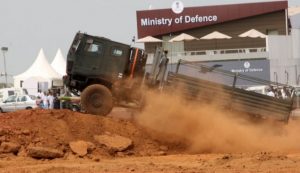 On 26th April Navy’s  Project Officers of various Make projects listed below met Indian  Industry in another SIDM CII meet at the Habitat Centre. The Navy gave a list of needs for indegenisation. During deliberations the basic technical requirements and other modalities of indigenisation, envisaged for development of items was  discussed and secrecy was off.  The opportunity assessed the probable Indian Industry interested in various projects and this will form the data for project officers to further interact with industry for feasibility study. Navy had pioneered Directorate of Indigenization.   WEESE and DND which are now being emulated  in forms. BZ.

Under  PM Narendra Modi’s hard hold rule,  a lot has happened for India’s consumption economy and PM Modi  has personally propelled India on to the world’s stage as a potential multi-polar aspirant to be considered seriously and his actions and antics inspire confidence. PM  Modi is in Wuhan to meet with President Xi Jinping to reduce the trust deficit after  73 days of  Doklam as IDF posts this but here are the cracks in BJP government’s journey.

Because of the over enthusiastic and ambitious RSS effect and BJP new to ruling a 1.3 bill intelligent  people India has had a  lack luster cabinet  so trusting advice and action comes from  PM’s  trusted PMO while  local religious issues are  bandied  by VHP (Tagodia removed) and Bajrang Dal  who helped Modi’s  election which had  huge doses of social media by NRI’s monetary and technology support. The BJP  effect has seeped  into India’s internal security policies and affects the Army most and changes of Defence Ministers from Arun Jaitley (AVBP), to Manohar Parrikar(mild RSS), back to Arun Jaitley and now Nirmala Sithraman they have had their incubation periods in comfort but future RM’s are  poised to do better, tactically blooded by Doklam as explained in IDF’s last post.

BJP’s  governance and hand on the tiller of India have been the best of times and also the worst of times for the Armed Forces and for  India too and it continues that way as elections near. It will be even more interesting.

That  combination of power and mobility  is vital to avoid war,  while diplomacy and negotiations are the better options to solve differences in this age of proliferating nuclear weapons,  especially in the region around India, which is challenged  with poverty,  border resolutions left over from the British with Pakistan and China.  The new Defence Planning Committee set up under National Security advisor Ajit Doval who has had four years in office to address  national security and related issues is  very timely. Under  the aegis of the NSA  actions can be like a CDS would like with  the foreign secretary, three service chiefs, and the secretary (expenditure) included  and has been given the mandate to invite any specialists as NSA may desire and is a  much-needed step in the right direction. Its mandate is to formulate the draft national security strategy, defence engagements, and modulations for facilitating capacity development along with self-reliance (Make In India) in the defence space with a focus on infrastructure, technological advancements, and future exports, is also laudatory.

The NSA, would need experts in the sphere of cyber security etc and hope he can convince the Committee to have Theater Commanders. Shan Na Varuna with list.