IDF ANALYSIS is that the Russo-Ukrainian war has been an unusual war, between NATO and Russia and is being fought with Ukrainian lives on Ukraine’s  soil to  Biden’s  delight and China will be the cat that licked the cream to see a more dependant Russia, with Putin’s chest a little less out. China has signed the Solomon Friendship agreement and PM Morrison’s opposition is giving him a head ache.   USA talks of severe action but the Solomon agreement is done and the reading of the circulated version depicts Solomon islands has ceded its internal and external security to China 7000 miles away, for money it is receiving for a naval base. 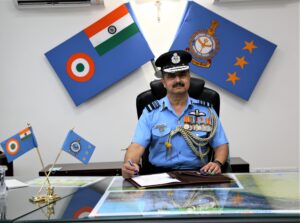 Even before the Russo-Ukrainian war began in the Eastern Donbas region, where the Russians  had its military in place, the local  Ukrainians and even Russians living in Ukraine  as separatists have been fighting Russia since 2014.  Putin by calling it a ‘Special Military Operation’ put it’s Military in a quandary, who six years ago walked in as gladiators into Crimea. The world has not recognised Crimea as Russia’s, but Putin hoped to remove President Zelenskky with a Russian puppet but Putin has been check mated by spirited Ukrainian fighters, as they knew how to operate the weapons they had since the Cold War with studied tactics.

The poor conscript Russian soldier must be wondering, “Are we fighting a war with our ex-Soviet friends, many married to Russians,  or are we on a peace keeping military mission with old tanks and equipment to quickly bring Ukrainians who want to join NATO back in our fold by a bit of bullying and killings if they resist”. Resist the Ukrainians did to Putin’s, and Russians surprise as Ukraine was prepared for Nuclear war in the Cold War and Russians found fighting in cities and built up wartime underground shelters impossible without massive bombing  and tank columns were wiped out with anti-tank weapons and Turkish Baktayar drones.

NATO    via Poland enabled wives and children to escape. Europe welcomed  Ukrainian  refugees, especially women  as educated white Christian labour with doles.  Internet was not touched and the Russian military had contradictory orders to blunt Ukraine’s  military facilities, that action the world saw live on TVs with minimum  harm to buildings with less lethal weapons. It was an unusual war that experts are studying for lessons. IDF has been commissioned to do a report on Russian weapons that India has in common, and were used in the war. Initial comments by IDF are India modifies Russian equipment to Western standards and India has world standard of training for secular dedicated  apolitical troops who die for Regimental honour.

Indian military’s many assumptions of Putin and the Russian military’s fighting capabilities have been overturned by this invasion especially with respect to NATO’s equipment to considerations of nuclear deterrence.  India has a lot of Russian equipment but much has been upgraded with indigenous Indian software and imported hardware and made battle worthy with the unique experience of doing exercises with the best in the West. The SU-30 MKI has Indian fly by wire and controls, naval ships with Russian and Ukrainian prime movers have mixed weapons from Russia and West with changes and Indian built nuclear submarines have  basic design from Rubin in Russia when Russia was cash strapped in the 1990s, but modified. Most military heads came to the Raisina Dialogue  to discuss the war.

Indian cash rich TVs sent  reporters with visas and Russian and Ukraine help,  who reported from vantage points, as   India has supported PM Modi’s friend Putin for India’s  national interests pushing morality aside by abstaining to vote against Russia. Yet PM Modi an autocratic leader himself, has said he has many times spoken to Putin and asked him what he was doing, and where was he going. PM Modi’s double speak are a subject of study for researchers as he has propelled India well, and many say better than any former Prime Minister with his synergetic style of 24×7 work with surprises, and  he pushes  India’s  bureaucracy to deliver, with a policy of Hindutva to erase history for a Hindu Rashtra. India’s desirable maritime geography and capabilities of the educated mass are India’s assets to propel India in this century, leaving poverty and unemployment to reduce .

Today Ukraine regrets it removed its nuclear deterrent based weapons on guarantees of the Budapest Agreement from sovereign Moscow. The Budapest Memorandum on Security Assurances has  three political agreements in writing signed at the OSCE conference in Budapest in  Hungary  on 5th  December , 1994, to provide security assurances by its signatories relating to the accession of Belarus, Kazakhstan and Ukraine  to the NPT, which was  originally signed by three nuclear powers: Russia, UK and USA and China and France joined with  somewhat weaker individual assurances in separate documents. India did not sign NPT. 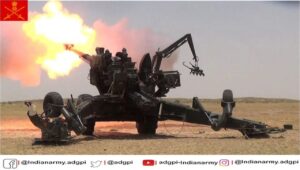 The Budapest memorandum prohibited the Russian Federation, the United Kingdom and the United States from threatening or using military force or economic coercion against Ukraine, Belarus, and Kazakhstan, “except in self-defence or otherwise in accordance with the UN  Charter”. By  1996, Belarus, Kazakhstan and Ukraine gave up their nuclear weapons. China got  help from Ukraine on defence, not made public. Sadly neither India or China have raised the Budapest Agreement in UN despite EAM Jaishankar being aware of it. Era of keeping agreements is over or even morality, for national interests China’s South China Sea is just that—–Might is Right in International matters.

Ukraine’s general staff has said Russian forces were pressing their offensive in the Kharkiv and Donetsk regions and they had captured several settlements, but Ukraine retains control over the majority of its airspace. Britain’s defence ministry said, that Russia has failed to effectively destroy Ukraine’s air force or suppress its air defences. Russia is settling down to end its offensive as the sinking of the Moskva was a shock and  blasts in three Russian provinces bordering Ukraine,  and as an ammunition depot in the Belgorod province caught fire around the same time. 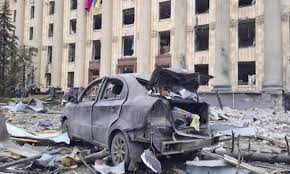 Britain’s foreign minister Liz Truss says she plans to call on allies to “ramp up” tank and military plane production to help sway the conflict as arms flow in from Poland. Hence Russia’s Gazprom has suspended gas deliveries to Poland and Bulgaria, citing the two countries’ refusal to pay in Russian roubles, prompting accusations of “blackmail”, and breaking contracts.

The longer Ukraine’s army fends off the invading Russians, the more it absorbs the advantages of Western weaponry and training — exactly the transformation President Vladimir Putin wanted to prevent by invading in the first place is taking place. New American battlefield Switchblade aerial drones and the most modern U.S. and Canadian artillery, anti-tank weapons from Norway and others, armoured vehicles and anti-ship missiles from Britain and Stinger counter-air missiles from the U.S., Denmark and other countries are pouring in after a  conference of NATO defence ministers at Ramstein that Germany to unify the West’s efforts to help Ukraine “win today and build strength for tomorrow.” India has lessons to learn from this war and the disregard for UN Agreements.

Previous Post: THE SINKING OF RUSSIA’S BLACK SEA FLAGSHIP THE MOSKVA ON 13TH APRIL, 2022 AND THE RUSSO-UKRAINIAN WAR HAS LESSONS FOR ALL NATIONS ——-WAR CANNOT BE WON WITH MODERN WEAPONS