On 27th Jan the Navy announced that, all Commands and Services including Coast Guard units, which unlike BSF and other armed Police forces come directly under the Navy for war and exercises, got underway in Ex TROPEX-17 from 24th Jan for a full month with extensive drills and weapon firings with interoperability. This duration is as long as any major country exercises, as it taxes units, logistics and ship’s engines to limits.

However today’s gas turbines and diesels like aircraft engines, can operate trouble free for long durations as planes do with checks, unlike in the past, when steam driven ship’s boilers and earlier diesels had limitations and steam ships required four hours to raise steam in the boilers. The world is moving to diesel-electric propulsion for ships like in our locomotives, and this propulsion is on Navy’s engineers and designers drawing boards, with nuclear propulsion for submarines and aircraft carriers. USA with its latest DDX and UK with Daring class and French FREMM have diesel electric propulsion. 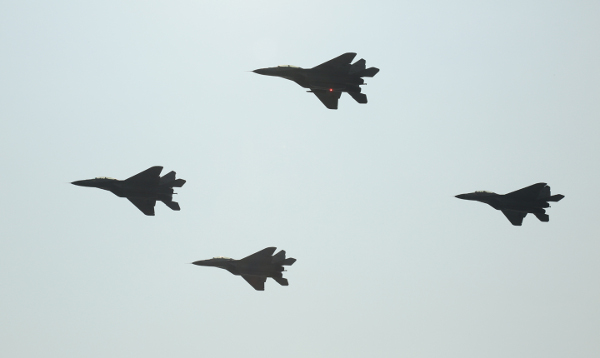 INS Vikaramaditya has quick firing boilers, but IAC-1 Vikrant has four LM-2500 GE gas turbine engines assembled by Hindustan Aircraft Ltd(HAL) and choices for 65,000 ton aircraft carrier being designed, called IAC-2 Vishal ( the name is yet to be approved by government, as its prerogative) could have nuclear propulsion like all US and French carriers, especially if Navy goes in from EMALs -Electro Magnetic Launch for aircraft, instead of a steam catapult Navy operated on INS Vikrant.

Navy has issued an RFI for MR Carrier Based Fighters (MRCBF) t for Vishal intended as day and night, all weather multi-role deck based combat aircraft for Air Defence (AD), Air to Surface Operations, Buddy Refueling, Reconnaissance, EW missions etc from IN aircraft carriers. IDF’s lay reading smells of Rafale type twin engine for full heavy weapon load for take off for the 2030’s, Anil Ambani’s Reliance Defence has been chosen and objections dismissed by the Competition commission to partner Dassault for production and spares as was indicated by IDF. At the last AERO India, Anil had stated he was personally told by PM Modi to help in ‘Make in India’ so he went into defence ! Choices of aircraft are few and Navy will gain from the the 36 Rafales experience of IAF like they did from Mig-29s and 21 pilots have deck qualified.

Indian Navy is builder’s Navy and has arrived in world quality, almost, with exposures to top Navies and its WESEE for technology and DND for designs built up over years. Its men and women are versatile and quality man power for expansion is the big challenge, as naval personnel are offered lucrative jobs in civil arena. Women are demanding permanent commissions in fighting sea branches. Navy is opposing them in court and rightly so, as our culture is not ready for them yet. The Army &IAF are terra ferma forces and IAF has three fighter pilots, currently on show. 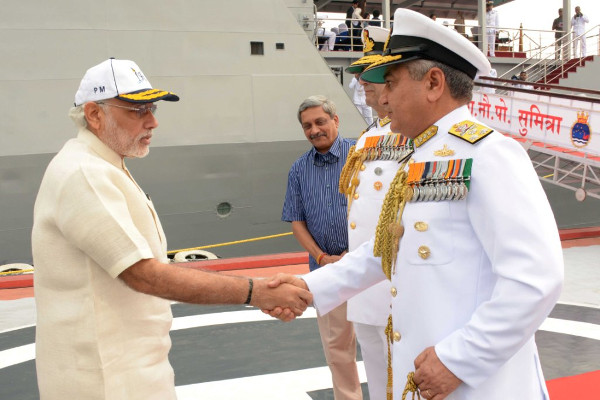 TROPEX is being conducted next to Pakistan where China has staked big, and is the best message for a show of deterrence on the West Coast not far from Karachi, Ormara and Gwadar where China’s Overseas Port Holding company has taken over Gwadar and China recently presented two patrol ships to the Pakistan Maritime Authority, for patrolling the waters with Pakistan Navy’s 3rd Maritime Battalion, bearing all the costs from its promised $ 46 CPEC.

Pakistan is thus sinking into big debt, called ‘Tribute’ by the Middle Kingdom (China) which is extracting strategic flesh and has completed a part of Maritime Silk Route(MSR), but at a cost it can afford. China is celebrating their New Year ( Rooster) with fireworks world over. According to the Chinese zodiac, people born in the Year of the Rooster are brave, responsible and punctual. Did PM and President wish Xi Jinping ? IDF missed the wording.

This Tropex off the Western Seaboard has grown since last held 2015 witnessed by the Service Chiefs. It takes tremendous inter service preparations and involves diverse units not actually held in a theatre command, the need of the hour, but from dispersed units, many operating jointly for the first time. TROPEX includes opposed amphibious operations off the Gujarat coast and rightly the Navy has appointed a Flag Officer at Porbunder, where PM commissioned INS Saradar Patel. PM may witness Tropex after elections.

TROPEX has grown in scale and complexity and this year will see major surface combatants and air assets of the Navy led by the aircraft carrier Vikramaditya with Tiger 300 Sqn’s Mig-29Ks and Kh- 35 missiles by deck qualified pilots with many hours in the full scale MiG-29K simulator, the 9,000 ton nuclear submarine INS Chakra on lease with underwater launched missiles and torpedoes, the US supplied and furbished in India 18,000 ton luxurious Landing Platform Dock (LPD) INS Jalashwa, the recently commissioned Type 15A destroyer INS Chennai with 8 Brahmos and Barak 2 missiles made in India. PM Modi can take the credit for pushing the DRDO and appointing Navy as IAF has the same MR Barak 2 with boosters for long range. 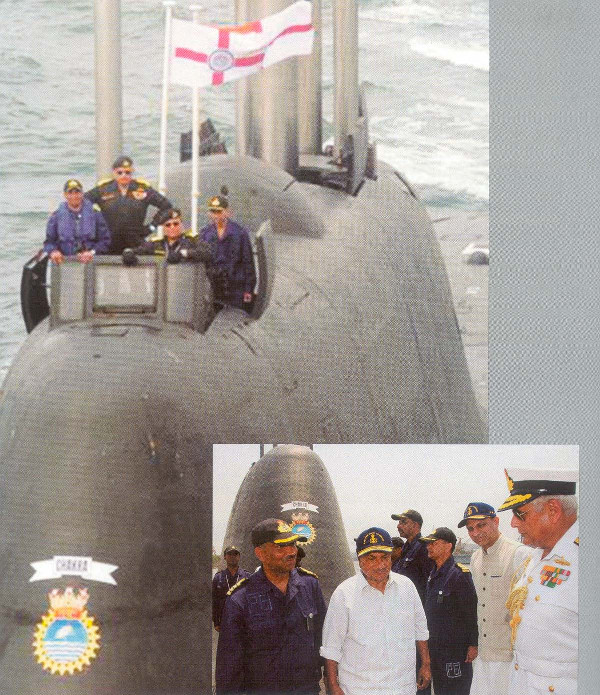 Tropex stands for ‘Readiness’, i.e. Theatre Readiness Operational Exercise, and will exercise ships and aircraft of both the combined Western and Eastern Naval Commands with massive missile power in competitions. The Flag Officers will hone Command and Control procedures, the sine de nom of victory. Powerful assets from the Indian Air Force, Army and the Coast Guard will exercise at sea.

Navy’s 8 (plus 4 due soon) P-8I 737 long range maritime reconnaissance planes with Mk 84 Harpoons and Mk 58 torpedoes and other anti-submarine warfare aircraft (TU-142 and IL-38 and Dorniers ?) operating with GSAT 7 interlinked data and communications will operate alongside the Air Force’s SU-30 MKI, Jaguars, IL -76 Phalcon AWACS, IL-78 Flight Refuelers of the powerful IAF and fighting units of the Indian Army of this scale, not reported before.

TROPEX 17 assumes special significance in the backdrop of the current security scenario as the media handout officially says, and the exercise is aimed at testing combat readiness of India’s military and strengthen joint operability in a complex CRBN environment. This exercise comes after the surgical strikes on 29th September, and warnings to Pakistan on terror and China that its CPEC is on India’s Pakistan Occupied Kashmir.

Notably, US government has released all classified papers of 1971 war among the 12 mill documents. US believed that India’s PM Indira Gandhi might attack West Pakistan to capture Pakistan-Occupied-Kashmir (PoK) after India’s operation to create Bangladesh. Geo-equations have changed since, and that was when USA had tilted to Pakistan and was grateful to Pakistan for connecting USA through National Security Adviser(NSA) Henry Henry Kissinger with China which opened business opportunities for USA. Actually China gained more and Trump wants to change that. Today India is USA’s ally and USA will keep out as India demands POIK back. It’s also a 1994 Parliament resolution and burden will fall on the Army.

Today India and Pakistan are nuclear armed, but doubt each other’s Mutually Assured Destruction (MAD) capability that kept the peace between USA and the Soviet Union in the Cold War and analysts call that period, a period of tense stability. No nation would like to use nukes and no wonder RM Parrikar was goaded to re-open NFU to make sure Pakistan never uses its Nasr Tactical Nuclear Weapons (TNW). Some one must have briefed him. NFU a complicated strategic issue, being debated. 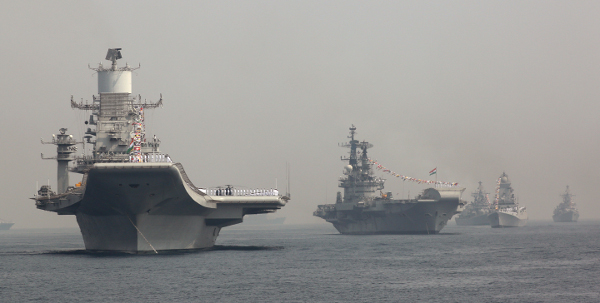 According to the documents, though Nixon had “warned India it would cut off economic aid in case of war in East Pakistan, the US administration was clueless on how to implement it “, and Nixon lamented he did not have full Intelligence and leaned on China. On 17th August, Kissinger told top defence and CIA officials, “No one has looked at the consequences or examined the means of implementing a cut off.”

Concurrently Indian TV ( as Radio is not allowed in India) is re-opening and reenacting the 2002 laser attack across the LOC in Op Parakarma as former IAF Misra and CAS ACM Krishnaswany have disclosed details but one blog had it earlier. IDF ASKS has India arrived as an economic and military power competing for a position after USA, China, Russia and with Japan ?? Shan No Varuna. Bande Mataram.

Previous Post: PAKISTAN RELIES ON MISSILE & MILITARY SUPPORT AND MONEY FROM CHINA WHICH RELIES ON PAKISTAN FOR ITS SOUTH ASIA AND IOR STRATEGY FOR ITS ASPRING 1.3 BILL AND HAS DREAMS LIKE TRUMP’S AND MODI’S TO MAKE THEIR NATIONS’ GREAT –IDF DEBATES –HAS THE TRIANGULAR CLASH BEGUN ?
Next Post: ‘MOYA DRRUG’ KADAKIN RIP SIR- FEW KNOW HOW ASSIDUOUSLY & SILENTLY YOU SUPPORTED GORSHKOV’S DREAM FOR INDIA’S NAVY TO BECOME WHAT IT IS TODAY -WORLD CLASS & NUCLEAR—-VMT CPACIBA YOUR EXCELLENCY !