IDF Report on what makes a Navy great.

“It would not be an overstatement to declare that the ‘sea power’ to a large extent dictated the outcome of wars up to and including World War 11 ”. These were words of Dr VK Aatre Chief Controller(R&D) Defence R&D Organisation who trained on sonar technology in Canada and IDF accompanied him to Canberra for a Maritime Conference.

The above comes to mind as The Indian Navy’s only Ocean going sailboat, Mhadei, returned to her homeport, Goa, today. A team of six young women officers from the Navy, trained hard off Goa and were met by RM Manohar Parrikar at GOA, completed a thrilling historic first when they returned to Goa successfully after a voyage to Mauritius. The team on their maiden, and India’s first all-women crew ocean voyage, covered a distance of over five thousand nautical miles through treacherous monsoon seas and heavy winds. The voyage had commenced in Goa on 24 May 16 and reached Port Louis, Mauritius on 14 June 2016. The team has thereafter successfully completed expedition on 14th July when they reached INS Mandovi ‘s Boat Pool where Indian Navy’s Higher Command courses are held. 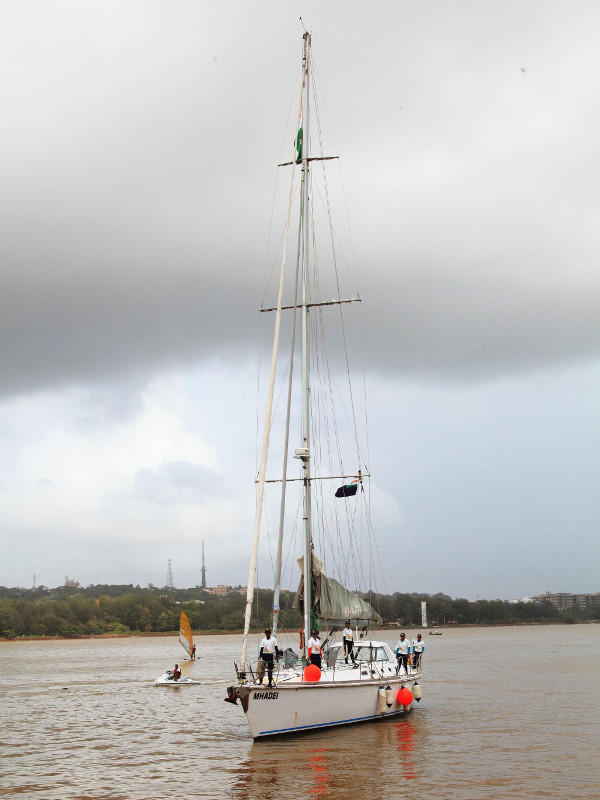 It needs noting oceans have always fascinated man and he has, from early days of civilisation, turned to them for adventure and exploration and only Navies which encourage their men and women to get salt in to their veins can a Navy be great. The Indian navy does that credit goes to Adm (retd) Manohar P Awati for doggedly at his old age in his 80s or past goad Chiefs of Naval Staff to support long OCEAN VOYAGES AND ROUND THE WORLD CRUISES.The nation also has a duty to instill sea going traditions and educate and instill the sea going spirit to be a Maritime Nation, and the Maritime Museums in Paris, Lisbon, Ankara, Washington and Cheng Hi museums and Temples set up in China with his statues and expeditions of Gheng Hi are taught in schools, should goad our Government which works at snail’s pace.

China is on its way to be a MARITIME POWER and it is flexing its maritime muscles in the South China Sea as IDF writes after the PCA verdict against it posted on this site in some detail. Philippines cast its case simply and clearly to ask two questions. One is historic rights valid in UNCLOS and are the built up rocks in the South China Sea Islands and ITLOS ruled for Phillipines against China and tension prevails. 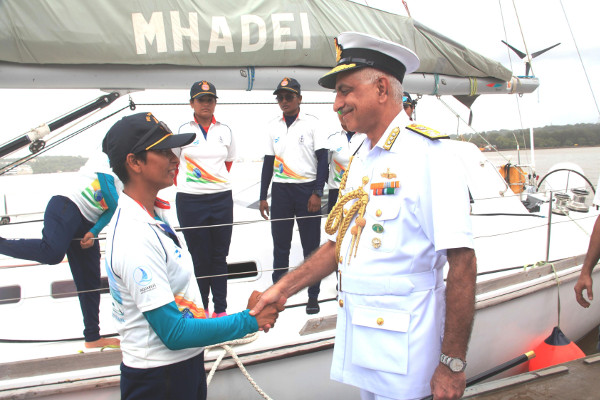 Oceans are the ‘main highways’ for extending ’empire’ and ‘trade’. And in this century exploitation of the EEZ and waters of the oceans for resources, living and nonliving to fill un-satiated stomachs and need for energy, will call for a maritime spirit and maritime power. China has already ordered all merchant ships designs to be designed and equipped to become war role ready if needed. With such a role to play, oceans have been the arena where man has been waging wars to protect his sovereignty over the resources and to subjugate his enemies resulting in ‘Annadas’-from Spanish wars to the present. 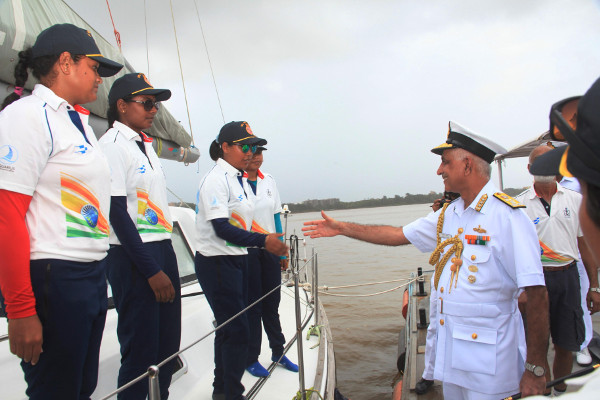 The Skipper, Lieutenant Commander (Lt Cdr) Vartika Joshi, and her five-member team comprising Lt B Aishwarya, Lt P Swathi, Lt Pratibha Jamwal, Lt Vijaya and SLt Payal Gupta were received by Vice Admiral Girish Luthra, the Flag Officer Commanding-in-Chief Western Naval Command. Present at the occasion were Senior Naval Officers and sailing enthusiasts. In the welcome remarks Vice Admiral Girish Luthra stated that this was a landmark event, wherein the team had undertaken the first ever open voyage by an Indian women crew. He further added that this achievement showcases the courage and commitment of young Indian women, and would provide a fillip to popularise ocean sailing in India.

The all-women crew of Mhadei built at Goa to a British design by local builder deserves full marks is presently training to undertake an expedition to circumnavigate the Globe, a feat achieved by lesser number of people than those who managed to climb Mount Everest. The first Indian to solo-circumnavigate the Globe on board Mhadei, Cdr Dilip Donde, has tutored and trained the young all-women crew. 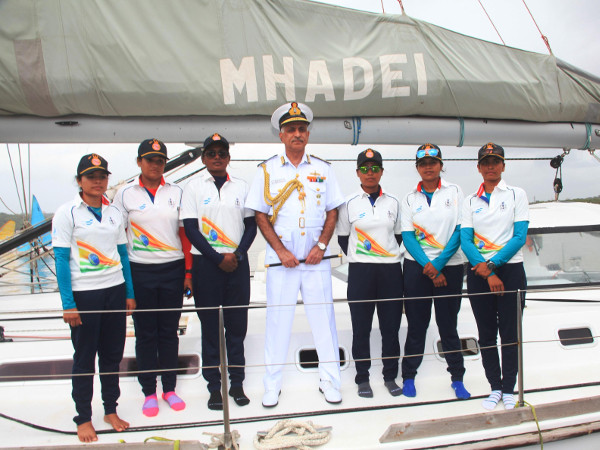 The voyage of over 40 days at sea was aimed at exposing the Skipper and crew to rough seas expected during the monsoon period in the North Indian Ocean. This was to prepare them for the very rough weather expected to be encountered by them in the Southern Ocean during their circumnavigation of the globe. The aim of this training voyage was adequately met and the all-women crew has proved themselves capable and competent at sea. The crew would now supervise essential repairs to the boat at Goa and prepare her for the next voyage, when Mhadei would be participating in the prestigious Cape to Rio race 2017 commencing from Cape Town on 26 Dec 16.

The all-women crew will thereafter shift to the new boat presently under construction at M/s Aquarius Shipyard Pvt Ltd, Goa. The New boat is of same design as Mhadei and has been named Tarini, after the river boat goddess of Goa. The keel of the boat was laid by the Honourable Raksha Mantri Shri Manohar Parrikar on 28 March 16 at Goa. Tarini is expected to be delivered to the Indian Navy in Feb 2017 prior to India’s first all-women crew embarking on circumnavigation commencing August 2017.

Two solo circumnavigations, the first with stops by Cdr Dilip Donde, and the second, non-stop by Cdr Abhilash Tomy, has been undertaken onboard Mhadei between 2009 and 2013. BZ to both and the women crew led by lt CDR Joshi. Shan No Varuna.

Previous Post: ITLOS DEBATED TAIWAN’S TAIPING & REJECTED CHINA’S SCS CLAIMS AS IT OFFERS TALKS/JOINT DEVELOPMENT AND COULD TAKE UP ART 298 ON TAIPING & ASSURES INDIA FREE NAVIGATION
Next Post: CNO RICHARDSON IN CHINA TO COOL TENSIONS IN SCS – LESSONS FOR DIPLOMATS DEALING WITH PAKISTAN AND CHINA’S MILITARIES IN TERRITORIAL DISPUTES FOR PEACE AND TRANQUILITY————- AT LEAST !