This is an IDF analysis of, “How and Why the Analysis of a War or an Operation”, helps to tweak or formulate a National Security Strategy(NSS) and define National Interests that India’s Intelligence and MEA have been struggling for, and it’s based on the adage, “Change is Constant”. The Government has not released any war records so IDF wonders how MEA and NSA tweak Strategy or is it Strategy on the run ?? China studies every war beginning with  the Gulf wars, to announce  its strategy to the world.

Operation Brasstacks, was India’s biggest strategic/tactical Tri-Service War game fought in a table top format in 1986’s winter on the Western front, and later practically in 1987 with 400,000 troops, aircraft and ships in the Arabian Sea, against Pakistan(Red).

Army Chief Gen Sundarji got the funds and clearances from PM Rajiv Gandhi and RRM Tri-pos scholar Arun Singh and Ministries to exercise the moth eaten, “War Book”, so Ministries could prepare for exercise Chequerboard with China  border in mind and nationwide Ex Brassboard, which got shelved. Media characterized Brasstacks, “bigger than any NATO exercise, since World War II, a blitzkrieg armour thrust into Pakistan aka 1971 Dash to Dacca.  Mechanisation of the Army is Sundarji’s legacy. 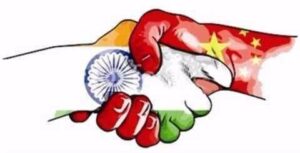 Operational teams for India(BLUE) and Pakistan(RED) were housed at Delhi’s Palam Parade ground with allocated forces(Orbat)), maps, naval and aerial charts and intelligence. It was the early days of computers supported by PM and Defence Mnister Rajiv Gandhi. All maps, Naval and aerial charts were computerised for projection by a US company on large screens to display the progress of the battle in real time. Red and Blue teams were segregated and watched over by the DGMT Lt Gen  Sunil Rodrigues (later Army Chief). His staff wore umpire/policemen armbands. Army units set up amazing tented bandobasts the Army is known far.

The Red Navy’s war fighting was assigned to the Directorate of Naval Intelligence (DNI) with Gunnery-Missile, ASW and Navigation specialists under this writer(DNI). Lt Gen VN Sharma Commandant of Army’s College of Combat (later Army Chief) a hard taskmaster was nominated C-in-C Pakistan.  Appreciations and war plans were prepared over three days. 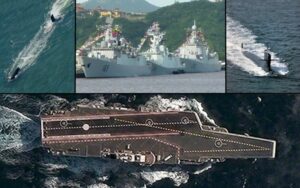 Radm SM Lakhar, the Western Fleet Commander, armed with plans and the  Fleet Staff arrived. They were briefed by NHQ. This writer(DNI) having been the Fleet Operations Officer gauged Lakhar’s mind(Ex CO INS Rajput) that the Fleet would rely on Navy’s missile power with P-15 and P-20 missiles(Trishul, Talwar, Rana and Rajput) with an aggressive dash to attack Karachi, Pasni and Ormara on the Makran coast as soon as hostilities broke, aka 1971, with lessons learnt thereof.

The PN Red team appreciated its Navy was inferior except in submarine prowess, so planned to keep the Indians at bay and bait the ships and carrier INS Viraat with Sea Harriers on approach, and not venture more than 165 miles from the coast, promulgated as an Exclusion zone. The PN ships were stationed in a tight semi-circular patrol. Four PAF Air Force Mirages/F-16 fighters from Badin were on call, and civil planes for reconnaissance were requisitioned with the Breuget Atlantics equipped with Exocets and torpedoes to co-ordinate and locate and attack Indian ships and submarines sans recognition in the zone. This was hampered by assuming Indian Navy will look for positive recognition.

Three PN Daphne submarines(aka sinking of Khukri 1971) equipped with Harpoons and torpedoes were stationed 75 km ahead of ships in patrol boxes mathematically calculated as taught in Russian Staff Colleges with 90 % success, called a ‘Cordon Sanitaria’.

The Red C-in-C Navy’s  plan, was approved by Gen Sharma to patiently draw the Indian Navy(Blue) towards Makran and then go for three dimensional Jehadi attacks. Pak Army Red Generals led by a friendly Maj Gen Nanavati this writer recalls among others, were told to be aggressive and maul the enemy with their Brigades and Battalions. Even a Navy man could appreciate the meticulous Army markings and plans on large maps on screens, with distances. 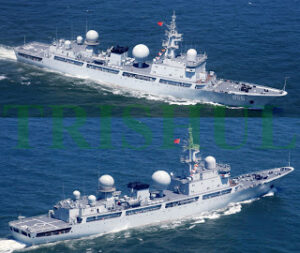 Every war needs a withdrawal plan. The naval team suggested a PAF aircraft be equipped with Pakistan’s nuclear bomb(reported by Kuldip Nayyar) be used as threat to get a UN cease fire as Navy has NBCD as a continent.  It was shot down by the Umpires.

THE ABORTATED NAVAL WAR ON D DAY AT PALAM

On D Day RM Rajiv arrived driving a SUV presented by the King of Jordan with Arun Singh. The Chiefs, few selected MOD, MEA and Intelligence officers had coffee and sat in front of a large screen with rear projectors for the presentation of Red and Blue plans in camera. The terrain maps and charts of the Pakistan coast line and Arabian Sea were computerized with units marked and explained how they would move in real time for Umpires to impose casualties and empirically work out damages, like in computerised war gaming centres. Rules of engagement (ROE) were made clear. Books have been written about Brasstacks.

The Pakistan Red Army Commanders’ and Air Cmde Johari presented joint plans. It was smooth sailing so far. This writer and a Cdr submarine officer presented the RED CORDON SANITARIA plan. It looked invincible on paper, and revolutionary on the screen with distances etc marked with ranges of weapons. That is when CNS Adm Tahiliani was seen conferring with PM and others. It was announced the Naval war game will not be played, and the Red team was sent home. It was puzzling, but the Red team realised if the Pakistani plan succeeded in Delhi it would not be good for Fleet morale, as word leaks to media  in India.   VCNS Adm Nadkani( the accidental CNS later), called us and told us war at sea is not played on Army screens, and not to take it to heart. 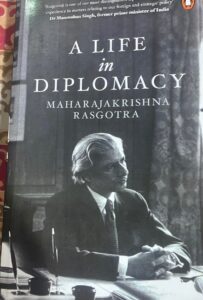 An Ops meeting was held and the Red plans were discussed and a template was made how to meet such a Cordon and any Pakistan threat in the future. From unclassified data it is analysed Navy decided to become a strong Missile Force with powerful air assets, speed up India’s nuclear deterrent programme under Project ATV and under water power and the Navy achieved its aim by the turn of this century with P-20s, Urans, Klubs and Brahmos missiles in 100s, and Derby missiles on Sea Harriers and submarines with Klubs. Brahmos was selected by the Navy from NPO Mash as Soviet Union collapsed and needed money.

In this century Navy has turned its spot light to the rise of China’s PLA(Navy). An explanation Navy’s current challenges by Aviation Defence Universe(ADU) is linked. Navy’s strategy was published but a futuristic strategy is given below in bullet points.

** Navy today with its surface platforms with Brahmos(Advanced) can sink a ship off Karachi from off Porbunder (400 km) in the East and has C4ISR to locate targets and tactics, which can be used in Malacca and Andamans if push comes to shove.

** Navy has adopted an Offensive Defence strategy for the IOR and a co-operative strategy with likeminded nations in the Asia Pacific which includes Middle East, and IDF commends.

** INCG is a capable support arm. CNS Adm Karambir Singh rightly suggested that some INCG OPVs from its 22 should join Navy for training ship duties and patrols at the IDSA. This must get traction.

** Navy should carry out table top exercises with MEA and Political leadership as Navy is a Strategic Service. Only then will Navy’s  role be appreciated by India’s strategy planners, as Army and IAF roles seem clearer to them after Kargil and Ladakh. MEA these days joins Army border meetings but has a superior attitude as Amb Rasgotra wrote in his autobiography and is  Chairman Emeritus of NMF.

** Navy should convince Air Force to jointly script an Air Sea strategy and Island security strategy for choke points for the Government and avoid lose talk.

** Navy’s signing of Lemoa and such logistics agreements need lauding and ports be used for OTRs.

**IAF has only 30 fighter squadrons. The Mig-21s will retire this year. IAF  budget may rise and Navy must go for exports as its life saver. It has begun with the Brahmos sale of over $ 350 million to Philippines and OPVs to Vietnam by L&T.

Link below is a primer on the Indian Navy’s challenges. https://www.aviation-defence-universe.com/cmde-ranjit-b-rai-retd-cmde-aj-singh-retd-brainstorm-indias-maritime-challenges-and-indian-navys-role-in-turbulent-times-with-adu/#.YfAde1p50DE.gmail

Previous Post: THE ROYAL INDAN NAVY MUTINY 1946 WAS A HARBINGER TO INDIA’S INDEPENDENCE IN 1947—IT IS RECOGNISED BY BJP NDA GOVERNMENT IN A TABALEU ON INDIA’S 72 ND RD PARADE WITH NETAJI’s TABALEU
Next Post: 2022-23 DEFENCE BUDGET OF 5.25Lac Crores IS PRAGMATIC —- IN 2021-22 ARMY SPENT ONLY 50% AND AIR FORCE 70% OF THE CAPITAL ESTIMATES—-NAVY 90% WHICH GETS MORE FOR MARITIME SECURITY