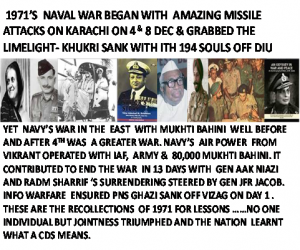 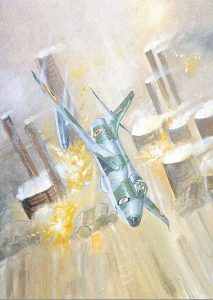 En route two 3 inch wire towing hawsers parted en route  Vishakhapatnam and splicing them at sea was a challenge which IDF as Executive Officer INS Cauvery reported to his ex  ND boss Chief of Staff Commodore M S Grewal requesting for spare hawsers. He called ND(V) whose constructors, after consulting Soviet guarantee specialists, installed Garware light nylon hawsers all round the Missile boats in clamps like a necklace, which made towing convenient with a easy release system. It was this successful innovation that generated an idea to enhance the range of Osas (literally ‘wasps’) from home base under tow to a target far away, then let the boats  loose at night for attack on Karachi. Even the Russians had never thought of this. The credit for the Towing Necklace goes to the Constructors which enabled Admiral SM Nanda and Vice Admiral N Krishnan to plan for the 1971 war. Facilities were set up for the “25th Killer Missile Boat Squadron” at Mumbai under Russian trained Cmde B G Madholar at Mankhurd who sent Lt P Bhasin to Porbunder to set up a small advance Technical Position (TP) to test missiles as the take off port.

Nanda employed the RN Staff College tri-appreciation, and asked his DNO Commodore O S Dawson, his NA Capt. V P Duggal and Vice Admiral Nilkanth Krishnan (appointed as Flag Officer Commanding-in-Chief Eastern Naval Command) for independent war plans. CNS Nanda the ‘Bomber of Karachi’, knew Karachi port well having worked there as a junior before joining the Navy, cited ‘boldness and secrecy’ as attributes in ‘India’s Principles of War’. Nanda dictated the key Operational Orders for the daring attack on Karachi to his HQ staff to a young relation sworn to secrecy and sent the charge documents (CDs) to Vice Admiral S N Kohli, Flag Officer Commanding-in- Chief Western Naval Command to exercise the Osa boats for the attacks, and informed PM Mrs. Indira Gandhi of his plans to attack Karachi. She did not object.

In a closed door Chiefs of Staff Committee meeting chaired by Gen Sam Manekshaw, Nanda asked Air Chief Marshal PC Lal for an air strike on Karachi at dawn on the first day of the war to soften Karachi. When Manekshaw found Lal regreted it, saying it would be suicidal till Badin radar was knocked out by MiG-21s, Sam said in Punjabi, “Chotta brah ek strike mang raha hai. De de,” (small brother is asking for just one strike, give it) and added “Marange to marenge, asi ladayi karan ja rahi hai, mohabaat nahi.” (Die if we have to, we are going to war, not to make love). Thus was the dye cast. 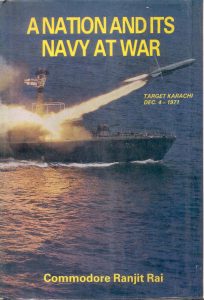 Air HQ tasked Hunters from Jamnagar for  Karachi on break of war, but OC reported Hunters would  not have adequate fuel for the task even with the drop tanks and only 20mm guns. Adm SM Nanda was determined and attached one missile boat to be in tow with  Rear Admiral Chandy Kuruvilla’s Western Fleet with INS Mysore (Flag Captain Russi Ghandhi) to lead the strike by operating  near  Karachi.

War was declared on 3rd December night when IAF airfields were struck as Mrs Gandhi leaked 4th as the date to Pakistan and told Chiefs to be ready. The Western Fleet was 120 miles from Karachi but the Fleet Operations Officer Cdr Gulu Hiranandani feared the Fleet was spotted on 3rd December by a small civilian Pakistani plane and though close to the Makran coast, steered away and failed to strike, and maintained radio silence belying NHQ expectations. Nanda was furious, and ordered the three Missile boats at Porbunder to strike Karachi by night and Lt Bhasin later Vice Admiral builder of INS Arihant tested the missiles and as none failed got a VSM. 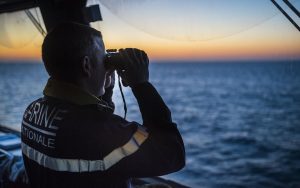 Don Conquest recounts, “As per SOP (standard operating procedure) we dipped off Karachi and fired a few rounds into the sea to test our guns. Mukherjee’s guns jammed, so three pressed on at 500 ft along the coast. As we neared Karachi , the large silver oil tanks on  the skyline, shone in the rising sun. We made two gun runs without difficulty and after the first, there were huge balls of fire and volumes of smoke coming out of the storage  with took off for Jamnagar having set the Kemari oil tanks on fire at around 0830 (PST)”. A Passing Out Parade was held at the Naval Academy with Iraqi Cadets too written up in Pakistan Navy’s History.

The IAF attack went unreported in India as the Hunters films were not immediately processed in the ‘fog of war’, and the Navy took the credit for years. Army HQ asked IAF for Hunters to relieve pressure on the Longewala post by Pakistan’s 38 Cavalry and 51 Bde. On landing the Hunters were armed and hurriedly fueled on landing, and flown  to Jaisalmer in Rajasthan to support the Army under attack from Pakistan. IAF saved the day and Wing Cdr Don Conquest was awarded a Vir Chakra for the Longewala operations.

The two missions in the opening bell of the 1971 war were big blows for Pakistan. The Navy, Air Force and Army went into Blitzkrieg action into East Pakistan with Mukhti Bahini volunteers, who had local knowledge of the terrain and Pakistani posts. On 8th December night the Navy repeated the missile attack off Karachi in Op Python and relit the fires on the Kemari tanks and attacked ships off Karachi. Lt Cdr Vijai Jerath (INS Nipat), was awarded the Vir Chakra.

Previous Post: WHAT YOU SHOULD KNOW ABOUT INDIA’S UNDERWATER NUCLEAR CAPABILITY NOW THAT PM MODI HAS ANNOUNCED INDIA HAS COMPLETED IT’S TRIAD & SECOND STRIKE IS OPERATIONAL
Next Post: 2018 WAS A YEAR OF DROUGHT WITH NO NEW SHIPS FOR INDIA’S NAVY BUT OPERATIONAL TEMPO WAS NOT LACKING AND INS ARIHANT PROVED NAVY’S ROLE IN INDIA’S TRIAD