India’s oratorical & confidence oozing  Prime Minister Narendra Modi well hosted the 10 ASEAN  seasoned leaders who have a tougher job than him leading their countries combined 1.8 bill people with $ 2.9 Trill economies. The ‘show sha’ and RD parade was outstanding as India is now rich to splurge money, but where & what was the substance is the question, IDF grapples with.

ASEAN   sees India not able to solve its poverty and now divisiveness as Padmavat was raging, experience  changes in policy and is unable to display  a strategy to deal with China and Pakistan, or reduce red tape. They worry.

Their concerns  will never come out in the open and Indian MEDIA REPORTED THEY FEEL INDIA IS NOT DOING MUCH FOR MARITIME SECURITY TO MATCH CHINA. This is only partly true as they look for stability more than a India China slanging match as China sustains their economy and business is inter twined. China has a clear cut policy to re-ascend the world and is the richer that USA or EU. 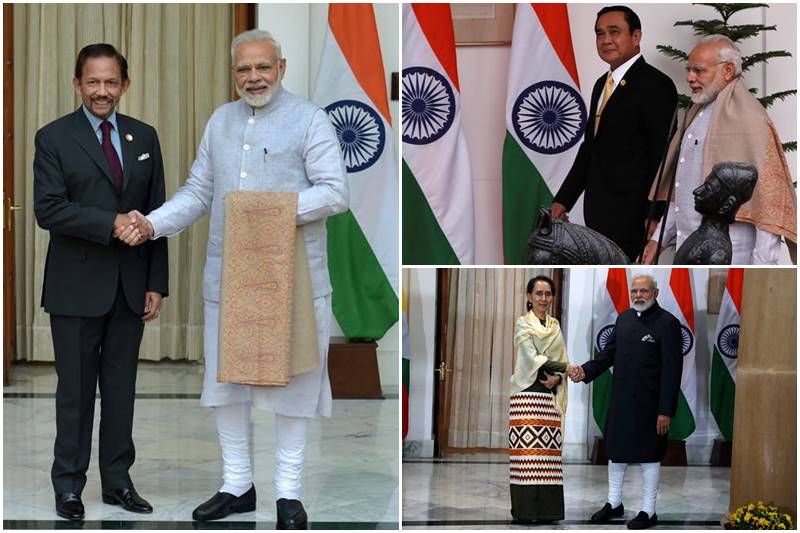 ASEAN know the 21st Century is   poised to be a Maritime Century and the litmus test of how India performs to protect its maritime interests and those of its  friendly ASEAN and Indian Ocean Region (IOR) nations as the Net Security Provider of the latter, is dependent on how India steers and peaceful balance  in the China-India power play in the Indo-Pacific. ASEAN wants to see India solve its problems  especially border with China and Pakistan and keep the peace.

ASEAN LEADERS  KNOW India  will never be at ease with Pakistan or China but feel India must manage the relations. This was the message IDF got and the ten ASEAN  leaders conveyed at Prime Minister Narendra  Modi’s Summit meet on 25th January.

Maritime security which includes issues of Freedom of Navigation(FON) and  China’s   Naval outreach and  claims over islands in the  South China Seas (SCS)  defying  UNCLOS  rulings,   and setting up of naval bases in  the Indian Ocean, silently  dominated.   However SCS was not mentioned in the Delhi Declaration  as Laos and Cambodia have broken ranks on the ASEAN Code of Conduct . Philippines Roberto Duterte has caved in with offers of  aid by President Xi Jinping  despite having the UNCLOS tribunal judgment in his  favour. 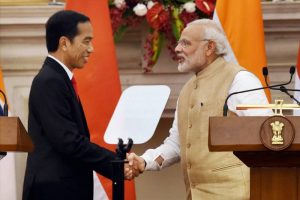 Much is expected of India’s Navy by ASEAN in India’s Act East policy.

In January 2014 PM  Modi  had signed a Joint Strategic Vision with President Barak Obama  to promote  peace, prosperity, stability and security in the Asia-Pacific and IOR to  energize  India’s ‘Act East Policy’ with  United State’s own pivot  to rebalance to Asia and  strengthen defence and regional ties. America  now expects  India’s Navy  to extend its maritime  reach and patrols   to the Indo-Pacific and President Trump has steered  a Quadrilateral (QUAD)  of  USA, Japan, Australia and India.

Currently the QUAD’s objective is limited to co-operation and  multi-lateral exercises like Malabar, Human Disaster Relief and Rescue (HADR)  and inter-operability. ASEAN worries QUAD will become an Asian NATO and France  wants in as Le Cinq (The Five) !

Dubbing  India as USA’s most important trusted defence partner, short of calling India an ally, President Trump expects India and its Navy to give the US Navy a hand in the East against China and is selling latest military hardware like powerful P8i maritime reconnicance and attack planes  with Mk 84 Harpoon ship attack and anti MK 48 anti submarine torpedoes and Sea Guardian Drones and F-16s.  Maritime Strategists in USA   look to realizing Admiral Mullen’s dream of a 1,000 ship Navy so that the  QUAD transforms over time to make it  a Maritime Security Pact like an ASIAN NATO and confirm a Cold war with China. 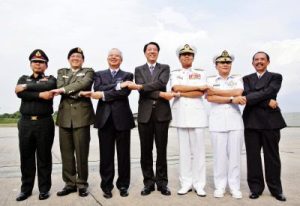 This worries militarily rising Russia,   which is  facing sanctions  by USA and Europe, and co-operates with China on many issues.  China  has flouted  its  economic and military power, to   demand and  acquire  its historical lands and seas  and set up  bases abroad. China has even thwarted India’s assertion in Bhutan’s  Chumbi valley  of North Dokalam,  with  construction and retains  its  presence there. Bhutan is worried.

Peoples Liberation Army, Navy and Air Force  are   poised to grow stronger, with bigger defence budgets currently reported at around $ 200 billion, increasing  7% annually.  At the 19th National Congress of the Communist Party of China  (CPC),  President Xi Jinping  heralded he would achieve  the China Dream and stated, “ China has  grown rich and become strong and will move towards the  center stage and make greater contributions for mankind by 2050”. China looks  to  re-ascend to the top of the world. 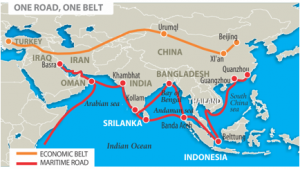 The PLA (Navy) added fourteen new warships and submarines in 2017 after sixteen in 2016 to its  three hundred warships and fifty submarines. China  has  commissioned its second new powerful Jiangkai Type 54 destroyer this year and is readying  its second indigenous aircraft carrier named Shandong  and begun construction of its third 80,000 ton aircraft carrier, dubbed CV-18 at the Shanghai Jiangnan Shipyard to operate the  Shenyang J-15 aircraft.  Indian Navy  added  only eleven  warships in the same period to its one hundred and thirty five. Many warships and  submarines are aging beyond twenty five years and need replacement. Indian Navy needs more modern sea legs, to deter any nation or fight a 21st century war.

China has rented a base in Djibouti and built a jetty  and has commercialized  Gwadar as its captive entre port in the warm waters of the Indian Ocean astride  the Hormuz Straits,  which sees transit of oil for the world. China  is helping build  a submarine base at Ormara for the eight submarines it is supplying to Pakistan and plans to set up   a listening and radar post at Jiwani next to Chahbahar,  to keep watch over  India’s  links to Afghanistan and the Central Asian Republics(CAR).  China is supplying  Yulin class  missile frigates and supplies of  C602 anti ship missiles being  fitted on Azmat class missile ships being constructed at Karachi Shipyard Ltd  in numbers. PLA (Navy) is fast becoming India’s neighbouring  Navy. This will make it   difficult for India in the years ahead  to dominate the IOR, especially if the $ 56 billion China Pakistan Economic Corridor(CPEC)  investments in Pakistan fructify. It could make Pakistan more belligerent to India as PM Modi has demanded POK back and that worries China.

In the SCS,  China has defied  UNCLOS rulings and broken  ASEAN’S Code of Conduct  to make  its illegal presence  permanent in SCS with reclamations of rocks in to large  islands with airfields and missile bases.   Only  Vietnam among the claimants  to SCS remains  publically opposed to China and looks to  India’s support in the SCS, and India looks to OTR Operational Turn Around like in Singapore . Nguyen Xuan Phuc  in a bi-lateral cleared  more  agreements this time. Vietnam had earlier signed  a civil nuclear cooperation agreement with Prime Minister Modi in December, 2016  to strengthen the comprehensive strategic partnership.

The small less than a large  Army Corps Indian Navy  has done much   but after Dokalam seems to be put on the back burner with canceled RFP too. The Naval Design Directorate (DGND)  designed platforms, the Weapons Electronics and Engineering Establishment (WEESE) has supported  electronics, software and communications and the DRDO-Navy’s sprawling  Defence Machinery Design Establishment (DMDE) at Hyderabad  tests equipment before fitment in submarines and warships.

Admiral Lanba  included five Naval OPVs which are nowhere in sight though ordered on Reliance Defence at Pipavav Shipyard in 2008. The  construction of five Catamaran Survey Ships with Konsberg Under Water Vessels (UWVs)  at Alcock Ashdown Bhavnagar  has closed down,  and the matter of construction of three training ships ordered at ABG Surat is  in court. OPVs are being converted  as  training ships. Hence there is a certain   uncertainty of the number of ships on order. This is worrisome. Some one should shout  for  the Navy and IDF looks to a bigger Defence budget around 2.5 % of GDP to make Navy get a bigger cake. Sam  No Varuna !

Previous Post: CDR JADHAV UPDATE—PROPOGANDA & AND SPECULATION WHETHER HE IS A BUSINESSMAN WILL BE ADJUCATED BY ICJ ON EVIDENCE BUT AFTER ACCESS AS IN ARTICLE 36(1)(C) OF THE VIENNA CONVENTION ON CONSULAR RELATIONS
Next Post: PART 1 ANALYSIS OF ECONOMIST ARTICLE SAYS — INDIA’S ARMED FORCES – A PAPER ELEPHANT- INDIA SPENDS A FORTUNE ON DEFENCE AND GETS POOR VALUE FOR MONEY