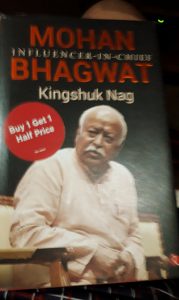 In the last century nine US Presidents came from their MILITARY( Bush Snr, Nixon, Carter Johnson, Kennedy, Roosevelt from the Navy. Eisenhower and Truman were from Army and Bush Jnr from the National Guard. No wonder USA remains a Super Power and IDF hopes the trend of Indian officers who are joining politics will take India to such heights. IDF’s books on Indians (see photo) explains that it will not be easy and will need integrity and dedication and example which service officers have in abundance to cleanse the system.

This is also an IDF Analysis of the symbiotic connection of RSS with BJP and is a Salute to Senior Servicemen for believing in the RSS Philosophy to join BJP to propel Hindutva and build a Ram Temple and enact the Uniform Civil Code and remove Art 370 and 35A to make India a composite nation with no privileges in states like in Kashmir, Himachal, Daman, Diu and Goa etc or any special privileges’ for religions (Haj or Temples or Churches) and even grants to Madrasas or to any castes and support prohibition, cow slaughter and enforce a national beef ban for purity.

IDF quotes one of the finest Indian biographers Kingshuk Nag whose biographies are read worldwide. His biography of MOHAN BHAGWAT the SARSANGCHALAK of RSS (like a CDS) is INDIA’S INFLUENCER IN CHIEF he explains. BHagwat’s power is more than the Indian Army. The numerical strength of RSS in terms of Swayamsevaks would be close to a crore, but the real Strength of RSS/BJP members, Nag writes, lies not only in its numerical strength but its conviction and resolve in its belief and values and its unapologetic stand on Hindutva and Hindu values and heritage as India’s history has been distorted by the British. This needs correction.

Kingshuk writes. “unfortunately, the Sudarshan years (predecessor of Mohan Bhagwat) –was feared by PM Vajpayee –marked a low in relations between the RSS and BJP.” (Page 23). He explains how in the 2014 elections the mass and support of RSS catapulted Narendra Modi as PM. RSS choice was Nitin Gadkari as PM but the Parti Scandal looked worrisome and oratory of PM Modi and his assurances emboldened them . Kingshuk has predicted RSS will back BJP and Modi fully in 2019 elections.

Nag writes Bhagat has modernised RSS with technology and new uniforms and used diplomacy to even get Congress Pranab Mukherjee to praise RSS. In Kingshuk’s words, he has explained how RSS wants India to be a Hindu Rashtra, with SAMAJIK SAMRASTA for SEVA BHARATI (that Chetwoode advised). The introduction of Uniform Civil Code, removal of Art 370 and 35A and inclusion of POK with VASUDHAIVA KUTUMBAKAM will make BHARAT a VISHWA GURU, as given in our scriptures is essential.

Nag writes;- “ One of the reasons for the smooth relations between the RSS and BJP is the nature of work performed by the two is different and is recognized by both. Bhagat knows Modi’s job is to run the Government in such a way BJP is voted back in the next general (2019) election. At the same time Bhagwat’s job is to create a Prakar Hindu Rashtra. Bhagwat realizes it is possible if BJP is voted back to power. This is why RSS provides organizational support to the party with men and material. On getting elected as BJP President in July 2014 Amit Shah called on top RSS officials, including Suesh Bhaiyyaji Joshi, Suresh Soni, and Krishna Gopal. The agenda included discussion of the proposed team of new governors and officials and socio-cultural bodies.” (IDF sees this in cash rich Think Tanks and who they invite and spend funds on). 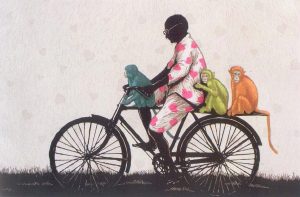 Surely, those joining BJP after shedding uniform are experienced war hardened officers and have belief in BJP/RSS goals. Only then, they believe India can India rise. One like Gen VK Singh who has performed well in MEA could be made Defence Minister and hope MOD can appoint a. CDS to hone the prowess of the third largest powerful sacrificing Army, fourth rated Air Force and fifth rated Navy in the world to join India’s economic rise to Multi Polarity and check China in SCO and join the QUAD, if Cabinet feels it is needed. The Integrated Defence Staff (IDS), the DIA and SFC are waiting for a CDS to attend to them and relieve NSA somewhat and let service Chiefs to attend to their service.

The 1 4 million strong Indian Army is the glue that has kept India one. IAF is a support first action service and the Navy is a strategic force for India’s rise but must note times are a changing. High Technology like a Spyder AA missile not missing a MI-17V5 is driving Actions, Doctrine and Strategy. Dedicated man power alone that India has relied upon in the past cannot be called strength. 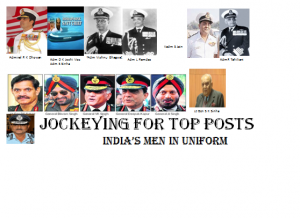 Sadly the fine Indian Army has borne losses as regiments see this as pride. They were let down in the wars of 1948 with a cease fire and forgot Col Ranjit Rai’s maneuver to Baramulla that got 2/3rd of Kashmir. In 1962 war the PM and Cabinet did not use the Indian Air Force while forcing a flawed a Forward Policy on an ill clad brave Army. In 1965, the Cabinet did not know how to use the Indian Navy and let it idle and brought in Air Force suddenly and gave in at Tashkent. In Parkaram when a Strike Corps Commander executed a maneuver to the border as inked in the Navy Doctrine BR 8 after Nelson proved it at Trafalgar, the Government on US pressure removed the Gen named Vij. His Corps turned back and Army sadly lost 800 souls like 1400 that had died in Op Pawan. In Kargil in 1999 the Army fought with what they had as Gen VP Malik honestly stated. India’s best weapon then was the bravery and the lives of the finest junior ranks in the world. PM Vajpayee wanted urgent results at any cost. Army had no time to maneuver assets like Guns, Scouts or wait to starve the enemy or use alternate maneouvres.

All above actions were fought with ATTRITION WARFARE. Only the 1971 war was fought by the Army Chief FM Manekshaw as a CDS with JOINT MANOUVER WARFARE but the Government or Indian Army never learnt the lesson and lost all at Simla. Gen Bipin Rawat is re-organising the Indian Army and commands without the glare of the media. Even Balakot attack saw jointness and secrecy. Veterans in BJP will support. .Masood Azar has been declared an International Terrorist to help Indian Army to quell terror.

Officers from IMA rever Field Marshal Philip Chetwoode who was the C-in-C instrumental to Indianise India’s Army by setting up the IMA and he inked the Chetwode motto, which stirs much passion. Excerpts below:

“We (Indian Army ) have got the men who will serve under you in the ranks. No better material exists in the world, and they have proved it on many stricken fields; but hitherto they have been led by us, and now they are to be led by you (Indians). I would ask you to remember that you have come here to have your first lessons in three principles. First, the safety, honour and welfare of your country come first, always and every time Second, the honour, welfare and comfort of the men you command come next. Third, your own ease, comfort and safety come last, always and eve

Lt Gen JBS Yadav, said, “I would like to thank BJP and its national president Amit Shah who have honoured us by making us members of the party.” We promise to follow, ‘The vision of the Prime Minister to deal with internal and external security challenges which has also been extraordinary,’ they added. Shan No Varuna.

Previous Post: INDIAN NAVY SAW CHINA’S ADVANCES & TYPE 55 DESTROYER & NUCLEAR SUBMARINES AT PLA’S 70TH ANNIVERSARY BUT BOYCOTTED BRI AGAIN HOPING CPEC FAILS ! WISHFUL THINKING AS A MODIFIED BRI SEEMS MOVING WITH NEW CHINESE IDEAS —-NO START UP OR OBOR OR NO ROME WAS BUILT IN A DAY !
Next Post: 27th FEB SAW SURPRISE SWIFT RETORT BY 24 PAK AIR MACHINES AFTER THE BALAKOT ATTACK ON 26TH BY IAF —THIS WAS NEAREST TO WAR DISCUSSED IN STRATEGIC CIRCLES WORLD OVER AS CBMs & GLOVES ARE OFF & MISSILE USE THREATENED BY PM MODI IF PAKISTAN DOES ANOTHER PHULWAMA & PAKISTAN VOWS RESPONSE !