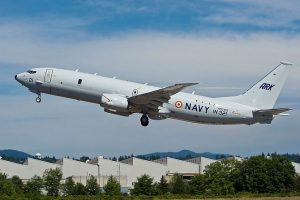 This IDF post is   a maritime analysis  inquiring of   the state of current sovereignty of the Parcels near Vietnam, and Spratly Islands near Philippines,  called the South China Sea (SCS). Three other nations have lesser claims.

With superior reclamation technology China has rocks turned in to fortified  Islands in the SCS  and opened them to tourism, fishing and exploration from Hainan and Haikou.  SCS has gas and oil called the Blue Economy. China has dipped in to its deep pockets, and guards the SCS with its rising PLA (Navy) and taken over the Coast Guard.

New laws for base sea boundary lines extending to islands were introduced in UNCLOS and China set up three  full Maritime Universities at Dalian, Shanghai and Jiangsu  for Maritime Law and to study SCS.  Many claim Bangla Desh and  Myanmar consulted Chinese experts in their claims which concerned India and it helped. Even Pakistan did,  to further its  claims for extended EEZ in UN’s Commission on the Limits of the Continental Shelf. Pakistan was the 13th nation to stake its EEZ claim as having deeper waters than India, and has got a favorable resolution which will have  significant strategic consequences.   India took time to submit its claims to be heard in sequence for final dispensation.

On SCS in the  ITLOS arbitration, China issued a Non Paper purposely in poor English to confuse, in its defence. Philippines claimed the Spratlys citing Jurisdiction and won in 2016. Taiwan which has the original Chinese 8 Dash Line Chart it is rumored, owns the largest island called Taiping (Ibu Itu) in the SCS was not allowed to put forth  its claim, or even  attend proceedings not being a member of UN. Its Press Statement in 2016 needs study.

Taiping Island is an island, not a rock, and the ROC possesses full rights associated with an exclusive economic zone (EEZ)  and continental shelf in accordance with UNCLOS

“In recent years, parties concerned have continued to be at odds over sovereignty disputes in the South China Sea. In January 2013, the Philippines initiated arbitration against mainland China concerning the South China Sea in accordance with Annex VII of the United Nations Convention on the Law of the Sea (UNCLOS). During the second hearing from November 24 to 30, 2015, the Philippines distorted the facts and misinterpreted the law to argue that Taiping Island is a rock and not an island, and that it therefore should not have any maritime entitlements beyond 12 nautical miles….. Taiping Island, with an area of 0.51 square kilometer, is the largest naturally formed island in the Nansha (Spratly) Islands, can sustain human habitation and economic life of its own, and meets the criteria of an island as defined in Article 121 of UNCLOS.”

China has refused to accept the 2016 ITLOS verdict from Hamburg. It   ratifies  the dictum that in foreign policy morality rests with the powerful. USA took over New Mexico, kept Red Indians in reservations,  Britain held Hong Kong, Pakistan took over Baluchistan in 1948, China  took over Tibet in 1959, India took over Goa in 1961  and more recently Russia took over Crimea.

India’s move to Sikkim and India’s move to break Pakistan into two in 1971 was again in National interests. It shows ‘Power Talks’ in justified cases and that needs economic and military power. China has economic power and is building military power which worries President Trump and India too,  with China’s  truck with Pakistan.

China has a large expanding Navy to patrol the SCS and even sailed it’s 70,000 ton aircraft carrier Liaoning with homemade  J-15 jets, which have had two fatal accidents as too heavy,   and exercised in the SCS waters, and shoos away the US and Philippines Navy ships if they enter the SCS rocks claiming them as  sovereign territorial waters of 12 nautical miles  as per UNCLOS, (One NM is 2000 yards).  J-15s are being replaced by J-31s when ready and second carrier homemade Shandong is getting ready to patrol further with submarines.

China  claims  SCS with a  heritage clause on a grandfathered 8 Dash Line which chart it is said to be  with Taiwan and China misquotes  UNCLOS 15 quoted below and wants mutual delineation with nations in the dispute and asks USA and others to stay clear. Note the word Historic !

Delimitation of the territorial sea between States

With opposite or adjacent coasts 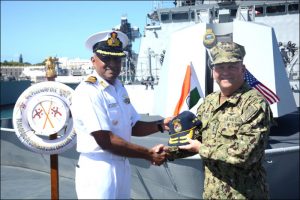 Power talks. No one wants war in nuclear times, so a trade war is being attempted. The US Navy regularly sends a medium warship and a plane to make a passage in the 12 nautical mile limit in SCS as innocent passage allowed by UNLOS but China wants to limit Article 17  of   innocent passage to White (merchant) shipping only, not warships  to show sovereignty.

US Chief of Naval Operations (CNO)  Adm John Richardson has  warned,  the powerful US  military is facing rising competition from Peer and near Peer nations.

The CNO’s message, was conveyed by the Senior most Sailor, a practice USN follows.  “ if you haven’t heard it or don’t understand it, means that there are navies out there that have very capable ships, submarines and aircraft that can hurt USA so the kind of warfare we need to start preparing for is very different than the kind we’ve faced over the past 17 years — we’re likely to face maritime threats in the future the likes of which we haven’t faced since World War II.” The bottom line as trade war rages between China and USA is clear to IDF;  Prepare yourselves and your sailors now, because all of your future depends on it.

To show spite, US Lt. Col. Logan announced the PLA (N) would not be participating in the RIMPAC 2018,  citing actions in the SCS Sea that run counter to international norms and a pursuit of free and open seas, “The United States is committed to a free and open Indo-Pacific. China’s continued militarization of disputed features in the South China Sea only serve to raise tensions and destabilize the region. As an initial response to China’s continued militarization of the SCS we have disinvited the PLA Navy from the 2018 Rim of the Pacific (RIMPAC) Exercise. China’s behavior is inconsistent with the principles and purposes of the RIMPAC exercise.”

Logan added.  “We have strong evidence that China has deployed anti-ship missiles, surface-to-air missile (SAM) systems, and electronic jammers to contested features in the Spratly Islands region of the South China Sea. China’s landing of bomber aircraft at Woody Island has also raised tensions. We believe these recent deployments and the continued militarization of these features is a violation of the promise that President Xi made to the United States and the World not to militarize the Spratly Islands.” 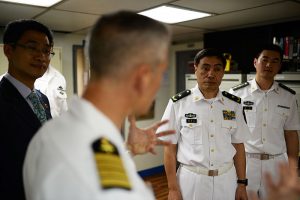 China participated in the 2014 and 2016 RIMPAC with four ships and another spy ship with Indian and 25 Navies and gained a lot of experience.  It was Def Sec Ash Carter who had invited PLA(N) to join despite tensions at the time in SCS, with countries like India and Vietnam and said, “that we don’t have decades of experience with India , like the Philippines; they’re all coming to us, in part because they’re concerned about China.” RIMPAC  has back fired and QUAD has formed!  Indian Navy  fielded  MSDL built INS Sahyadri and a P8i off Hawaii.   Vadm  John Alexander, CTF  RIMPAC 18 visited INS Sahyadri at Pearl Harbour on 27 June 2018..

The lesson for India is power talks. Indian experts claim Indian Navy has more capability than the PLA Navy which has only capacity. IDF met and questioned  maritime friend Tai Meung expert from San Diego who follows PLA (N) who was in Delhi and gave talks to think tanks about the two navies. He spoke  like the CNO, “ PLA(N) now has capacity and capability, but lacks experience which Indian Navy has”.

On TAIPING claim by Taiwan which could one day help China if Taiwan joined China in ITLOS, he said  the JURY IS OUT for a re-look. There  are lessons for India’s maritime power needs. In Hindi it is said, “ JIS KE LATHI  USKE BHAINS” ….The cow belongs to the man who has the stick. Shan Na Varuna.

Previous Post: THE ADMIRALS OF THE NAVY WHO OCCUPIED THE BIG WHITE CHAIR IN SOUTH BLOCK & ARE NO MORE NEED TO BE REMEMBERED WITH THEIR CONTRIBUTIONS TO THE RISE OF THE INDIAN NAVY—ADM JG NADKARNI WAS KNOWN FOR OP GODSAL –A SEAMANSHIP TASK WELL DONE SIR BZ ! RIP.
Next Post: INDIA TO SIGN QUID PRO QUO COMCASA FOR WAIVER FROM CAASTA TO BUY S-400 MISSILES & REDUCE RELIANCE ON RUSSIA WHEN 2 PLUS 2 MEET IN DELHI –USA’S GOAL TO WEAN INDIA AWAY FROM RUSSIA ENTERS THE LAST LAP. USA’s STRATEGY ?