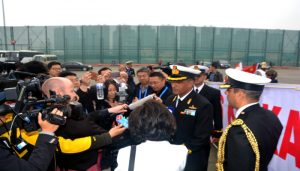 IDF Analysis of IFR and China’s meteoric rise which is turning the world Bi-Polar & 30% of China’s BRI will succeed as China’s vehicle of Globalisation and 70% will enable China’s Global ambition like the Marshall Plan did for USA with debt diplomacy.

PLA chose an International Fleet Review (IFR) to celebrate PLA’s 70th Anniversary and 7200 ton Type 15A INS Kolkata (Capt Arya widely shown on Chinese TV) and tanker Shakti entered Qingdao on 21st April to participate in the Celebrations and naval Reps were addressed by President Xi Jinping who reviewed the 64 ships (25 foreign and rest Chinese) and 40 aircraft on 23rd on a terribly hazy morning but cameras did a good job to show every ship as Xi shouted BZs in Mandarin. The Indian Ambassador to China, Shri Vikram Misri, hosted a reception onboard INS Kolkata for dignitaries, and officers of PLA (Navy) and delegations participating in the IFR. Navy’s receptions are very good and appreciated.

Indian Navy’s official MOD statement stated, participation of Indian Navy in IFR, for third consecutive time (2009, 2014 and 2019), is a demonstration of the Nation’s commitment to enhance maritime cooperation between the two navies and bolster bonds of friendship between the two Countries. The Indian Navy has deployed its finest assets for the IFR with an aim to strengthen existing cooperation, enhance mutual trust, extend interoperability and build greater synergy to address common maritime concerns among participating navies. The Indian Navy’s 800 officers and men and Ambassador and officers who report from the Mission, must have seen Chinese naval power, their amazing uniforms and drill with new movements on parade, and the 8,400 Type 055D latest Destroyer with long range missiles and all below deck stealth and powerful submarines sailing past and will report to NHQ as per the CNO. 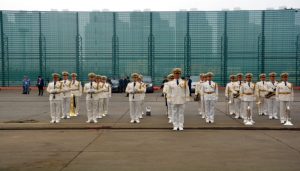 Seven 055Ds are in building with many 054 Frigates. China believes in series building where speed of construction is their hallmark with same team doing same job on each class of ships which also brings in economy. Indian Navy runs varied types of large ships with different gas turbines and weapon fits Type 15s, Krivacks Shivaliks with Rajputs and B’putras and Kamortas and four types of submarines, not easy to maintain, so will need series production and common systems which L1 and DPP do not allow.

On BRI note, Japan too rose with Cheque Book Diplomacy after WW 2 with deep pockets but the self defence stricture in its Constitution Article 9 by USA clipped Japan wings and USA provided Japan a Nuclear Umbrella, now debatable. India and Pakistan have their own nuclear umbrellas which Pakistan claims is for CPEC with Red Lines if anyone tries disruption!. India is in SCO with China Russia Pakistan while USA is wooing India with offers to take over manufacturing from China and join the QUAD. A lot will depend which bullet will India bite which will challenge India in the years ahead as BRI meet in Beijing has more takers than before with 37 Heads of State and  Xi Jinping unveiled a softer BRI and listed achievements.

China has been trying to woo India after Wuhan that IDF understands was a private standstill summit over Doklam and borders for time more with understanding of each leader, of what was discussed. Was it Hindutva Hindi Chini Bhai Bhai but CPEC/BRI  is a sore for BJP as it brings Kashmir with Article 370 and 35A removed and later take POK back if Pakistan wilts and military assures its feasible. . 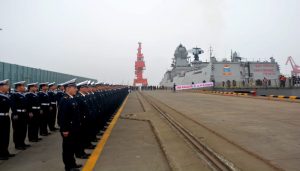 China’s BRI progress will definitely be bumpy as it is over ambitious but China can afford a trillion $ gamble to win, as long as its capital is used to help  make captive friends like Pakistan, Laos Cambodia Greece Sri Lanka etc and is what USA did to rise ! China now is pumping in money as a big investor in India’s Internet companies in billions; Indians use more Chinese mobiles; India uses Chinese tunnel boring and power sector machines the best and cheapest in the world and even defence companies import raw materials from China, Hong Kong and Taiwan. Huawei keeps Indian mobile companies talking so for India to stump China will not be easy to derail BRI, which USA would love.

Delhities know China has the largest Embassy space in Chankaypuri and visitors see wide roads and squares in China built even when it was poor. China thinks big and does what it thinks through has a possibility. The leader Lion King Xi gets support from its people looking for the China Dream as it has a one party benevolent rule and does what is good for the majority and the Nation. Some suffer. RTI and Writs are few. China also allows people to become  rich quick as money is considered happiness in the Chinese lexicon.

In India, leaders have to do what pleases the electorate and politics seems a money making business as Elections and Election bonds and seizures show. To catch up or stump China will not be easy as the gap is big with $ 13 trillion GDP of China with 6% growth and poverty removed vs $ 3 trillion of India at 7% growth with poverty and job and agricultural distresses. Today China’s space, engineering, aviation  and naval technology is nearing USA’s and its hardware and Silicon valley has overtaken EU with Cyber and AI companies challenging world competition. China’s heavy vehicles, and bus building technologies are world standard and automobiles are improving. Motorcycles are not allowed as large heavy high speed electric scooters are preferred and Climate Change is being combated. In India with discordant states and Centre policies are difficult to implement. Yet BJP is asking for majority to seize the India Dream and wants to be led as by Putin,Trump, Erdogan and  Xi Jinping in a Presidential mode.

At BRI Conference China has offered a strategy to modify BRI with Debt Diplomacy to others with private participation too on lines it took over Hambantota on 99 year lease. Imran Khan says Gwadar is no more a village and is humming with business and will have Pakistan’s largest airport by 2022 and Malaysia has agreed to China to cheaply build East Coast railway from Port Kalang to Kuantan for business . Maldives airport opened its Chinese built Code F runway at the Velana International Airport and Sinamalé Bridge that links the islands of Malé and Hulhulé and the jetty at Djibouti is ready for business. 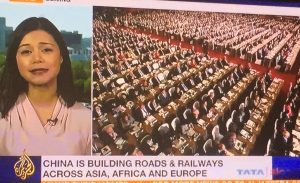 BRI Is all about connectivity and infrastructure and CPEC is moving and China will not forsake its investment in Pakistan. Our children may see PLA(N) ships and China’s planes in Gwadar and submarines in Ormara like Japanese and Philippinoes saw them in Yokosaka, and Subic and planes at Clarke’s Air Base! The name of the power game in the 21st Century if Mahan and Dr Pannikar’s predictions are to be relied on for strategy building, is that the key to the future of the world lies in the Indo-Pacific with India’s maritime geography which is its attribute and India’s consuming talented population.

Therefore India’s Navy is the likely swing service as India is in the SCO with CHINA and RUSSIA and the QUAD with USA and JAPAN and will have to decide where it’s priorities lie to wield strength as Non Alignment is not an option. A lot will be maritime and India should not miss the bus that China has begun with the BRI and MARITIME SILK ROUTE (MSR) which is being reviewed in Beijing with 37 heads of states and 100 official delegations and many non official delegations and Indian media is in strength.

Previous Post: ITS RAINING IMPORTED VAJRAS/777s/ATAGs/ AK-203 GUNS TO MEET CHINA WITH ALGs & 24 APACHES &16 CHINOOKs & 36 RAFALES & SU30MKIs BUT HOME BUILT NAVY’S EXPANSION IS SLOWED TO 27-PLATFORMS FROM 44 & DELAYED—CHINA’S PLA(NAVY) VOWS TO LOOK LIKE US NAVY IN 15 YEARS WHEN ITS BRI/MSR & SPACE PLANS FRUCTIFY—–XI JINPING EXTRACTED TIME AT WUHAN??
Next Post: MILITARY INCLUDING TWO EX CHIEFS & A VICE CHIEF HAVE JOINED BJP TO ADOPT ITS PHILOSOPHY TO PUSH HINDUTVA & HOPE IT IS NOT TO LOOK FOR GOODIES FROM BJP & ARMY IN RETIREMENT ! IDF IS SURE THEY WILL SELFLESSLY FOLLOW THE CHETWOODE SPIRIT & SERVE INDIA TO RISE