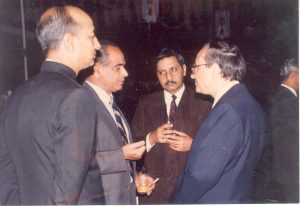 IDF REPRODUCES A CHAPTER FROM A BOOK ON THE DRACONIAN ARTICLE 311/312 UNDER WHICH ADM VISHNU BHAGWAT WAS SACKED ON 30TH DEC 1988 WITH NO RECOURSE TO COURTS AFTER SUCCESSOR WAS SECRETLY FLOWN IN BY A RAW PLANE ALL PLANNED BY LATE GEORGE FERNANDES AND SUPPORTED BY PPS SECRETARY TO PM VAJPAYEE BRAJESH MISRA THAT  CM JAYALALITHA USED TO TOPPLE THE BJP GOVERNMENT—-MOST FOREIGN CHIEFS READ THE BOOK ! ARMED FORCES DO NOT KNOW HOW ART 311 IS USED AS A SWORD OF DAMOCLES !

George Fernandes, the well-known spectacled labour leader, with a mop of tousled grey hair, invariably clad in khadi kurta-pyjama even on most formal occasions, was born on 3rd, June 1930 in Mangalore, which is now in Karnataka.  His long rough and tough political career was spent in Bombay leading trade unions in Bihar with the Mafia amongst others (IN MDL ALSO BESIDES RAILWAYS)and in New Delhi opposing the Nehru Congress family dynastic rule with dogged stances from the opposition benches. 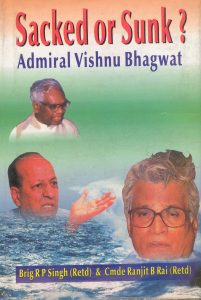 He took over as India’s thirtieth Defence Minister on the 20th of March 1998 in the BJP coalition Government and is the President of the Samata party, which has 5 members in the Lok Sabha though Kalpanath Rai has deserted him. Mrs. Jaya Jaitley, a close associate and friend of George, is the Secretary of the Samata party.  Fernandes has had a rich but brief experience of being the Minister of Communications, Industry and Railways and so he knows what Minister-ship is all about when he took office. He was no green horn when he took over defence, but it must be remembered he berated General Rodrigues when he made the statement that good governance was also the Military’s responsibility, and George extracted an apology. His present term as Defence Minister was thirteen months long and he sacked the 13th Chief of Naval Staff Adm Vishnu Bhagwat and that act will haunt him for a long time to come. It contributed to the fall of the BJP Government. He went on TV nationwide in mid April, for full 90 minutes, to explain his reasons for acting the way he did, for which earlier he had said he felt miserable, but a poll showed the nation was not fully convinced. As a journalist put it, George is always on the wrong side of the establishment, and his tenure in 1998-99 in the Government will go down as the most controversial in management terms. He has not been able to explain his action against Bhagwat cogently and has hidden behind the fig leaf of National Security while dismissing a Chief in a coup like operation. He also drew small swords with the Air Chief Marshal S.K. Sareen, the ex Chief of Air Staff, who accused the Ministry for not defending him against charges in the media, and also riling up the Shantushti shopping complex issue which is still to be resolved between the Air Force Wives Welfare Association and the MOD. 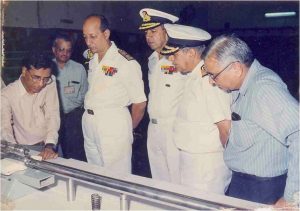 Many indications are that Fernandes used his Defence Secretary Ajit Kumar and the Director of Defence PR to fire his many guns, and so in the bargain much dirty linen on arms dealings especially about Crown Corporation and a company called Makalu which supplied Navy spares has been aired in the media.  The name of Rear Admiral S. Purohit also been figured, has been aired in the media. Some is fact some is fiction and the problem began when Rajiv Gandhi banned arms agents, which in reality is not feasibility and was a fig for other means that led to the Bofor scandal that derailed Defence modernization .

George has faced charges of being a supporter of the LTTE by Jayalalitha and others, harbouring Burmese dissidents in his residence and and conniving to permit supply of arms at times flow to the North East area of India (Op LEECH) but he has always taken such charges in his stride with alibis. The Burmese students who live with him were picked up on his way to Parliament, he has stated on TV, and a relief agency pays for them and so claims innocence. But, is it proper to house aliens in Government accommodation?  He denies the LTTE connection. He has spoken a lot about an Inter service Operation Leech in the Andamans. It was a botched up operation and reads like the Samba case, where one side the Defence officials did not know what the intelligence agencies were doing and innocents got embroiled. Bhagwat has gone on record to ask that reports of the personal dossiers of Fernandes available with the Intelligence Bureau and RAW, which are routinely kept on important personalities be bared along with his. As Fernandes has been named in the Baroda Dynamite case to blow up railway tracks and union activities there are bound to be dossiers at least of the past. If that happens it will be historic to release such data which every nation guards to the hilt, because it is privileged information for good governance, and not for public disclosure.

In August 1998 I recall Fernandes as the Chief guest came to the NCC Annual games opening Ceremony March Past at the Jawahar Lal Nehru Stadium over twenty minutes late and did not utter a word of apology for keeping the 1500 cadets, VIPs including the Chiefs waiting. As commentator for the event I kept the crowds amused and when I asked his aide if I could offer an innocuous apology on his behalf, he said this Minister has no reason to apologise, he is a very busy man and the crowd should understand. He is the only Minister not to have inaugurated a Commander’s Conference because of pre occupation with political matters. That sums up tenacious George who believes all he does is right. In Military matters, Tradition and pomp are an essential ingredient which again he abhors.  He was unable to check Bhagwat, so he sacked him. 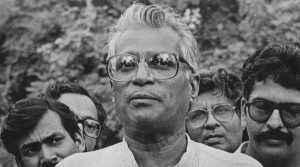 His political stances and directives have always raised hackles but in the end he has won and he may get away in the Bhagwat case too. He voted to banish Coca-Cola from India and it did come to pass. As Shastri Ramachandran in TOI stated he called businessmen and captains of industry rats and got away with it. As a trade unionist he mobilised hotel workers and taxi drivers in Mumbai and kept many employers on the run. He was called the giant-killer who humbled S.K. Patil as leader of the railway strike, which led to the emergency and he went to jail, handcuffed. He got elected to Parliament from jail by one of the biggest margins ever and has served seven terms in Parliament. He is a staunch socialist. He has always displayed a pathological aversion to the Congress even before the emergency. It is written of him, George could not be beaten into submission, despite the atrocities inflicted on him and his family. He is married to Late Humayun Kabir’s  (Secretary of education under Maulana Abdul Kalam Azad) daughter and has a son by her. (IDF MET THE LADY WITH LT CDR SATHPATHI WHO PLAYED BRIDGE WITH HER GROUP)

George occupied the South Block office which was vacated by the Lucknow trotting Hindi speaking Defence Minister Mulayam Singh Yadav. He came armed with the reputation of a ‘no nonsense English speaking’ fire brand ‘gung ho’ Union Leader, who had stormed into offices of corporations, stood for Tibet’s independence and cared little for Chairmen of companies and had shifted alliances from one political party to another. He is known to have deserted Morarji Desai for Charan Singh and so came with a reputation of being a shifty character in the political arena. This can be an asset in politics but in Defence when one says some thing it or gives an order there is no shifting sands about it or the Military edifice will crumble. When asked once to inaugurate and start a new train he quipped he knew better how to stop trains. His personal views on defence before assuming office included an anti nuclear policy stance and were termed a peacenik. One wonders whether he knew he would be made responsible to steer India’s Defence in to the nuclear haves camp after Pokhran II and one wonders how his conscience took it. Bhagwat swears Brajesh Misra of the PMO told the Chiefs a few days before the nuclear explosions of May 1998 not to disclose a word about the forthcoming tests to Fernandes and it has not been denied directly. If this were true then there is some thing amiss in how the Defence Minister and the Prime Minister’s office functioned on such delicate issues of National security and the lie in the matter needs to be pinned. The Navy earlier knew him as one who had discussed labour matters in dockyards in Mumbai and Cochin and the Navy has had an excellent record of uniformed and civilian workers executing their roles in Dockyards. In the Defence Ministry it was immediately evident he had limited background of weapons, military history, strategy and defence management and yet was keen to learn but his political role as the mediator for the BJP party kept him busier more with politics, than the Ministry. He did push bureaucrats to visit Siachen, Submarines and the Rajasthan desert in summer and promised to reform the Defence Ministry. He personally visited Siachen thrice and gained much popularity. Time only will tell how much he achieved during his period in office and in the post-Bhagwat period.

TODAY IDF SALUTES A DEFENCE MINISTER WHO WAS CONTROVERSIAL AND MAY HIS SOUL REST IN PEACE. IDF BELIEVES BIOGRAPHIES MATTER AND THIS IS A LEAF FOR BIO OF GEORGE FERNANDES AS SEEN BY IDF TO MIX WITH OTHERS.

Previous Post: CMC HEAD JINPING PLANS REDUCTION OF PLA BY HALF TO BEEF UP PLA(N) & PLA(AF) TO INCREASE CHINA’S POSTURE TO TAKE ON USA WITHOUT WAR—THIS SHOULD EXACERBATE INDIA’S CONCERNS & IDF RECOMMENDS NEEDS TO INCREASE INDIA’S DEFENCE SPENDING—-IDF WILL ANALYSE 1ST FEB BUDGET TO BE PRESENTED BY CA GOYAL AS IDF PREDICTED!
Next Post: IDF TABLES THE PAPER PRESENTED IN HAINAN ON INDIA CHINA COOPERATION POST PRESIDENT XI JINPING & PM MODI MAY SUMMIT AT WUHAN & QUINDAO ON 16TH MARCH 2019 AFTER READING AMBASSADOR LOU ZHAOHUI ‘s LONG EDIT IN INDIAN EXPRESS WITH PHOTOS OF CHINA’S SUVs BUSES AT 70% COST OF INDIA AND HIGH QUALITY LIKE THEIR MOBILES .