An IDF Report as Navy plans and moves ahead silently, knowing little is being planned by MOD.

Bimlipatam – Bheemunipatanam now, was a prominent Dutch port from 1780, protected by hills just like Dolphin hill protects Vishakapatnam port 26 km to the South, the Headquarters of the vital Eastern Naval Command headed by VAdm HCS Bisht. CNS Adm Sunil Lanba was the Chief of Staff there and has commanded Navy’s other two commands.

Bheemunipatanam has a large bay with a beach that naval personnel and tourists visit. Both the roadsteads were in the state of Madras till Andhra was formed. The Imperial Gazetteer of India states Bimli was a small fishing-trading village which was sacked in 1754 by renegade Maratha leader Jafar Ali. The Dutch landed and took over, and established a factory at Bhee and in 1826 and ceded it to the East India Company as per the agreement between the British, that the Dutch would to go East to Indonesia and Malaya. Ships called Bimli in numbers to trade in jute, cotton, textiles and spices. The 1903 records depict exports were Rs 32 lacs (Rs 1400 cr today) and 8 lacs in imports. 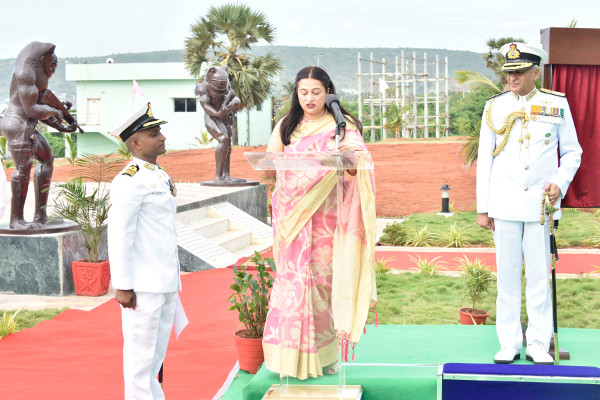 In late 19th century the Admiralty was directed to select a port on the East Coast to access Central Provinces and Cartright Reid chose the ready and narrow channel inlet in Vishakapatnam (see photo) as only tramper called. The Vishakapatnam port was built only after the First World War and the Royal Indian Navy moved in with small sloops. Later Indian Navy established INS Circars a large sailor’s training establishment and ENC was established just before the 1971 war, and though INS Vikrant operated from there it could not enter the inner harbor as the channel is too narrow. There are lessons in life cycle costing.

The commercial inner harbor was built by the Bengal Nagpur Railway for export of iron and manganese ore from Orissa and Nagpur and became a Major Port in 1963. Later CM and pilots Biju Patnaik bulldozed his way with PM Mrs Gandhi to give backward Orissa, Paradip port for its exports. Patnaik is an unsung hero for the Services too and he educated IDF and for his contributions and INS Chilka the Sailor’s Training establishment on the lake and HAL Koraput are his ideas. Centre always forgot Orissa but his son CM Naveen is his benefactor as he has his father’s qualities of honesty a rarity in Indian politics, and care for Oriyas !

Today naval ships of the Eastern Fleet, nuclear and conventional submarines like Arihant and Chakra up to 20,000 tons operate from the Naval base in congested conditions with a narrow channel as it is the largest bulk port of India handling 60% of India’s 10,000 tons cargo of iron ore, grain, coal, bauxite/alumina and phosphate rock. The port is bursting at its seams with merchant ships and more naval ships based there. Navy is building a new submarine base Varsha at Rambilli 120 km South. 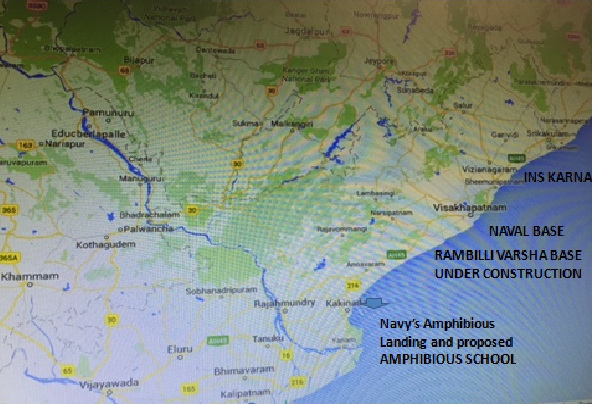 In 1970’s Adm Gorshkov warned that a ship could be sunk in the narrow channel of Vishakapatnam and throttle Navy in inner harbor and was a votary for Bimlipatman as a Naval Base and he offered to build a breakwater and build a big dockyard instead of Vishakapatnam, an idea of Adm Daya Shankar too.

On 12h July 2016, CNS Adm Sunil Lanba, PVSM, AVSM, ADC, commissioned a green-field Naval Marine Commando base (MARCOS) with units as ‘INS Karna’ at Bheemunipatanam. Vadm HCS Bisht spoke with dignitaries present.. ‘MARCOS’, was raised in February 1987 as the Indian Marine Special Force (IMSF), to operate in all three dimensions ( sea, air and land). Many trained in UK and USA as Seal Clearance Divers for rescue in peace, and sabotage, intelligence and attack, and on Italian Cosmos midgets at INS Abhimanyu on Karanjia island near Mumbai. New midgets are being inducted.

In Op Pawan (1987-90) Navy and MARCOS took part in the Army Commando operations ashore and at ports of KKS and Trincomalee. US SEAL Lt Arvind Singh headed IMSF with 10 Para Commandos, and executed daring tasks in Sri Lanka taking on LTTE. His team broke out from Jaffna Fort on 19 October 1987 and secured the area for the Army which resulted in the vital link up and saved 41 Brigade with 1 Maratha Light Infantry. On 21/22 October, IMSF team destroyed Guru Nagar Jetty and LTTE speedboats in the Jaffna Lagoon. Arvind and Leading CD1 C Singh were awarded Maha Vir Chakras. Lts Anup Verma and Prakash Chandravarkar were awarded Vir Chakras, emphasizing the role of the MARCOS. Hence the base on the East Coast in ‘Act East’ will play a big role. Gorshkov will be pleased up there.

Smt Reena Lanba, unveiled the Commissioning Plaque blessed ‘INS Karna’ after the shalokas, as its Naval Ensign went up to the National Anthem. CNS reviewed the commissioning parade and the ‘Commissioning Warrant’ was read out the by CO(Designate), Capt Varun Singh, SC. 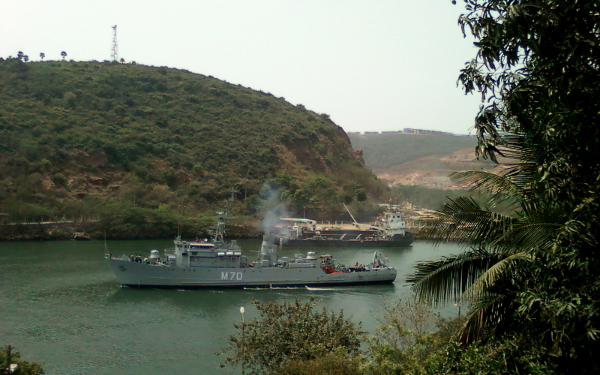 In 2000 as a Lt Varun was posted in Kashmir’s Wullar Lake, almost given up as dead when fighting terrorists (with the Army), holed up in a building. A shot fired on him burst his grenade. He was taken to the base hospital in Srinagar. Doctors discovered 75 splinters on his right side one near his heart , his arm in pieces. Doctors saved him and he still lives with splinters and overcame all odds to become a Capt, not many know and IDF Salutes him !.
CNS lauded the MARCOS for their amazing silent role to have proved their excellence wherever they have been deployed in as Special Force and conducted numerous independent missions of direct action, reconnaissance and surveillance, and recovery operations. Lanba emphasised the need to for all MARCOS to keep their “steel sharp and powder dry” as they would be the first into the battle and the need to be ‘Mission Ready and a Winner’ always, as the roles and responsibilities of the Indian Navy have expanded in the Indian Ocean Region and beyond, Special Operations Force who have done yeoman work in anti-piracy would be required to be deployed in future needs at the strategic and operational level.

“The largest share of credit for laying the foundation for Indo- Russian naval cooperation belongs to Admiral Georgyevich Gorshkov. He intervened adroitly at every impasse. His calibrated release of larger better and more modern ships, submarines and aircraft were not only in step with the larger objectives of the of Indo Russian political economical defence cooperation but also in step with his growing confidence that the Indian Navy would cope with what ever Russia gave”. Quote Indian Navy.

“Admiral Gorshkov was a great seaman and a greater maritime thinker of his times equal to Mahan for Russia. The 44,000 ton aircraft carrier renamed INS Vikramaditya is Navy’s most powerful ship with 12 MIG 29K multi role air dominance fighters which has changed the balance of power in the Indian Ocean”.

“Gorshkov helped with Soviet drawings and staff to build the Vishakapatnam Naval Dockyard and took personal interest during his visits in the hope Soviet Navy ships could be berthed there. He even predicted the harbour’s narrow entrance was not good for warships and suggested Bimlipatnam during his first visit and as his Flag Lt IDF listened. Navy told him we could not afford a new port. Mrs Indira Gandhi cleverly brushed aside the Soviet offer to base Soviet ships at Vishakapatnam and told the Soviet leadership USSR ships and fishing fleet in distress were welcome to call at Vishakapatnam where Soviet specialists were housed in large numbers in Kremlin hostel to assist the Indian Navy. Thanks to Gorshkov we got Chakra 1 in 1988, Chakra 2 in 2012 and soon 3 Indian built nuclear submarines”. 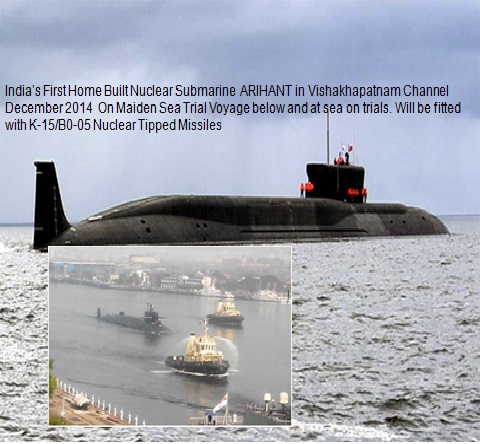 “Gorshkov singularly gave great importance to intelligence gathering at sea, and used the large Russian fishing fleet to fish world wide and many vessels had advanced electronic monitoring equipment, to monitor Western frequencies. Mahan has been silent on this but other wise, Mahan’s and Gorshkov’s views and analysis on the role of maritime power holds true”.

The commissioning of INS Karna, has added teeth to the Special Forces of the India. The name Karna comes from the MAHABHARAT. Karna was equal to two Maharatha warriors and was the son gift of Surya the Sun God in wedlock to Kunti who worshipped Surya. Kunti later married Pandu so Karna the warrior not accepted as a Pandav, by his brothers. Karna was a friend of Duryodhana hence fought on behalf of Kauravas in the Kurukshetra War. Now IDF MOD should get Army and Air Force to join Navy and set up an amphibious school at Kakinada (see photo). SHAN NO VARUNA.

Previous Post: CNO RICHARDSON IN CHINA TO COOL TENSIONS IN SCS – LESSONS FOR DIPLOMATS DEALING WITH PAKISTAN AND CHINA’S MILITARIES IN TERRITORIAL DISPUTES FOR PEACE AND TRANQUILITY————- AT LEAST !
Next Post: PAKISTAN IS TAKING ITS NUCLEAR DETERRENT TO SEA SEEKING PARITY WITH INDIA WITH INSECURITY & JEHADI TERROR& NUCLEAR BLACKMAIL—–CHINA ABETS PAKISTAN