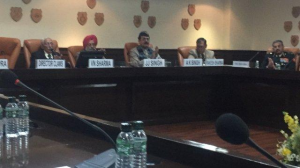 This is an IDF Commentary of a timely book on a ‘Military Strategy for India in the 21st Century’,  by Lt Gen AK Singh former Lt Governor of A&N who may have surveyed Naval underwater and over water intrusions into the IOR by PLA(N) and  Lt Gen Balraj Singh Nagal ex SFC Commander who worked with  NSA and Service Chiefs on nuclear issues and knows capabilities for No First Use.

The book has chapters by practioners of equipment and tactical military management more than strategy per se. Government in power takes  Strategic decisions and no MOD experienced bureaucrat or politician has a chapter in the informative book for all in uniform to read.The book is edited for CLAWs for Knowledge World to publish as a business venture. It was released at CLAWS on 19th Jan with media present by former Chiefs of the Army  Gen VN Sharma and Gen JJ Singh Ex Governor of Arunachal.

Gen Sharma was C-in-C Pakistan in Op Brasstacks conducted by COAS Gen K Sunderji and VCOAS Lt Gen SF Rodrigues in 1988 at Palam with US imported computers for replay and analysis. IDF was lucky to be Gen Sharma’s C-in-C Pakistan Navy and PN kept Indian Navy at Bay with a Bastion Strategy making a 200 km impregnable circle  from Karachi. Bastion strategy is not well studied in India, but Navy exercises to face it since. When Pakistan was losing the land war it called for a Cease Fire. Talk of nuclear threat was not allowed.

Lt Gen AK Singh and Lt Gen Pravin Bakshi jointly offer linkages of Military strategy and Operational art and Tactics and explain Jus Ad Bellum which conveys right to war. The chapter explains dissuasion, deterrence and to compel which is Chinese strategy of Sun Tzu to win without war. 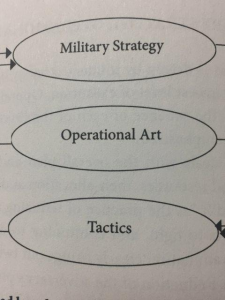 Lt Gen DS Hooda (surgical strike fame) writes on internal conflicts and insurgencies. The Army with AFSPA has left behind the Para Forces and taken over their task which began with Assam Rifles. The Army has the Rashtriya Rifles within resources but the rotation of units is a challenge as there is  need for local and terrain knowledge and intelligence— very essential to meet Jehadi tactics.

Vadm Anil Chopra explains India’s has advantageous geography as its destiny but poor Naval budgets cannot help India’s Maritime rise beyond its waters, and is a wake up calls  as he writes Pakistan will be a submarine force soon. He warns that band wagoning with USA with an unpredictable President Trump needs to be watched but supports engagement and suggests concentration of Navy’s power at Choke Points. He avoids any comment about Navy’s nuclear submarine strategy which is conspicuous throughout  the book, but well adds Navy is capital intensive and unless India can grow at 9 to 10% its economy will not be able to fund what it needs even if National Interests are defined.

ACM Arup Raja lists IAF’s assets and strength and explains Aerospace Strategy as a wide domain tool for a nation for its maximal use and an instrument for precision strike. He claims credit, that Kargil did not become war because Pakistan knew the power of the Indian Air Force to harm. IDF adds and hopes by Maximal use he means to have a AIR-SEA and AIR LAND doctrinal co-operation without which theatre commands and CDS will be difficult. 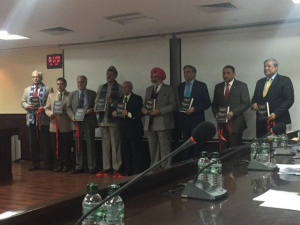 Lt Gen Prakash Katoch lists the world’s Special Forces and how they operate and makes a case for India for quick response (QRTs ?). NSG is under Home Ministry and IDF learns anti terror operations, especially in Kashmir are joint with Army Police BSF CRPFand NSG. The undefined command and control for success may be Jugad as BSF has doubled under BJP and the CRPF has risen from 61 to over 200 battalions and SSB is moving to Leh under a powerful Home Minister. Paras have imported  planes, drones and rifles and mortar power, and want to get out of IPS senior officers’ control.

Maj Gen PK Mallick a Signals officer provides a chapter on Cyber and Space and importance of Intelligence. He links and EW-SI- SIGINT EMS and the integration and synchronization of cyber electromagnetic activities (CEMA) a new concept, like Navy is attempting fusion of data in its MDA Fusion Centre that RM Sitharaman recently inaugurated in Gurgaon. Mallick quotes  US Army Publications for Unified Land Operations. IDF has emphasized India is vulnerable to cyber attacks  and needs big servers and a firewall to protect data and to control systems  which Mukesh Ambani has understood, and offered to put ups web portals  like Google has done for USA, and Weibao in China. 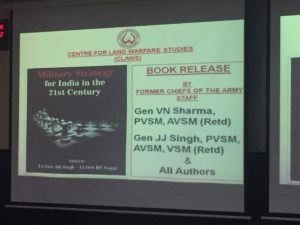 Bharat Karnad of CPR on nuclear issues is his usual critical self in his chapter and in his explanation at CLAWs and writes about the Doomsday Clock, a Pearl Harbour could have happened to the Navy instead of a 26/11, and how he doubts many decisions and doubts Fission bomb acquisition in the 1998 Shakti nuclear blasts.

Manoj Joshi of ORF discusses all the wars India has fought in critique and states India’s Defence management is frozen in time and confirms IDF’s views that change can only come from those in authority. It has not come from four BJP Defence Ministers in last five years or IAS Defence Secretaries glued to files. A Lt Gen at CLAWs stated a former Defence Secretary in a conference said he had never seen a war or contingency plan. With PM Modi this should have changed.

An interesting chapter on Civil Military relations by Lt Gen Rakesh Sharma ex AG is boldly lists failures in strategy and IDF adds there is widespread feeling Chiefs after sacking of officers and CNS Adm Vishnu Bhagwat by BJP under Article 311 of the Constitution with no recourse to courts and its threat thereof, have lost some authority to offer their voice unlike FM Manekshaw did and got away with success in 1971 but was clipped for CDS. Gen Rakesh lists many failures due to no responsibilities or accountabilities and calls Op Pawan and Parakram goalless draws. Non use of Air Force in 1962 is discussed and that there is absence of civil military dialogue and civilians have power without knowledge.

The final quote by the authors is the age old dictum, “ War Is Continuation Of Politics By Other Means’, and the need to articulate grand a strategy for India and seek new ways to assist services in planning. IDF adds, a White Paper on Defence is the call for  the powerful BJP Government before elections. The book comes at a time China’s Eternal Leader  Xi Jinping, has asked his PLA s Liberation Army to be ready for battle, as the country in his opinion faces unprecedented risks and challenges. In Chinese the word battle means competition and not war !

That attitude is how China tops in Olympics with a KIASU spirit ingrained after 100 years of humiliation by Foreign Powers (never to lose as it implies losing face). Jinping has warned, “we must strengthen our sense to face unexpected hardship, crisis and battle.” In China mothers tell their son “Go and Win”. In India mothers say. “Do not lose!”.

The effort is an expensive Rs 1200 priced book beyond easy reach for younger researchers who work on the net. Hence  IDF feels it should be considered that such service books should be prepared for printing and limited copies (few hundred) printed for large Units, Officials, Service Libraries  and senior Flag Officers and the book be placed on the net for wide publicity with abstracts of each of the twelve chapters. This will give wide professional circulation.

Indian Navy has done that for books including to Harper Collins as money making should not be the aim to help debate, and the nation. The 230 paged soft cover black and white book with 300 copies should not cost more than Rs 2.5 for good printing and binding including pagination and profit to printer and remuneration  to each of the  contributors with free copies. This needs debate and service and may be think tanks can afford it !

Previous Post: COAS GEN RAWAT IS RESTRUCTURING HIS ARMY FOR QUICK RESPONSE DICTATED BY ECONOMIC COMPULSIONS BUT WHAT IS NEEDED IS REFORM OF THE ARMED FORCES WITH MOD —- A RESTRUCTURED ARMY WITHOUT IN BUILT AIR & NAVAL SUPPORT REPEATS PATCH WORK ! REFORM IS NEEDED !
Next Post: CMC HEAD JINPING PLANS REDUCTION OF PLA BY HALF TO BEEF UP PLA(N) & PLA(AF) TO INCREASE CHINA’S POSTURE TO TAKE ON USA WITHOUT WAR—THIS SHOULD EXACERBATE INDIA’S CONCERNS & IDF RECOMMENDS NEEDS TO INCREASE INDIA’S DEFENCE SPENDING—-IDF WILL ANALYSE 1ST FEB BUDGET TO BE PRESENTED BY CA GOYAL AS IDF PREDICTED!