This is an IDF Analysis with inputs from an Analyst who wrote about the supposed scam in 2011 when CAG smelt a rat and found Fincantieri was favoured to supply two badly needed Tankers INS DEEPAK (A50) and SHAKTI with cheaper than specified WARSHIP steel for the Indian Navy with changed RFP for the grade of the steel. Like in Agusta Helicopters for Italy. MOD must have proposed and Navy must have consented as tankers are critical warships, but also called auxiliary ships with Pennant numbers beginning with A. Both ships have done yeoman service.

Accordingly, a RFP was issued to 12 firms in November 2005. In response to the RFP, only three firms responded–Russia’s Rosoboronexport State Corp, South Korea’s Hyundai Heavy Industries Ltd (HHIL), and Fincantieri. Out of them, only Rosoboronexport offered a technical proposal for using DMR-249A or equivalent steel. HHIL’s proposal was rejected due to non-compliance with the RFP’s provisions, which included non-usage of DMR-249A steel. Fincantieri’s proposal was stated to be compliant with the RFP conditions. However, the firm proposed usage of DH-36 steel instead of DMR-249A.

Hyundai Heavy Industries Ltd (HHIL), rightly suggested a lower quality steel and Russia never agreed to off sets but was keen to get the contract. IDC could not get this item across on the Times Now programme at 10pm on 13th and do so now for professionals. 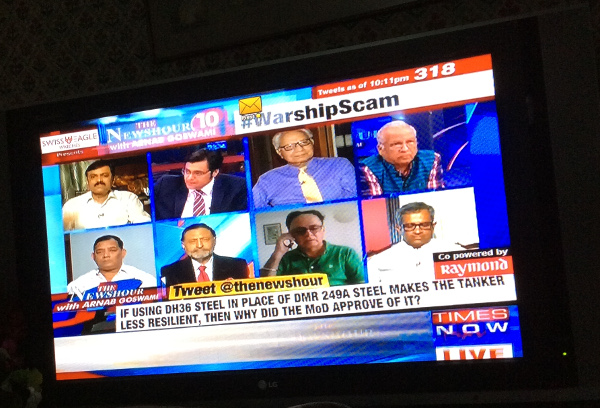 The justification offered by Fincantieri for selection of DH-36 to the MoD’s Technical Evaluation Committee (TEC) included problems in sourcing DMR-249A steel, the normal use of ordinary steel for tankers and an explanation on why the high-resilience performance of DMR-249A was not necessary for the tankers. This was despite Fincantieri’s own admission that DH-36 has less weight and less resilience when compared to DMR-249A, and the chemical compositions of DH-36 grade steel and DMR-249A steel being different and therefore they cannot be treated as equivalent to each other. The prices of these two grades of steel are also different, since DMR-249A is more expensive than DH-36 grade steel.

The catch is UPA’s MOD did not reduce the price so may be some one was the rat who benefitted. It was the season of scams those UPA HEY DAYS with PM WATCHING and in these elections times in Kerala and Tamil Nadu it is a desperate BJP Vs a more desperate Congress with daggers drawn. Congress has raised Gujrat State’s oil gas company’s large scam and Kejriwal’s and AAP leaders have questioned PM Modi’s educational certificates for BA and MA which have some minor discrepancies. PM can well give an Affidavit for calling him a lair and sue AAP. The truth will come out and must. 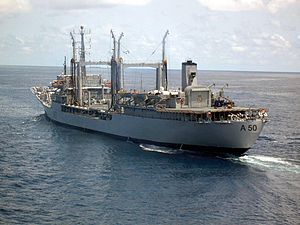 Adm Shekhar Sinha one of the world’s finest Sea Harrier pilots from Bihar, who was FOC-IN-C West knows about all tanker’s double hull build policy by IMO has stated one tanker had a crack ( how big or was it an open weld ?) on maiden passage from Italy. This set ARNAB Goswami loose on safety of ships in Times Now for BJP and on to the Navy, he finally praised in the end in his programme. IDF and Adm Madanjit Singh another stellar FOC-in-C a gunner, tried to explain tankers are auxiliary ships normally away from the war scene and also remain well protected.

The story. Indian Navy’s (IN) needed two new fleet replenishment tankers. Deepak–built by Fincantieri of Italy, arrived Mumbai on December 24, 2010 and the tanker was subjected to final outfitting for 10-days by technicians from Fincantieri at Mumbai Port Trust, and handed over. Since then fitted with a small bow gun and Pearl-S Israel Indian EW they have been flogged with no complaints, as Navy under CNS Adm RK Dhowan and his team of brass have kept up a high tempo of operations and tankers support the tempo.

The tankers, were built in a record period of two years as per the terms of the €139 million contract signed between the Ministry of Defence (MoD) and Fincantieri of October 2008. Built at Fincantieri’s Yard 6186 at Muggiano, the double-hulled tanker was launched on February 12, 2010 and Deepak began its sea trials in April 2010. The second tanker—INS Shakti—was ordered in March 2009 and launched on October 11, 2010.

As part of the direct DPP industrial offsets package for the first fleet tanker, Fincantieri had in 2008 placed an order worth €14.3 million with Bharat Electronics Ltd for the supply of a composite communications system, versatile communications suite, ESM system, and an optronic fire-control system. But Fincantieri needed to fulfil 30% around $ 60 mill per ship and it was reported paid the fine for non compliance clause quite happily. Off sets have failed.

Each of the two very good tankers with excellent ergonomic accommodation that being aped in the Navy, is 175 metres long, 25 metres wide and 19 feet high, and has a displacement at full load of 27,500 tonnes. Each of them is powered by two 10,000kW diesel engines that drive the twin adjustable-pitch propellers. The tanker can reach a maximum speed of 20 Knots, can refuel four warships at the same time, has a hangar to accommodate a 10-tonne helicopter, and can provide accommodation for 250 personnel, including its crew complement. It has special designs by the Navy’s DND. 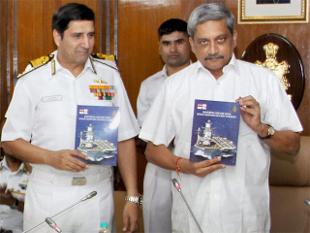 However, the acquisition of these two tankers has re-ignited the controversy of August 2010, when the Comptroller and Auditor General (CAG) of India smelt a rat it seems and criticized the acceptance of inferior-grade steel used in the manufacture of the two fleet tankers, saying that it amounted to “UNDUE FAVOUR TO A FOREIGN VENDOR (FINCANTIERI) IN THE PROCUREMENT OF FLEET TANKERS”. The CAG also saw a problem with the excess provisioning of spares worth more than Rs300 million (US$6 million) and under-realisation of industrial offsets benefits to Indian industry’ under the Rs9.36 billion in the $200 million contract.

The CAG’s report revealed that the original Request for Proposal (RFP) had a mandatory stipulation requiring the use of ‘DMR-249A which Navy DRDO and SAIL perfected or equivalent grade steel’ which higher in cost than DMR 249A steel. The report added that in order to maintain its approved force levels, the IN’s Shipbuilding Plan had envisaged the addition of two fleet tankers by 2008 and 2011, respectively.

“NONETHELESS,” said the CAG, “THE TEC OPINED THAT DH-36 WAS EQUIVALENT TO DMR-249A AND ACCEPTED FINCANTIERI’S TECHNICAL BID WITHOUT TAKING DUE COGNIZANCE OF THE COMPETING OFFERS MADE BY ROSOBORONEXPORT AND HHIL. THE TECHNICAL OVERSIGHT COMMITTEE TOO RULED IN FAVOUR OF FINCANTIERI AFTER THE COMMERCIAL BIDS WERE OPENED, SINCE FINCANTIERI EMERGED AS THE LOWEST BIDDER WITH A QUOTE OF RS7.23 BILLION. THE OFFER OF ROSOBORONEXPORT WAS REJECTED AS IT WAS COSTLIER, BEING BASED UPON THE PRICES OF DMR-249A OR EQUIVALENT STEEL”.

Fincantieri’s industrial partnership with India began in 2004 when it drew up two contracts with Cochin Shipyard Ltd for the design of fitment of a GE-built LM-2500 gas turbine-based propulsion system it has built for Italy, plus related technology transfer and provision of complementary services required for the construction of the IN’s first Indigenous Aircraft Carrier (IAC), INS Vikrant. Furthermore, in 2007 the company delivered the ‘Sagar Nidhi’, an oceanographic survey vessel for the Chennai-based National Institute of Ocean Technology (NIOT).

BJP must find the BIG money trail and then act, not skeletons on here say, as so far there is no break through in the Agusta AW-101 CASE for the big money ! India’s Armed Forces are upright with the odd Black sheep but their reputation is being tarnished and it’s not a healthy sign. Whistle blowing without facts can be dangerous. No one seems to be Miltary’s CDS to stand up. Where are our Mankeshaw’s of the Army with 1.3 mill Brave Hearts who only have a say even when Jats revolt ! Navy can only look after the seas and the Air Force the skies and its Army that wins in peace or war. Shan No Varuna.