India Foundation (IF) is a right-leaning think tank in New Delhi aligned with the BJP-RSS Government, and was founded by NSA Ajit Doval’s US educated banker son, Shaurya Doval. From small beginnings it is now an influential think tank. Its members include Union Ministers Suresh Prabhu, Nirmala Sitharaman, Jayant Sinha, MJ Akbar, and RSS Ram Madhav BJP’s dynamic General Secretary Shakti Sinha IAS, Vadm Shekhar Sinha as its members, and selected others. IF arranges conferences and publishes a Journal.

India Foundation arranged a well timed two day seminal Indian Ocean Conference (IOC-16) from 1st September in Singapore at the Shangri-La Hotel in the backdrop of Chinese assertions in South China Sea (SCS) and PLA(N) ships and submarine forays into Indian Ocean and construction of port projects like Gwadar and Ormara of $ 46 bill CPEC through POK, and support to Pakistan, a hub nation, promoting constant terror in India and elsewhere. 40 diverse speakers and 72 invited participants from all nations featured in the 35 page directory with colour photographs and bios which helped the audience identify them and their leanings.

IOC-16 was held a day before PM Modi embarked on a visit to Vietnam, where he signed a Co-operative Strategic and other Agreements. PM tabled a $ 300 mill line of credit for defence purchases as FPB boats are on order already and RM Parrikar had stated Viet Navy’s Russian Petyas could be refitted and with BrahMOS missiles. PM Modi who has appetite for strategic risks, then proceeded to Hangzou for G-20/BRIC meet and Vientiane for the East Asia/ASEAN summit, where he dished out threats to Pakistan ‘to stop acts of terrorism’, and for the world to sanction that nation, ahead of visit of President Ghani to India.

PM Modi met with President XI Jinping In Hangzou and expressed concern on the CEPC $ 46 bill investment in India’s POK region and Baluchistan where he abhors the atrocities Pakistan is committing on Baluchis struggling for Independence, who have thanked him. PM Modi met President Obama for the 8th time in two years and speeches written they say by FS S Jaishankar and Mr Javed Ishraf in PMO are crisp with ideas, and PM Modi delivers them with excellent modulation he has imbibed as a RSS Prachark (propagandist). 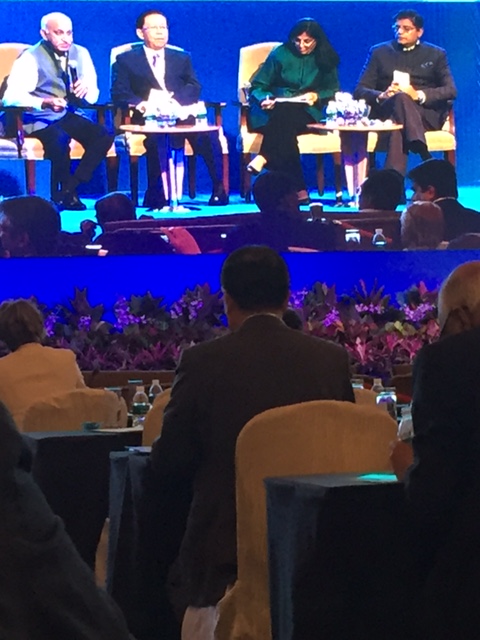 The aim of the conference as IDF assessed, was to proudly flag Indian nationalism as an essential need for growth, and seek co-operation for India from littoral states as their facilitator nation, a word used often. India has a strong Navy and DGNO RAdm Sanjay Singh spoke representing CNS Adm Sunil Lanba and INS Satpura under command of Capt Promod was in Singapore at Changi after Malabar and RIMPAC four months outing; and Radm Donald Gabrielson USN spoke to promote stability for trade and shipping in the Asia Pacific which region is becoming the centre of gravity of the world, as the world’s 70% trade passes through these seas. India’s effort to play a more pro-active role in Indo-Pacific and protect freedom of navigation (FON) with USN was conveyed.

Another well articulated aim by speakers was to convey a message that nations should obey International Laws of the Seas (UNCLOS -1982). Evidently China was not mentioned by name, but the message was directed towards China’s historic claims in the South China Sea and over six islands challenged by Philippines. Both claims have been rejected by the Permanent Court of Arbitration (as rocks in PCA ruling) at the Hague on 12th August. China refuses to co-operate or enact the ruling, which has created tensions in the region and ASEAN. Singapore which has no claims offers to be an interlocutor and PM Lee is to visit India next month, and President Mukherjee to Singapore. Both experienced leaders with no encumbrances’ and brilliant staffs, feel confident to keep traveling and meeting leaders personally, more often than past Indian leaders did. 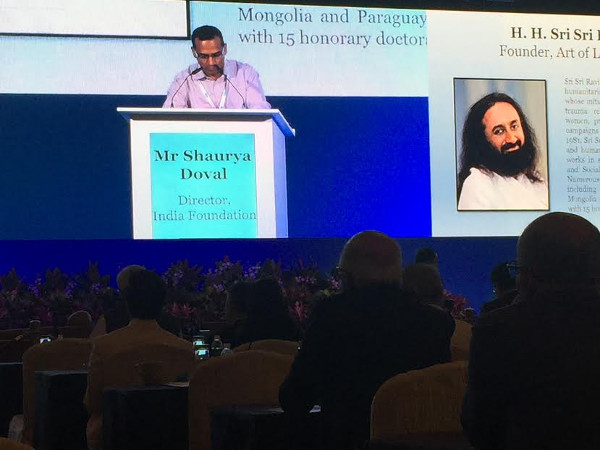 On Ist Sep, there were four workshops. One on COMITY which means co-operation for common aims and security was led by Amb G Parthsarathy. COMMERCE (trade) workshop was led by Amb Ashok Kantha and COMMERCE (investments) by Amb 0ng Keng Meng of RSIS Singapore. CULTURE was led by Dr Patrick French and a dinner for VIPs with speeches followed in the banquet hall, after net working. Day two was full of speeches.

Fullerton’s Sekhon shrilly said India must improve infrastructure, rule of swift law dispensation and arbitration enactment and reduce bureaucratic controls and taxation hassles to attract investments, currently deficient in India’s policies like in ‘Make in India’. The world is replete with money to invest he added, and fund managers have to assure clients. IDF states the key Strategic Partner issue for defence investments, has still not been addressed.

Mr. Bertil Lintner a Thai Journalist’s theme was, India has realised the importance of the Eastern economies of ASEAN so PM Narendra Modi has rightly given India’s East Coast importance and enacted an ‘Act East policy’. Lintner turned to China and the importance of the Malacca Straits and Indian Ocean trade routes and that China had begun taking greater interest in the Indian Ocean for trade and geo-economic strategy interests, with vigour in the new possibilities of trade routes to and from Africa. China seeks Indian Ocean power status, hinting at Gwadar and the CPEC as did Australia’s Cmde Lee Cordner (ex IDSA), who fielded Q’s on China in the Q&A session. A last minute Peace and Deployment Institute China rep, when questioned by Amb Sikri on South China Sea politely said he would take up questions back to China.

Insertion of a session on comity was appropriate, as comity of nations means courtesy between nations, as in respect shown by one country for the laws, judicial decisions, and institutions of another and as at present the South China Sea and Indian Ocean is seeing power politics of competition with US, Japan and Australia chipping in to deflect China’s aggressiveness.

Foreign Secretary S Jaishankar in a key note talk on day two who was Ex HC in Singapore before China and USA articulated India’s policy towards the Indian Ocean and emphasised it has begun to take a clear, coherent form and he mentioned the LEMOA with the US, the important bilateral visit to Vietnam by Prime Minister Modi, and an ambitious future being laid out for nations in the region.

FS Jaishankar said India was committed to be supportive in the expansion and further invigoration of activities, from renewable energy and the blue economy (Islands offered for development and investments) to maritime safety and security while presenting India’s view effectively for a China-centric deflection by offering a stake to littoral states. FS Jaishankar spoke of PM Modi’s framework outlined last year during his March 2015 visit to the Seychelles and Mauritius and talked about reviving the Indian Ocean as a geo-political concept.

The message that Oceans have always fascinated man and Indians from early days of civilization and that India had vibrant trade with the region by the seas till it was taken over by rulers who came down from the North, and then Europeans who came by the seas was made loud and clear. Shashi Tharoor spoke and he made the conference feel like it was a ‘coming of age’ party of India’s Maritime and Economic Ambitions re-seek and assert its place in the Comity of nations.

IDF congratulates the organizers, donors, and Shaurya Doval and Shri Ram Madhav and Shri Shakti Sinha and volunteers for taking on what became a well organized IOR conference that set and achieved its goals. If India’s economy trots at over 7.6% and there are no upheavals in the South Asian nations, and more stability within, India’s strategy to lead Maritime Asia in this century can be a boon, as its young population is on the move to move India. BJP government is taking strategic risks with pronouncements, and if India’s Armed Forces are party to the strategies for action, India can see ‘Acche Din’, on the world stage. Shan No Varuna.

Previous Post: 22,000 PAGES SCORPENE LEAK ROAMING SINCE 2011 NOW OPEN ON PUBLIC INTERNET SHOULD NOT HARM INDIAN NAVAL OPERATIONS MUCH AND CAN BE TWEAKED
Next Post: ST TROPEZ PAYS HOMAGE TO MAHARAJA RANJIT SINGH AND HIS FRENCH C-IN-C GEN ALLARD WITH A SEMINAL INDO-FRENCH NAVAL CO-OPERATION MEET