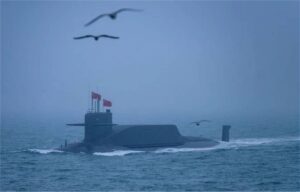 This is an IDF analysis with inputs from Prasun Sengupta of the fast expanding PLA(Navy) which celebrated its 72nd Navy Day on 23rd April 2021 by commissioning two large ships and an improved SSBN submarine, at the strategic Sanya naval base in Yalong Bay which berths aircraft carriers on the island of Hainan nearest to India. Hainan is a a holiday resort with world class water tourism facilities. Rich Chinese own luxurious winter homes.

PLA(N)’s 25 square km Yulin base is next to Sanya with caverns for berthing nuclear submarines and nuclear support like media reports, Indian Navy will have at Ramboli(Varsha) South of Vishakhapatnam. At the Commissioning ceremony the 1500 PLA(N) personnel did not follow social distancing or don masks and President Xi Jinping mingled with them which intrigued IDF and hence IDF adds analysis on why India is possibly going through a massive Covid attack, lacking vaccine herd immunity.

Covid pandemic in India seems a self goal, because of negligence and possibly poor Intelligence inputs to warn the leadership from abroad and from states. India’s overall infrastructure has been neglected by successive governments, but India’s unique Jugad way of working keeps things going. Covid is testing India’s poor medical infrastructure like never before. India lacks dedicated professional Intelligence like most nation’s and the transferable bureaucratic Indian Police Service(IPS) personnel have resisted reform as IPS fears promotion prospects and billets will dwindle. Covid should spark a debate, as Subhir Bhaumik writes an odd Kao or a Doval may not be enough. We need more Bonds not Raminder Singhs. 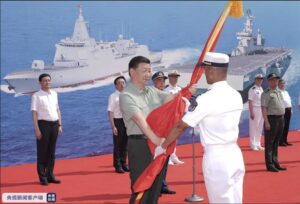 1.PLA(N)’s third 12,300 ton Type 055 DDG Dalian 105. is 186m long and 21m wide with a draught of 8 metres, and complement of 380, sporting an integrated mast housing L/S-band active phased-array radars like India’s M/F Star from Israel, plus a 112-cell universal system(VLS) like Barak-8 and HQ-9B long-range surface-to-air missiles, and YJ-12A supersonic anti-ship cruise missiles like the BrahMos and and CJ-1000 long range land attack cruise missiles like Tomahawk as per Chinese claims. Close-in air-defence, is by a FL-3000N laser-guided missile suite for a 130mm H/PJ-38 main gun, and twin H/PJ-11 ten-barrel 30mm point-defence system.

2.PLA(N)’s first 30,000 ton Type 075 LHD Haïnan-31 was built at Hudong-Zhonghua. It is 250 metre longs, 32-metre beam with a draught of 8.5 metres, speed of 23 Knots, and houses up to eighteen 12-tonne Z-18F ASW/utility like IN’s ordered Sikorsky Seahawks and Z-18K AEW helicopters. Design work copying foreign LPDs began early and this first vessel was launched in 2019 but caught fire and was repaired. China’s smaller LPH 71 is for export and one is for Thailand. 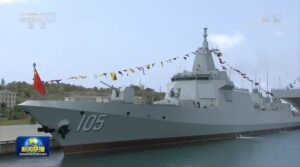 XI JInping extended greetings and exhorted PLA(N) to be ever ready, congratulating the Captains and Political Commissars. Three platforms weighing over 50,000 total tons worth $ 8 billion commissioned in one day speaks of the building and organizational ability of Chinese shipyards and economic confidence to spend on its Navy which China hopes will pay dividends, if the lessons of the Royal Navy in the 19th Century and US Navy in the 20th Century are repeated. IDF recalls Soviet Navy also grew to challenge the USA but its military spending crippled USSR’s economy. China hopes to win without war and Zhuge Liang’s tactics.

A security architecture with a maritime QUAD of nations is forming in the East with the fulcrum in the IOR with Indian Navy as USA’s weapon with allies against China’s abrasiveness in the South China Sea and it is too early to comment. Pakistan holds some keys for China’s success.

Commenting on IDF’s post that Covid leaked from the Wuhan laboratory, China claims by the end of March 2020, there were only a few active Covid cases in China. Now (April 2021)over 200000000 doses of SINOVAC vaccines have been administered and millions gifted and exported to outdo India. Pakistan has 7 million gratis Chinese vaccines and is buying more  millions. China claims it is Covid Free for over a year.

IDF leaves Intelligence agencies to get the facts as China has set up a Vaccine center in Addis Aba airport to help corner goodwill. India exported free vaccines before attempting herd vaccine immunity for its own population and is rushing to do it now.

IDF leaned on President Trump’s statement and leaders who had called Covid a “Wuhan Virus”, and surely professional Intelligence agencies and Embassies world over must have tendered secret reports from China. Wuhan was locked down when the pandemic broke last year most Mission staff and foreigners have been vaccinated in China.China claims vaccination has succeeded and offered India help. After Ladakh India will not reply. 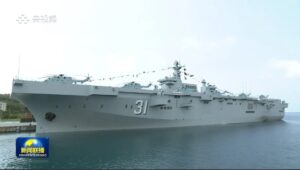 Government has announced citizens over 18 can have Covid-19 vaccination from 1st May. The government’s drive is to Import foreign vaccines like Sputnik V. It is mind boggling how millions over 18 can register but Jugad is a science called improvisation and India could cope.

SIPRI has reported China is the second highest defence spender after the USA, four times India in third position($70 Bill). However China’s budgets remain far above what is disclosed and the world has limited knowledge of the capabilities of China’s military. China never explains the purpose or desired end-states of the PLA’s strategy but issues White Papers saying it wants to protect China’s trade in IOR, and worldwide. Britain and the USA did just that which led to wars, but in the Nuclear era war looks farfetched.

PLA(Navy) has undergone a transformation since the mid-1990s with most of the attention devoted to the PLA’s organization to face threats to gain Taiwan after Hong Kong and has ambition to win the New Great Maritime Game with growing naval capabilities, and is taking Pakistan on board with a CPEC and many BRI projects in the region.

IDF has been following China’s Navy with visits for conferences and travel to Hong Kong since the 1970s, when it was less developed than India. By 2019 the amazing infrastructure development and digitalization of the economy, fast electric scooters, no motor bykes, amazing buses and SUVs at rock bottom prices and 5G internet mobility with a Firewall was mind boggling. On an official visIt to a military exhibition in the 1990s to Beijing as Defence Adviser in Singapore the Military show was small and knowledge of modern weapons was poor as language was a barrier that India never suffered especially the Navy.

In the 1980s and 1990s, the PLA(N) was not only saddled with outdated ships and equipment but also hamstrung by problems with personnel quality, poor training, and the distractions and massive corruption associated with involvement in an array of commercial activities. In the last two decades with high priority attached to modernizing personally by Jinping the PLA(N), has seen a technological uptick.

In the 2019 CIA’s report on the rise of Military Power of the PRC, USA accepted China’s rapid rise as a regional political and economic power with global aspirations. it has significant implications for India and the region. Report added,  USA welcomes the rise of a peaceful and prosperous China, and it encourages China to participate as a responsible international stakeholder by taking on a greater share of responsibility for the health and success of the global system. But self interests matter and Xi Jinping’s and China interests to run a different world order than the Westphalian order have been articulated. World may have a bi-polar world after Covid.Shan No Varuna.