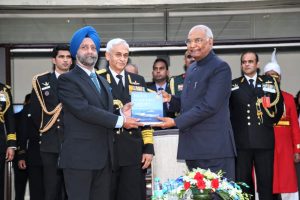 The voluminous 430 paged chronicle is printed with high resolution pictures in a coffee table form and is freely available on the net on https://www.indiannavy.nic.in/links for Maritime Beavers to appreciate how Indian  Navy became a Force to reckon with and is rated number  5 in the world. The book explains the ingredients of its rise.

India Defence Forum (IDF) has a confession to make. The book is long but as it has many professional features that Naval officers of yore started and the Admirals of the decade 2001-10 have taken forward, it was a pleasure to rush through the chapters. It surprises many to learn how Indian Navy carries out 24 major exercises annually, maintains advanced ships in crowded infrastructure, fires powerful Klub and BrahMos missiles and shows the Flag around the world with succor in HADR and control piracy and how Naval Wives in NWWA help.

Navy recently assured the Nation it is part of India’s Triad and how all this came about is in the book as the organizational aspects are in the book in detail in well arranged chapters. The decade 2001-10 in the book does justice to Navy’s achievements and former Navy officers and men  are assured the Navy is on course despite low budgets, discussed later.

Admiral Sunil Lanba, Chief of the Naval Staff, released ‘Blue Waters Ahoy’ authored by author Vadm Anup Singh who sailed against IDF as young budding Lt and retired as the Flag Officer Commanding-in-Chief of Eastern Naval Command. He presented the book to the President Shri. Ramnath Kovind, also India’s Supreme Commander at Navy House on Navy Day which falls every year on 04 December to commemorate Navy’s heroic offensive actions during the 1971 war which hastened formation of Bangla Desh. IDF reiterates 4th Dec  should be Armed Forces Day as India does not have one, and IAF also took part in the raid on Kemari tanks on 4th Dec 1971 and Army went into action into East Pakistan and the Mukhti Bahini navigated their historic military advance to Dacca to free the East Bengalis and make Pakistani Armed Forces to surrender. Dignitaries and foreign Attaches were present at the function. This unique undertaking by the Indian Navy can be traced back to 1968, when the Service established a History Cell. 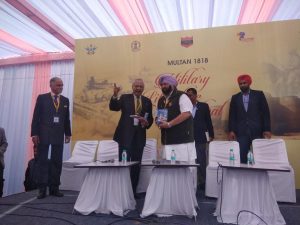 Very rightly CNS Adm Sunil Lanba a Navigator like Adm Anup Singh records. “To seafarers, chronicling history is of social significance since the sea leaves no tell tale marks for those who follow. There are no forts or ruins to tell a story”. Hence to call a spade a spade IDF uses its sartorial privilege to coin Bravo Bravo Zulu….as BZ just means WELL DONE for Navy’s effort and sparing the cost to do it in style for posterity for history and history repeats in some other form.

The 430 pages covers the history of Maritime India and the coming of age when Navy became a Builder’s Navy and moves to its Operations which were many which includes Military Diplomacy and IDF would call led by Maritime Diplomacy. PM Narendra Modi has used this advantage with India’s geography to try to turn India from a Continental mindset to a Maritime Military mindset to lead India’s foreign policy  but the message has still to seep in to India as China makes inroads and Pakistan sinks into debt, but continues its opposition to India partly because it too has land and maritime geography.

Today, ask any manager and he will tell you Human Relations (HR) is the biggest challenge in the company so the book has a full chapter on Human Resource Development and Navy carries out training and education at all levels and sea going reports have weight. But surprisingly the Navy still has only two Fleets and cancels contracts of ships so will have less Sea Commands. Studying Coast Guard with less manpower but 130 sea and many air commands sees them do well and their expansion plan is a delight for a bureaucrat to sanction. Young officers get three to four commands ! Of course they have no weapons to select as MOD stalls much to complete design of a warship for the Navy. This delays shipbuilding.

With human aspects of sea going professionals the book flows to Force Multipliers and adds Supporters and IDF wishES Tri Service issues could be added for the true military force of India as the Nation awaits Theatre Commands and a CDS which remains promises with a Maritime Security Authority in BJP manifesto and hope enters the next as 13 maritime agencies do their own. Even maritime law is with Ministry of Ocean Development so Italian Marines case and Armed Forces Ohio were botched.

History repeats itself the author reminds us that but also shows in a full chapter the transformational changes and these lead to operational changes without disturbing the traditions and policies that have held the test of time. WESEE which gives technology and design directorate which both have made Make in India possible for all ships to be made in India is well explained with a chapter on HQIDS which Navy funds. HQIDS awaits CDS. 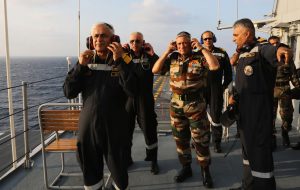 2001 2010 saw new inductions like the Krivacks to give grist to Navy’s designers and operators with nuclear submarines and aircraft which have fructified with P8is and is commented later in this post. Ceremonial and welfare is not neglected. Finally the Appendices is a work of perseverance with putting down all commissions and dates and even accidents which were acted upon. A CNS resigned later but were corrected with Standard Operating Procedures –SOPS being reinforced and responsibility being pinned by the next CNS who ordered SOPs and which current Chiefs follow and may be scripted in the next History book- 2010-2020 ! The bar is set ! And hope the other services follow to script Chronicles as India is destined to rise to the top rung and economic power and military power will count and history is important.

This book is gold and the experience of CNS Adm Sunil Lanba who commanded two commands and NDC and Anup Singh shows it as they were hands on in the period and feel is very important for a historian. IDF also tried and has tried again in Novel AN UNDERHAND AFFAIR due out in January.

Finally the acknowledgements in the book do not miss anyone who helped the author as over 70 names of officers from Navy and even Air Force and sailors and civilians who helped are named. The History Section of the Navy gets the Author’s accolades and that is called ‘Teamwork of Ship Mates’ and a ship sails or sinks together and a secular attitude helps.  The experiences of 2001 -2010 helped Navy to give great credence to Maritime Domain Awareness (MDA). 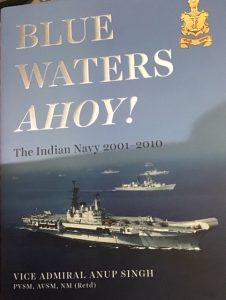 The Indian Navy has acquired 8 plus 4 to come P8Is fighting machines which are brimming and fitted with sensors and has two Safran CFM 56-7 engines. For EW the planes have a Electronica planar phased array antennae with Netuno ECM 4000 and EW sensors, a Raytheon AN/APY-10 radar and active multi-static and passive acoustic sensor system, and Telephonics APY-143 inverse synthetic aperture radar which can detect air targets for direction.

The plane is manned by nine-person crew which includes women Observer officers, a dual-pilot cockpit and has workstations with universal multi-function displays, a small ready accommodation for additional workstation and workload sharing. The crew operate the optical and infrared sensors. The crew control the internal five-station weapons bay, four wing pylons, two centerline pylons, all supported by digital stores management. The plane has an airspeed of 490 kmph. So Navy has converted its IMAC in Gurgaon into a Fusion Centre for MDA which will come in next book.A Ahoy.

On economy in 2017 Finance Minister Arun Jaitley stated in 2017 “India is a bright spot in the world’s gloomy economy”, but those hopes were belied in the Defence Budget of 2018-19. The Finance Ministry allocated only Rs 295,511 crores ($42.7Bill) for Defence which is 1.4% of India’s GDP. The Navy only got 18%, IAF 25% AND Army 42% which will need correction. Understanding Blue Waters and Blue Economy may help. Shan Na Varuna.

Previous Post: INDIAN ARMED FORCES FINEST HOUR VIJAY DIVAS 16th DEC 1971 APPEARS RECEEDED DUE TO POLITICS OR DOES GLORY OF WAR NOT INTEREST INDIANS & ALSO LESSONS OF JOINTNESS NEED TO BE LEARNT –THAT IS THE BIBILCAL QUESTION NEEDS ANSWERING
Next Post: COAS GEN RAWAT IS RESTRUCTURING HIS ARMY FOR QUICK RESPONSE DICTATED BY ECONOMIC COMPULSIONS BUT WHAT IS NEEDED IS REFORM OF THE ARMED FORCES WITH MOD —- A RESTRUCTURED ARMY WITHOUT IN BUILT AIR & NAVAL SUPPORT REPEATS PATCH WORK ! REFORM IS NEEDED !