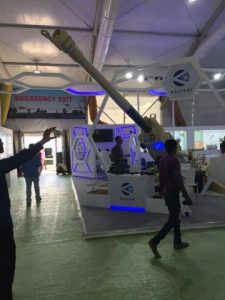 DEFEXPO-2018 with military fanfare and bandobast opens on the East Coast Road located near Kollam on the narrow East Coast Rd not very far from Mahabalipuram on the seaside  and this is a Preview  on April 10.th.

If you do not attend this may help and if you attend see TATA’s South African partnership for jammer and EW station with Grintek, Kalyani with Turkey for UWAVs Navy is looking at, the Naval shipyards foreign tie ups and Vikrant’s  progress, Israel’s new Torpedo stopper and jammers and mortar firers and AK -103. No technology is barred for India and they know India is agold mine no matter who rules India and India’s fine military are professional led by non professional bureaucrats. War is serious business Churchill said after he headed the 1916 Tank Committee to make new tanks so later could win the war.

R.E.   Rogers the  transport contractors and decorators and many foreigners were seen racing  to present their wares at the show  on April 11th and PM comes ‘a fasting’ a new gimmick for foreigners to note  on 12thand IDF prays the Kaveri river water  trouble makers who showed up to protest IPL do not wave Black Flags to spoil “India: The Emerging Defence Manufacturing Hub”.

India is the world’s No 1 importer again and it is the complicated rules of successive DPPs, legal hassles, no single vendorpermeations, random wide band black listing,  with no convictions L1 syndrome and suspicious CVC  and political dramas and  lack of traction to Make in India. No strategic partnership rules to make this possible by private players (except for the Navy and shipyards and some big private players) that PM Modi so well articulated on 15thAug 2014 just after taking over from Red Fort ! Great speech it was like Mark Antony’s at Caesar’s funeral. 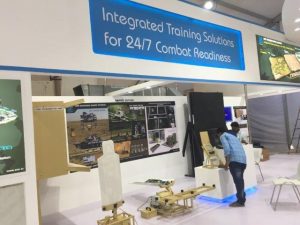 But as they say  about PM Modiin Golf terms his swing and ideas and  swing looks and feels  great;  but there is no follow up . He travels and  has little time for follow up and embarks on another.   Nepal still looking to convert DOMONET.There have been  four changes for Defence Ministers who have adorned South Block with ideas and statements.   All had no previous experience of defence which has MOD the most complicated ministry to run as mini wars on borders are running consuming time.   And now elections are near.

But we seem  ready to call 44 Attaches to go tell the world we are serious as a Defence Manufacturing Hub to export. Are 47 Delegations not enough to be fed prices and shown stuff.It is the most debated issue on the net among the Armed Forces as  a news report reads,“It is perhaps more coincidence than design that when Delhi is seeking to project itself as a credible manufacturer of major platforms and a potential exporter of such inventory, the Indian Air Force has announced (April 6) that it is re-opening the procurement process for 110 fighter aircraft.   This is an order that is potentially worth $12 billion and will attract the attention of the global aviation industry”.

Lockheed is delighted it is back in the race for single engined F-16s to only down SAAB’s Gripen and will be L1 as USA sets it bar to sell to PM Modi.

IDF adds India will have to pay $ 8 bill for 36 Rafales and India has to pay for 16 Chinooks, 24 Apaches, four more P8is, four Krivacs (two import and two shown at DEFEXPO as to be built at Goa Shipyard Ltd, rifles for the Army and Air Refuellers for IAF and many helicopters 226 and Vajra 155mm guns coming from South Korea and BAE light 155mm guns in kits from USA shown at DEFEXPO so India will be a big importer still. 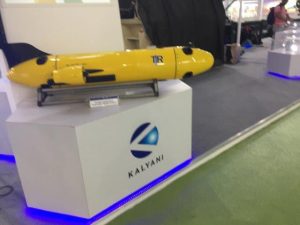 DefenceMinister NirmalaSithraman has previewed the show site  and the Tri Service rehearsal showing  by the Armed forces from  the sea shore viewing gallery  with tanks  and guns and vehicles on display kicking up dust and firing seawards and aerobatics before Gagan Shakti  in the air by IAF, and naval ships performing not far from the coast.   On 11th RM will commission CGS Vikram first of seven AOPVs built by Larsen and Toubro Ltd for the Coast Guard in record time and then come to the show. And have a press conference. 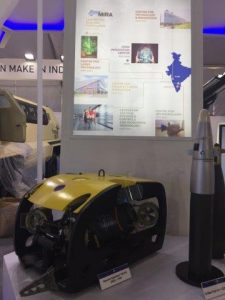 In keeping with the Defence Manufacturing agenda , the MoD announced another  draft Defence Procurement Policy (DPP) 2018 in March for comments with the objective of taking  India to the top five defence producing nations of the world.   This is a highly desirable objective and hope the Modi Government in re-electioncan follow up the great need for India   in the Defenceand self security sector as it  rises.   IDF sees a urge in India to have a say in world affairs and will need economy, internal security, harmony in governance with jobs for the young and military power with better command and control

India is likely to allocate $150 billion over the next decade for procurement and modernisation of military hardware and this must  allow risk taking like Navy did for nuclear submarines from a private player and  the stimulus to nurture meaningful domestic manufacture in some niches areas.  Many are athe show from abroad and big companies have tie ups to Make in India.

However, the feasibility of realising this goal by 2025 can be an exceedingly daunting challenge, given the very modest national manufacturing-cum-R&D base and related eco-systems that India currently has in place. This is evident at the show.

IDF was impressed by the hurried last minute arrangements being made in six air conditioned halls set up in open fields on the sea shore though the show which by earlier standards has fewer exhibitors. 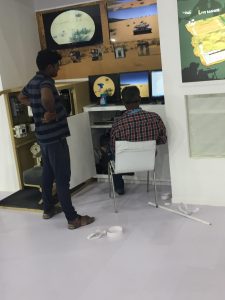 However the organizers have allotted large spaces in the first four halls to the bigger companies like Tatas under the single banner of Tata Aerospace and Defence with foreign collaborators for the Orders for 99 Kestrels with Elbit turret and Bushmaster 30mm gun, PSU Shipyards with their achievements for Make In India for the Navy, Alpha Technologies with strong Israeli support Mahindras and Zen Technologies who have been in the game for years.   Larsen and Toubro Ltd are impressive with many products  and showing their order for the 155mm Vajra guns

Being made in India.   Kalyani and Adanihave  large spaces The.   Large foreign pavilions have been taken up by Russia, Israel,  Naval Group from France South Korea and USA with Boeing and General Atomics.

Two halls have a large number of Indian companies and the defence magazines though it’s a congested hall.

The show included new entrants with projects in bigger stalls this time Punj Group and Yeoman who are connected and Kalyani and even DCM are there with local truck manufacturer Ashok Leyland showing of the Stallion truck with others.

The new feature of the show IDF can report  is many private defence companies have all legally got foreign partners and are now succeeding.   So Defexpo helps them to net work with their customers who can see latest developments and learn about them.   It is a show for professionals but it has to be admitted if short comings are felt at the hurried way Defexpo was announced and set up it will prove how strongly Indians believe in and are good at JUGAD to set up a show in a remote place and may be the idea came from China’s Xi Jinping  who reviewed his military in a remote desert area and they did it ! So can India.

Previous Post: INDIA’S DEFNCE MAY NOT BE ABLE TO PERFORM TO ITS ABILITIES WITHOUT A STRATEGY & NO THEATRE COMMANDS OR CDS FOR SYNERGY AND JOINTNESS– INDIA IS A WORLD POWER WITH CHALLENGES THAT ONLY NSA HANDLES FOR PM ?
Next Post: ONLY DD TV COVERED 10TH DEFEXPO-OTHERS THE BLACK BALLOONS/FLAGS & CROWDS IN BLACK WITH ‘GO BACK MODI’ NARA—YET JUGADY DEFEXPO-18 WAS A PROFESSIONAL’S DELIGHT WITH POLITICAL DISCUSSIONS ON RAPE & FILTER COFFEE !