(With credits to TPS and Prasun Sengupta)

This is an IDF Analysis of the 27TH February air action over restricted Kashmiri airspace which was a near war scenario not seen in recent times, where restraint or luck or events or communications ensured there was no escalation. What if few aircraft were downed ?

Both nations Air Operation Rooms, and Su-30MKis and MiG-21s and MI-17 Helicopter and Phalcon pilots in the air, and F-16s JF-17s and Swedish AWACs and weapon systems of Pakistan must have got a feel of what a live 21st Century fast paced action can be like. This was a trailer of war for sure. Which Ops Room was RM and PM and Chiefs in, with all internet inputs or where ???? begs the question.

An all out conventional war in the 21st Century unleashed by 5th and 10th largest (nuclear) militaries can last only for a short duration with huge destruction. It will put to test all the Nations’ security systems with no CDS, and India’s Cabinet system of decision making vis vis the military of Pakistan in do or die mode in control as it forced the response on 27th despite PM Imran Khan’s reticence at first. 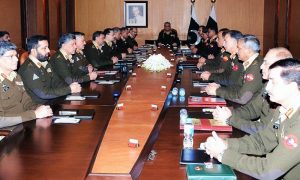 The aerial picture of 27th Feb by Prasun is attached which looks out of Star Wars, and Pakistan Air Chief’s briefing on PAF’s OP Swift Retort needs viewing. It is Impressive. The name was given the day after the ops, more interesting !

ACM Md ANWAR KHAN distributed trophies to assure his country men reeling in the summer heat of a poor economy, water and power shortages and uncertainty of the future with the Pashtuns, Iran and Afghanistan and even China on CPEC, as the world chides it for its support for terror. It is the weapon it uses to spite India. Islamic suicide bombing is baffling and not dying !

“Before raising the ‘winners’ hand at the end of boxing bout in the air, one must understand intercept geometry and intercept profile.

A two aircraft element equipped with suitable weapons is more than adequate to threaten a strike element of even eight aircraft. Situation changes if strike element is escorted by air defence escorts. Intercept elements, four in number comprising of eight IAF air defence aircraft were more than adequate to successfully intercept the PAF strike and AD elements. They did their task admirably well.

Secondly, If the situation map is correct, it appears that PAF strike and AD escort elements were in multi-layered formation. Elements at the lowest level must not have been detected by Indian Radars. 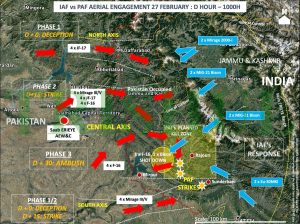 Wing Cdr Abhinandan shot down a F-16 with R-73. An undetected PAF interceptor achieved a lock on Abhi and shot him down. Only Abhi can confirm/deny whether his aircraft was shot down or his aircraft flamed out after R-73 launch forcing him to eject.

He concludes; “No Air Force in the world, USAF included, can prevent a ‘first generation’ strike aircraft flying at ultra low level at 900 kmph from penetrating an intended target/area, notwithstanding no of AWACS, Ground Radars, SAMs and so on.”,

IDF adds it is a professional input by TPS but only the study and debrief of the events and what the Wing Commander and his controller and wing man discloses if he had one, must have clear to Air HQ. Our AA in Islamabad and Mission reports must be of help too to join the dots as Pak TV and media is quite free, and ISPR very active. US intelligence shares with India too, hoping to get us into QUAD and transfer manufacturing from China to India if we agree. Next Government has many dilemmas in hand if it is not BJP. A new driver will need time to settle, especially if it is coalition and times are tension filled even for a CJI. An Indian actor whose wife was in Kuch Kuch Hota Hai who interviews PM for an hour says he is Canadian with two passports ! Not surprising for IDF. Its par in India if you can get away with supports.

Air HQ must have shared details of 26/27th with Navy Aviators who may face similar scenarios and be asked to attack terror targets and NSA would have been briefed as ‘lesson learning’ is what it’s all about at service and national level.

27th was nearest to what combat will be like with Command and Control and alerts. IDF a Taly Ho Controller learns from an Air Marshal that today C&C is much automated and IFF will be on test again if it comes to another such strike by either side which strike is threatened to be used by leaders with missiles, on both sides on the ready.

The flying times are in 10s of minutes for planes between us with powerful one shot kill weapons loaded so response time can be long except by the duty CAPs fully armed. It is keeping all forces tense unless Rules of Engagement (ROEs) are issued and kept updated as all CBMs and gloves between India and Pakistan are off and Pakistan has always used Surprise as its prime Principle of War. They refuse to forget 1971 and now Balakot! This shooting of Mig-21 and the downing of a MI-17V5 that day will become folklore unless an unbiased review is taken.

US and Israelis are already crowing about their weapons and equipment that worked including planes, engines radars, missile warners, pods, jammers and dispensers, ejection seats and communications much imported that were proved as a F-16 was shot down. Prasun reports latest Phazatron Kopyo radar may not be on all Mig-21 Bison. US Indian Mr Vivek Lall who sold $ 13 bill Boeing, BAE and General Atomics wares to India from USA is confident he can sell F-16 in its new designed larger F-21 form now by joining Lockheed and feeding a rather dodgy magazine which has tentacles within the IAF. Giving luxurious advertising is the name of the game to magazines and this once held up the appointment of a fine Air Marshal. But IAF could stick to Mirages for twin engines and Tejas for single engine RFP unless budgets are no constraint.

Around India JEM and it leader Masood AzaAr are finally labeled International Terrorists. JEM has changed name, which is the name of the game when sanctions are imposed or you are caught …..change name and the Bank in advance.

The Islamic State of Iraq and Levant (ISIL) dreaming of athe Caliphate has shown its teeth in Sri Lanka with Al Bagdadi claiming he is well and alive which has added to the regions political woes and Lankan and regional economy will suffer the after effects.

In India no one is willing to talk about 27th and all  this and all say they will after 23rd May and Adm Arun Prakash rightly calls all this a False Dawn in IE of 4th May. BZ for waking all up.

IDF reported Generals are flocking to the BJP who bookies say have odds to win the right to rule in some form even a gathbandan and so more acche din are coming as long as the Generals ensure the communal and religious and caste feelings of RSS which counsels India’s governance through its ranks in Minister ships, Think Tanks and Officialdom are not entered into the fine apolitical all religion all caste all equal fighting force that fights for the integrity of the nation without fear or favour.  Then it is Shan No Varuna.

Previous Post: MILITARY INCLUDING TWO EX CHIEFS & A VICE CHIEF HAVE JOINED BJP TO ADOPT ITS PHILOSOPHY TO PUSH HINDUTVA & HOPE IT IS NOT TO LOOK FOR GOODIES FROM BJP & ARMY IN RETIREMENT ! IDF IS SURE THEY WILL SELFLESSLY FOLLOW THE CHETWOODE SPIRIT & SERVE INDIA TO RISE
Next Post: CASTE IS STILL ALIVE & KICKING —DALIT IAS OFFICER ACCUSES TOP PMO OFFICIAL OF CASTE BIAS,(Print)—-IDF’s NOVEL AN UNDERHAND AFFAIR IS ABOUT HOW DALITS FEEL—CASTESISM & THE BRITISH PERIOD IN INDIA & THE FINE INDIAN NAVY IN WAR & ROMANCE & HOW MI-6 WORKS