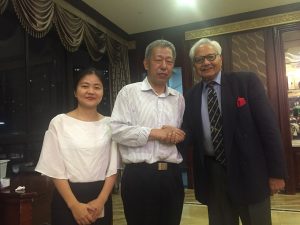 Dear Friends,
I thank the Hainan University that pursues Public Diplomacy for inviting me again to discuss a relationship between two great countries India and China which were friends and rich two centuries ago, then were humiliated by Foreign Powers and cohesion was lost between the two after the 1962 border war. Today both are rising and appear more friendly despite disagreements our relationship will matter in the future of Asia. Xiexie 谢谢 again.
I come at a time when security architecture dominated by the United States, wishes to include India, Japan, and Australia into a QUAD and China US is in a trade war. In March 2018, China’s Foreign Minister Wang Yi dismissed the ‘Indo-Pacific’ as ‘an attention-grabbing idea’ that would ‘dissipate like ocean foam’. Interestingly, however, Chinese thinking seems to have undergone a major transformation since then, turning ‘adversity’ into ‘opportunity’. As the Chinese saying goes, “It doesn’t matter whether a cat is black or white, as long as it catches mice.”
How China and Hainan can contribute in these circumstances will be presented. We have differences. In 2017 India became a member of the China-dominated Shanghai Cooperation Organisation (SCO) with Pakistan with whom India has border issues and China has the CPEC. India’s entry has increased the eight-member group’s heft in regional geo-politics giving it a pan-Asian hue. I am here to present a picture of BRI from India as a member of Indian Maritime Foundation and present these personal views after studying the private meeting between President Xi Jinping and our Prime Minister Narendra Modi at Wuhan in May 2018 and then they met again few weeks later at Qingdao in June to attend the annual (SCO) Summit. India is in the throes of a watershed election with Hindu party BJP trying to win the mandate again.

At the SCO Summit India pitched for concerted regional and global action against terror networks and favored effective connectivity and links to boost trade. USA has been cool about it. Both Wuhan and Quingdao it is reported were to keep the peace on Indo China 3300 km border (Includes TAR) and on Doklam incursion where two armies are faced and deepen ties in areas of trade and investment to nearing $ 1000 billion a year besides reviewing the overall bilateral cooperation. 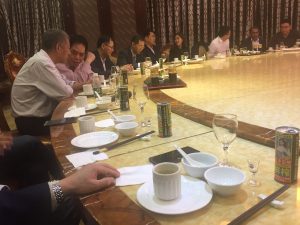 Asia, is home to sixty per cent of humanity, high economic growth and a burgeoning middle class and markets, and India has a large young population. Some of the highest military expenditures in the world is led by China, after USA but is in a state of flux with a trade war. Territorial and maritime disputes have the potential to cast a shadow on peace and stability and we must discuss frankly, as QUAD has cooled.

The Asian landmass straddles the Indo-Pacific. Asia is being defined in the Geographical context of the Pacific (China) and Indian Ocean (India) through which pass the key SLOCs and South China Sea for energy, raw materials and trade. Freedom of navigation, over-flight and commerce is crucial. USA has changed the name of Pacific Command in Hawaii to Indo-Pacific Command to include India.
Today China is well on to achieving the ‘China Dream” 中国梦’with 5 times GDP of India under a dynamic President Xi Jinping and India is under Prime Minister Modi who also promises to raise India. However when a super power like USA is threatened by a rising power like China with No 2 economy in the world and large educated hard working population and a big manufacturing base there will be turbulence.
India by geography and military status can be a swing state and is treading carefully as it has good relations and dependency on Russia too. PM Modi made clear at the Shangri-La Dialogue last year on 1st June. Our common prosperity and security require us to evolve … through dialogue [and] a common, rules-based order for the region … It must equally apply to all individually, as well as to the global commons.

India and China as neighbours must have cordial relations for peace progress and stability in the East and Hainan is the closest maritime state near India. Maritime relations are suspicious with China’s push to Pakistan with CPEC and Gwadar and Ormara and will be watched by the world. This brings in BRI.

With China’s bold promise of new infrastructure to link East and West, China’s ambitious Belt and Road Initiative the BRI has been in the news world over after BRI meeting in Beijing in May 2017 with participation from more than 100 countries, including 29 national leaders and organizations from countries such as Greece, Pakistan and Russia. India abstained and next meeting is due soon and BRI evokes discussion and debates in India, which has interests in BIMSTEC and BCIM and worries on the strategic effects on the Indian Ocean.

The economic fulcrum has shifted towards Asia and China’s economic growth but slowed. India has emerged a fast-growing economy. Asia, however, has fallen short in building a credible security architecture. Trade mechanisms have revealed new frictions. Infrastructure and connectivity with initiatives like BRI are increasingly shaping the economic and political discourse in Asia, with renewed debate on finance to meet strategic ends.

The “Asian Century” appears inevitable but the question remains if it will be uni-polar or bipolar or multi-polar in character. What future will countries such as China, India and Japan opt for? What role will other regional countries play? What are the key interests of external powers that have a traditional presence or alliances in the region?

Power in Asia remains fractured at various levels, marked by a lack of consensus. A ‘multi-polar Asia’ essentially pre-supposes the presence of multiple powers with significant capabilities and influence, equipped to take on responsibilities and respond to emerging challenges and threats with a degree of strategic autonomy. The US is reassessing its presence and commitment to Asia at a time when China has expanded its footprint, including in the maritime space and in the Indian Ocean. Trade frictions between US and China and their divergent visions for the future of the region have encouraged hedging by other regional actors. World growth rate is suffering.

Traditional and non-traditional security challenges such as economic and military competition, climate change, cyber threats, terrorism and energy security confront the region and act as drivers for the development of interdependent collaborative structures promoting pluralism. Multilateral fora such as G20, BRICS, AIIB and the SCO, with cross-cutting membership, are also helping to shape a multi-polar regional order.

In this era of global trade and connectivity, in the 21st century, the geopolitical governance of borders and Geo Politics is shifting from territorial bordering to regional, and possibly global bordering through functional connectivity. New border governance forms have appeared that have yet to be entirely understood by the studies of border disputes. India and China must try resolve border issues with give and take, not bully to let it truly be a line of peace and tranquility. Shipping and sea routes must be free for global economy with least barriers as they say, “ No shipping No Shopping”. More of this by way of UNCLOS and South China Sea later . 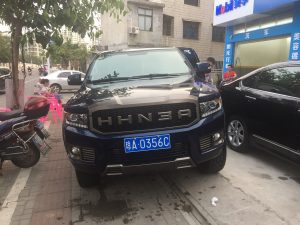 My pictorial presentation is based and argues that borders and flow of trade by open seas is the key to connectivity of non-contiguous territories between countries’ chains of production, of goods and services, and labor markets, for all nations to benefit. rooted in territoriality, sovereign culture and politics.

History is a powerful part of the logic of the BRI, framed as the revival of ancient trade routes across Eurasia by cash rich China. These routes, drove economic and cultural movement along the Silk Road but despite differences between India and China there are areas of co-operation and it is reported the subject of India China Cooperation during President Xi Jinping & Prime Minister Narendra Modi Summit at Wuhan on 23rd May 2018, has for Hainan. Leaders also must have discussed contentious issues to seek co-operation and avoid conflict as not a shot has been fired for the 60 years after the 1962 Indo China war over the Macmahon Line left by the British and China’s takeover of Tibet as an Autonomous Region (TAR). On PM Vajpayee’s meeting with President Jiang Zamin in 2002 Sikkim was resolved vis a vis Dalai The building of China Pakistan Economic Corridor (CPEC) through Pakistan Occupied Kashmir (POK) that is Indian territory, worries India
Needless to say, the Indo-Pacific concept is also gaining traction because of China’s increasing foreign and security policy and assertiveness motivated by the expansive nature of China’s Belt and Road Initiative (BRI). Indian concerns are indeed directly related to the kind of policies and strategies China pursues with countries collaborating with Beijing on BRI projects in Indian Ocean Region where China has built ports like Humbantota in Sri Lanka, Gwadar and Ormara for submarines in Pakistan and established a base Djibouti and moving into Central Asia, Africa, and Europe with a port like Piraeus in Greece. 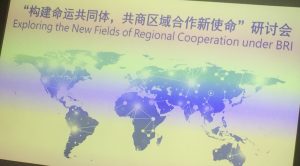 Neither Japan nor India are part of the BRI, but Japan no longer categorically excludes collaborating with China on BRI infrastructure and development-related projects, but the prospects of Japanese contributions to China-driven BRI continue to remain bleak. Tokyo links its contributions to a series of preconditions, which many of the BRI projects do not meet. In this context my presentation seeks co-operation in trade balancing, free seas, more interaction with tourism and youth exchanges and Navy to Navy co-operation.