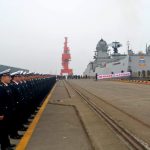 IDF Analysis of IFR and China’s meteoric rise which is turning the world Bi-Polar & 30% of China’s BRI will succeed as China’s vehicle of Globalisation and 70% will enable China’s Global ambition like the Marshall Plan did for USA with debt diplomacy. PLA chose an International Fleet Review (IFR) to celebrate PLA’s 70th Anniversary […] 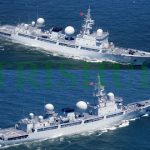 ITS RAINING IMPORTED VAJRAS/777s/ATAGs/ AK-203 GUNS TO MEET CHINA WITH ALGs & 24 APACHES &16 CHINOOKs & 36 RAFALES & SU30MKIs BUT HOME BUILT NAVY’S EXPANSION IS SLOWED TO 27-PLATFORMS FROM 44 & DELAYED—CHINA’S PLA(NAVY) VOWS TO LOOK LIKE US NAVY IN 15 YEARS WHEN ITS BRI/MSR & SPACE PLANS FRUCTIFY—–XI JINPING EXTRACTED TIME AT WUHAN??

IDF Analysis On The Hiatus In The Maritime Rise Of India. Is it Money Crunch or Poor Planning. Many Navy platforms are aging ?? USA is pushing India to join a pact in QUAD to meet China unmindful India is tied with Russia and is in SCO. Thanks to India’s economy heading upward of $ […] 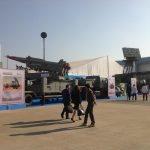 This is a 45 day later IDF Analysis post Phulwama and Balakot air attacks and the daylong aerial engagement, the first ever hot air actions over Kashmir in the sub continent after KARGIL on 26th and 27th Feb 2019.  The two days involved some total of some 20 Su-30MKIs, Mirages, MiGs, Phalcon AWACs from North […] 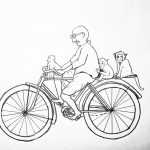 An IDF Analysis of the Official Secrets Act OSA 1923) plots along the way. The book Indians Why We Are What We Are had explained Jaguars, Bofors and HDW deals and Op Pawan and Intelligence.   Today Agusta 101 and 36 Rafales have joined. Unlikely, anything will happen but services suffer. IDF’s novel AN UNDERHAND […] 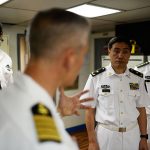 Cmde Retd Ranjit B Rai Ex Vice President Indian Maritime Foundation Dear Friends, I thank the Hainan University that pursues Public Diplomacy for inviting me again to discuss a relationship between two great countries India and China which were friends and rich two centuries ago, then were humiliated by Foreign Powers and cohesion was lost […] 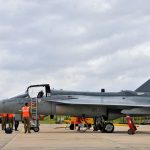 THIS IS A IDF BRIEF REPORT MADE SIMPLE ON BALAKOT ATTACK & KARGIL BOTH BY PGMs IS A IDF’S SALUTE TO MIRAGE 2000s —-THE HEROES IN BOTH FORAYS WITH  INPUTS ON NAVY NEEDING PLATFORMS ! NATIONS NEEDS CDS & JOINT GROWTH FOR SECURITY WHICH DOES NOT COME CHEAP ! The IAF procured 59 Mirage-2000Hs (7 […] 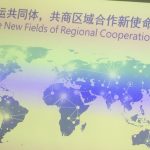